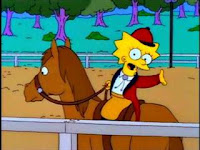 Or the One Where: Homer buys Lisa a pony.

The Setup: After failing to bring Lisa the saxophone reed she needs for the school talent show, Homer buys her a pony to repair their relationship.

Notables Notes: Lisa's desire for a pony was established before this episode (it's actually mentioned in the very first episode, Simpsons Roasting on a Open Fire) but it comes to a head here.

Lunch Lady Doris appears for the first time, as one of the talent show judges.

Dan Castellaneta, received an Outstanding Voice-Over Performance Emmy in 1992 for his performance in this episode.

Marge: Mmm...I am very upset with you.
Homer: Sounds like someone's angling for a pony of her own!

Marge: Homer, just where were you planning to keep this horse?
Homer: I got it all figured out. By day, it'll roam free around the neighborhood, and at night, it'll nestle snugly between the cars in our garage.
Lisa: Dad, no!
Marge: That's illegal!
Homer: That's for the courts to decide!

Marge: We're just going to have to cut down on luxuries.
Homer: Well, you know, we're always buying Maggie vaccinations for diseases she doesn't even have!
Marge: Actually, I was thinking we could cut down on your beer.
Homer: Nah, we're not going to be doing that.

Lisa: I gave up the pony.
Homer: You did?
Lisa: Mm hm. There's a big, dumb animal I love even more than that horse.
Homer: Oh no! What is it, a hippopotamus? 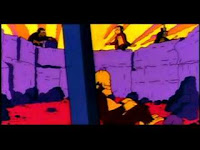 Teebore's Take: Not much to say about this one. Definitely more heartfelt than it is humorous (it suffers from a lack of a purely humorous B story, such as Bart's karate lesson in When Flanders Failed), there's still plenty of funny to be found (it's kinda sad how the joke about gas prices is just as relevant today as it was almost twenty years ago). This episode is another entry in the large subset of "Homer pisses someone off and has to redeem himself" episodes, not the worst such endeavor, but not the best either. It also features references to 2001: A Space Odyssey (Homer's dream of being a chimp at the beginning) and The Godfather (Lisa wakes up with the horse in her bed), two cinema classics the show will go on to reference repeatedly.

Lisa finally gets her pony and we get our first encounter with C-List character Lunch Lady Doris, but otherwise it's not very notable. 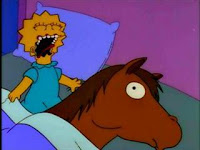