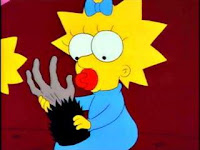 Or the One Where: Lisa's nightmare (a wish-granting Monkey's Paw leads to alien domination), Bart's nightmare (Bart is an omnipotent being who grows to love his father) and Homer's nightmare (his brain is transplanted into a worker robot by Mr. Burns).

The Setup: Following trick-or-treating, Lisa, Bart and Homer all gorge on candy, which gives them all nightmares.

Notable Notes: Marge once again warns the audience about the content of the show before it begins.

The "scary names" tradition, in which the names in the credits of the Halloween episodes are altered to scary or humorous effect, begins with this episode. 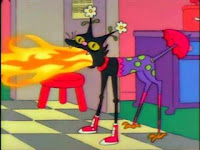 Favorite Lines
Lisa: I wish for world peace.
Homer: Lisa, that was very selfish of you!

Kang: It seems the earthlings won.
Kodos: Did they? That board with a nail in it may have defeated us. But the humans won't stop there. They'll make bigger boards and bigger nails, and soon, they will make a board with a nail so big, it will destroy them all!

Marge: Goodness, what's wrong?
Bart: We both had nightmares.
Lisa: Can we sleep with you?
Homer: You both toilet trained?
Bart and Lisa: Yes! 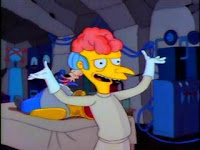 Teebore's Take: A solid improvement over the first Halloween outing, this episode draws inspiration from short fiction (W.W Jacobs The Monkey's Paw), The Twilight Zone and Frankenstein. While there are individual segments from other Treehouse episodes I enjoy more, all three of these stories are very good, with equal parts humor and Halloween-ness. The Monkey's Paw segment, teaching us the danger of simplistic wishing and culminating in Homer's wish-granted turkey sandwich being a little dry, is a Simpsons classic in its own right, and easily my favorite of the three (though Mr. Burns' turn as a mad scientist is close behind it).

Both a classic Halloween episode and an overall classic.

The framing sequence of trick-or-treat candy inspired nightmares and the general creepiness and unreality of all three stories help make this episode feel suitably Halloween-y. 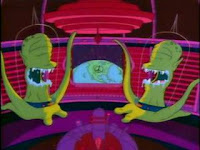