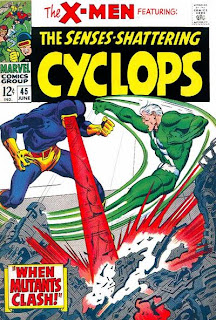 In a nutshell: Cyclops fights Quicksilver

Plot
Worried that Angel has been gone too long and may have been recaptured, Cyclops strains his power against his bonds and manages to break free. He comes across the imprisoned Marvel Girl, but is unable to wake her from unconsciousness. Knowing he can't face Magneto alone, Cyclops moves on, hoping to locate and free Beast and Iceman. Meanwhile, Angel arrives in New York City and proceeds to Avengers Mansion.

Back at Magneto's island, Toad discovers the escaped Cyclops and alerts Magneto, who sends Quicksilver to deal with him while Magneto disciplines Toad. At first, Quicksilver talks with Cyclops, trying to convince him that Magneto has the best interests of mutants in mind. Unable to sway him, Quicksilver attacks, and the two mutants battle one another before Cyclops gains the upper hand and knocks out Quicksilver. Just then, the Avengers arrive and see Cyclops standing over their former teammate...

2nd Story: And the Mob Cried Vengeance!
Bobby refuses to leave the jail with Cyclops, believing he will receive a fair trial and be exonerated for acting in self-defense. Cyclops tries to convince him that the mob outside has no interest in giving him a fair trial, and when Bobby stays put, Cyclops blasts him out of the cell. Bobby reflexively covers himself in ice, and the pair proceed to fight their way across town. Eventually, they collapse from exhaustion, just as the sheriff catches up to them.

Firsts and Other Notables
The main story continues and concludes in Avengers #53, making this the first true X-Men crossover, something the X-Men will become synonymous with by the nineties. Avengers #53 details Angel's encounter with the Avengers who, after discovering an electronic bug hidden on Angel, become suspicious of the X-Men. When the Avengers arrive on Magneto's island, he turns his mind control device, intended in issue #43 to enslave humanity, on the X-Men, and the two teams square off. Eventually, everything gets sorted out (the Avengers never suspected Angel, and played along to draw out Magneto) and the Brotherhood, including Toad (who is sick of the abuse he suffers despite being Magneto's most loyal servant), turn on Magneto, who plummets to his apparent death.

A Work in Progress
Cyclops' power is a bit dodgy in this issue, as he escapes by somehow using his optic blast to open his visor, and then puts as much energy as he can into blasting off the lead Magneto placed over his eyes. Except he shouldn't be able to blast through his visor, made of the one material that stops his power, and he shouldn't have any trouble blasting off the lead, considering lead is NOT the one material that stops his power.

Ah, the Silver Age
Instead of, I dunno, doing something villainous (maybe working on that mind control machine...) Magneto is apparently just chilling on his throne when Toad arrives with news of Cyclops' escape. 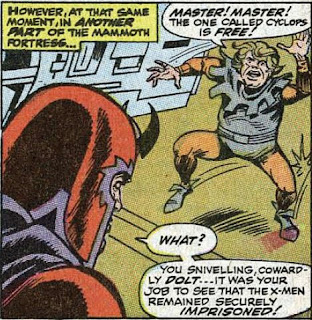 It's the Might Marvel Age of Hyperbole (and corner cutting)! 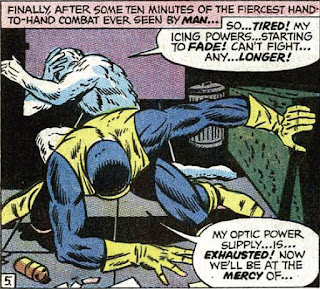 Human/Mutant Relations
More of the fun you've come to expect with the lynch mob in the backup.

For Sale
Before there was fantasy baseball... 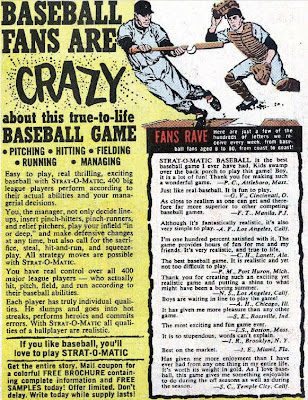 Teebore's Take
Cyclops is the headliner in what amounts to an issue-long fight scene intended to kill time before the story gets resolved in Avengers #53. That said, it's a rather good fight scene backed by art that, aside from in a few places, is also quite good. The abbreviated page count (because of the space allotted to the backup story) also helps keep it from feeling too padded. Of course, I'm not going to complain too much about an issue that showcases Cyclops. The backup story, meanwhile, is downright awful. Instead of a lame villain like Jack O'Diamonds, we've got Cyclops indiscriminately blasting Iceman when he refuses to leave jail and proceeding to fight him across town for no apparent reason.
Newer Post Older Post Home
Posted by Austin Gorton at 5:00 PM