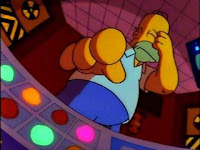 Or The One Where: Homer earns unwanted fame after averting a meltdown.

The Setup: By sheer luck, Homer manages to push the right button to stop a meltdown of the power plant.

Notable Notes: Basketball player Earvin "Magic" Johnson guest-stars as himself in this episode, becoming the first pro athlete to appear on the show.

Mr. Burns' line, " Oh, Smithers, I guess there's nothing left but to kiss my sorry ass good-bye" represents the first time the word "ass" was spoken one of the show by one of the characters. 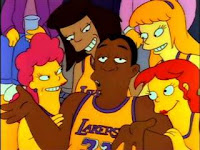 Favorite Quotes:
Bart: They're official Krusty the Clown walkie-talkies! I'll keep one and you keep one. Now, whenever you want to talk to me, just call me on the phone and tell me to turn on my walkie-talkie.

Loudspeaker: Ninety seconds to core meltdown.
Smithers: Sir, there may be never be another time to say... I love you, sir.
Burns: Oh, hot dog. Thank you for making my last few moments on earth socially awkward.

Marge: Dear Lord. If you spare this town from becoming a smoking hole in the ground, I'll try to be a better Christian. I don't know what I can do... Mm... Oh, the next time there's a canned food drive, I'll give the poor something they'd actually like, instead of old lima beans and pumpkin mix.

Milhouse: Bart, my mom won't let me be your friend any more. That's why you couldn't come to the party.
Bart: What's she got against me?
Milhouse: She says you're a bad influence.
Bart: Bad influence, my butt! How many times have I told you? Never listen to your mother!

Barney: I had to give a speech once. I was pretty nervous, so I used a little trick. I picture everyone in their underwear. The judge, the jury, my lawyer, everybody.
Homer: Did it work?
Barney: I'm a free man, ain't I? 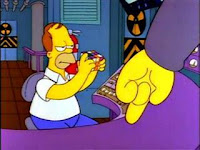 Teebore's Take: The aptly named Homer Defined does much to cement Homer's status as a lovable doofus, one who, per the definition next to his name in the dictionary at the episode's end, succeeds "despite idiocy". The first act is wonderfully dense, packed with one bit of hilarity after another as Springfield deals with the imminent meltdown: the plant workers panicking, Burns glad-handing the media, Marge praying, the old people changing the channel, Principal Skinner leading the children in "duck and cover", and Homer, through it all, flailing around trying to figure out what to do, whether by reading the manual ("Congratulations on your purchase of a Fissionator 1952 Slow-Fission Reactor..."), recalling his training (which he ignored in favor of a Rubik's Cube) or, ultimately, using "eeny meany miney moe" to select the correct button to avert the meltdown.

Homer's rise and fall from unwanted and unwarranted fame in the A-story is once again backed up by Bart's B-story, in which Bart and Milhouse's friendship is put to the test by Mrs. Van Houten's belief that Bart is a bad influence on her son. It once again shows how much more there is to Bart beyond the crass prankster, and gives Marge a nice scene in which she goes to bat for her admittedly troublesome son.

"Pulling a Homer" never quite entered real world vernacular the way other words and phrases from the show did, but this is still a hilarious and endearing look at Homer. 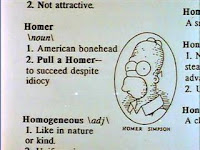