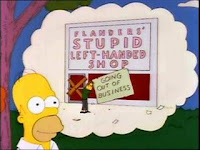 Or the One Where: Flanders opens the Leftorium and Bart learns karate.

The Setup: At a neighborhood barbecue, Flanders announces he's opening a store that caters to lefties, after which Homer wishes for it to fail.

Notable Notes: According to the DVD commentary, this episode is filled with numerous animation glitches because the studio was breaking in a new group of animators with it. Since it was produced in the spring as part of season two, intended to air in the fall with season three, there was time to correct the more egregious errors, though many minors ones were left uncorrected.

Like Flanders, Moe and Mr. Burns are shown to be lefthanded in this episode (as is Matt Groening, a fact which will no doubt please my wife as I tease her for being left-handed).

The idea of Flanders' failed business being a left handed store came from one of the writers, who had a friend who opened such a store only to be forced to close it due to a lack of business. 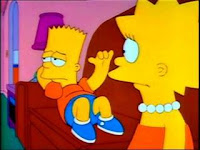 Favorite Quotes:
Marge: Bart, how many hours a day do you watch TV?
Bart: Six. Seven if there's something good on.
Homer: Marge, TV gives so much and asks so little. It's a boy's best friend.

Akira: We learn karate, so that we need never use it.
Bart: Um, excuse me, sir. I already know how not to hit a guy. Can we break out the nunchucks?

Lisa: Dad, do you know what Schadenfreude is?
Homer: No, I do not know what shaden-frawde is. Please tell me, because I'm dying to know.
Lisa: It's a German term for `shameful joy', taking pleasure in the suffering of others.
Homer: Oh, come on Lisa. I'm just glad to see him fall flat on his butt! He's usually all happy and comfortable, and surrounded by loved ones, and it makes me feel...what's the opposite of that shameful joy thing of yours?
Lisa: Sour grapes.
Homer: Boy, those Germans have a word for everything!

Homer: Hey, boy! How was class?
Bart: Today, we learned how to rip a man's heart out and show it to him before he dies!
Homer: Ooh. That'll learn him.

Ned: At times like these, I used to turn to the Bible and find solace, but even the Good Book can't help me now.
Homer: Why not?
Ned: I sold it to you for seven cents.
Homer: Oh. 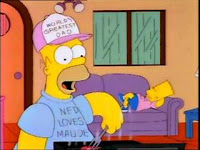 Teebore's Take: Ah, the episode which taught me the meaning of schadenfreude years before my first German class. "When Flanders Failed" is a great example of the show's ability to turn to its plethora of supporting characters for humor and story ideas. In the episode which first established Homer's animosity towards Flanders (season two's "Dead Putting Society"), Bart remained a central figure, the instrument of Homer's one-upping of Flanders. Here, Homer steps into the spotlight, and shades of later seasons' "jerk-ass" Homer can be seen as Homer actively brings about and then revels in Flanders' misfortune before realizing he's gone too far. Bart, in an era in which he and Homer are jockeying over who is the show's star, gets a solid B story in which he fakes learning karate, with hilarious results.

A great Flanders ep that introduces the Leftorium and foreshadows the rise of Jerk-Ass Homer while giving Bart plenty to worth with in the subplot. We'll forgive the fact that apparently everyone in Springfield but the Simpsons is left-handed. 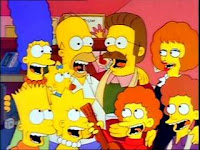