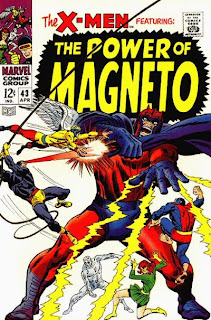 In a nutshell: In the wake of Professor Xavier's death, Magneto returns!

Plot
Watching the funeral of Professor X from afar, Magneto observes Quicksilver approaching the proceedings. The X-Men spot Quicksilver as well, and suspicious, confront him. Quicksilver only wishes to pay his respects, and his working up the courage to ask the X-Men for help, but their hostility towards him chases him back to Magneto. The X-Men return to the mansion and discover a recording Professor X made before his death, telling them that Marvel Girl now shares his telepathic abilities, which they will need in confronting a newly-returned Magneto.

Back at Magneto's base on an island in the Atlantic, Quicksilver tends to the injured Scarlet Witch, and Magnetor asserts his promise to help her, saying the supplies he needs will be on a ship passing by within the week. Magneto keeps to himself thoughts of how he caused Scarlet Witch's injury in the first place, in order to keep her and Quicksilver under his sway. A week later, Magneto uses his power to draw a cargo ship in one of the nearby sea lanes to his base, not knowing the X-Men are stowed aboard, having deduced that Magneto was after the computer the ship was carrying. The X-Men burst forth from the ship and attack Magneto and the Brotherhood, but Magneto gets the upper hand and incapacitates them. With the computer from the ship, Magneto is able to complete a device that will enslave mankind, with the X-men at his mercy. 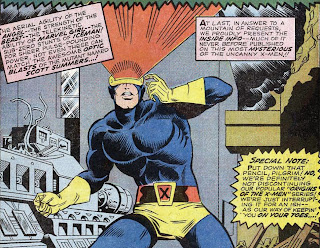 Firsts and Other Notables
Magneto returns, having finally escaped from the Stranger's planet (having been returned there after his last breakout in issue #18), as chronicled in Avengers #47-49. In those issues, Magneto returned to Earth and kidnapped Quicksilver and Scarlet Witch in order to rebuild his Brotherhood of Evil Mutants. Being Avengers at this point, they naturally resisted, though Quicksilver became interested when Magneto announced his plan to use his newly-acquired island base as a refuge for mutants. At the UN (where Magneto demanded they recognize a separate nation for mutants) Magneto manipulated events so that Scarlet Witch was grazed by a bullet, leading Quicksilver and Scarlet Witch to retreat to his base with Magneto so that Magneto can try to heal Scarlet Witch, which is where they are when this issue begins. 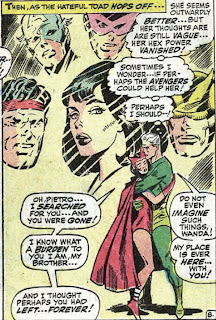 Marvel Girl now has telepathic powers. A pre-recorded Xavier (presumably the real one, and not a pre-death Changeling) explains that he "gave her" some measure of his power so the team wouldn't be without telepathy, but later stories reveal that Marvel Girl has always possessed telepathy, but that Xavier blocked her access to it until she could properly handle it. Thus, it can be assumed that Xavier removed those blocks just prior to this issue. 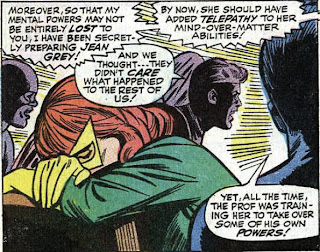 This is Roy Thomas' final full issue of his first run on the book (though he'll be credited with plots on the next two issues). More on that in the next issue.

A Work in Progress
Xavier has no friends or family, apparently, as only the X-Men attend his funeral. It's mentioned that FBI Agent Fred Duncan couldn't attend lest the partnership between him and the X-Men get exposed, and that Banshee is off on a mission. 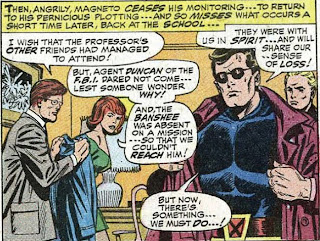 The extra time Professor X and Marvel Girl were spending together in previous issues is revealed to have been spent secretly training Marvel Girl in the use of her telepathy, which further explains why she was in on the whole "Xavier is dying" secret. The retcon in issue #65 will further expose other secrets to which Marvel Girl has been made privy.

The backup story reveals that Cyclops' optic blast is solar powered and that there's a button in his glove which opens his visor so he doesn't have to bring his hand to the visor anytime he wants to shoot a beam. 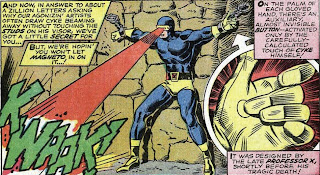 Ah, the Silver Age
Why use a 35mm camera or an "in the event of my death" note when there's Kirbytech?!? 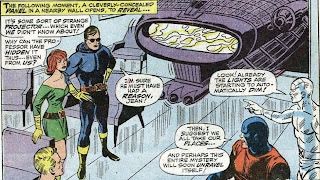 Magneto forces Toad to wear a metal belt so he can more easily discipline him.

Toad attacks the X-Men with a battering ram, heavy on the ram.

Even stone is useless against Magneto. 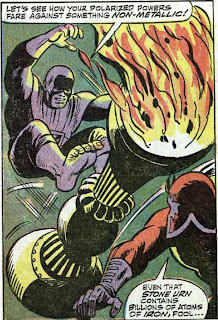 For Sale
Is your home lacking in dramatic beauty? 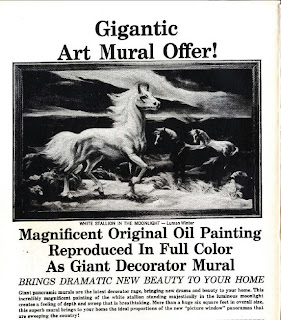 Ladies, are you just too skinny? 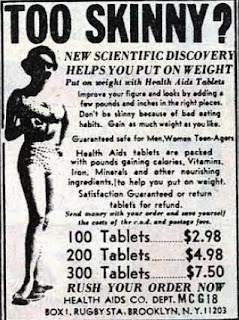 Teebore's Take
The attempts to boost the X-Men's sales continue, bringing back their #1 villain for a crossover with the higher-selling Avengers book. This particular crossover is less crass, however, as it makes sense to bring the X-Men and Avengers together. Roy Thomas was writing both books, for one thing, and both sets of characters were connected thanks to Quicksilver and Scarlet Witch, current Avengers and former X-Men villains. As a result, this story feels more natural and less random than some of Thomas' previous X-Men yarns. To this day, the X-Men and the Avengers have a unique shared history, and while the two teams previously met in issue #9, much of that history begins with this story.
Newer Post Older Post Home
Posted by Austin Gorton at 5:00 PM