The re-positioning of the two day MCBA comic book convention from its traditional fall dates to ones in mid-May posed several questions: would we be able to book enough big-name creators (one of the stated reasons for the switch)? Would enough people attend, given the 20+ year history of having the two day show in the fall? Would basement-dwelling geeks be able to resist the lure of gorgeous Minnesota May weather?

Thankfully, the answers to all three questions was "yes", as the inaugural SpringCon was a smash success, with a record number of attendees and money raised for MCBA's twin charities, the Lupus Foundation and the Comic Book Legal Defense Fund. The crowd was bigger and more diverse than ever; while the stereotypical comic geek was out in force, there were also many women (and not just bored girlfriends), children and families interacting with creators, attending panels, and perusing the dealers' wares.

As has become the norm, for me, most of SpringCon flew by in a blur. Mrs. Teebore was back again, ably manning the check-in desk, dispensing info and taking no guff, making sure dealers and creators were handled appropriately. Costumed attendees were out in droves once more, including the local Imperial 501st chapter of Star Wars enthusiasts and the regular crowd of (mostly) DC characters. 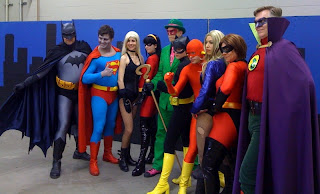 In addition to the Batmobile, there was also a customized DeLorean, right out of Back to the Future. I could almost hear Doc Brown screeching "1.21 gigwatts!" 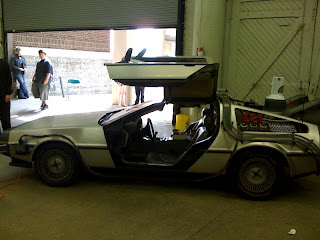 The Propatorium was back, with their collection of nifty, handmade movie props, including a Ghostbusters trap and Robocop's gun. 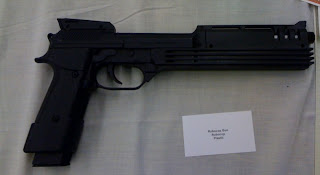 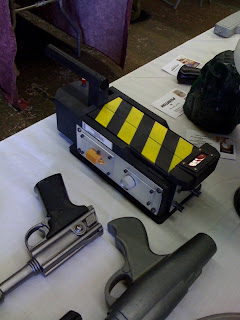 The creator everyone was buzzing to see this year was Jim Shooter, comic scribe, former editor-in-chief of Marvel Comics and a giant (literally and figuratively) of the comic industry. Shooter remains a divisive figure from his days as EIC at Marvel, where he ran things with a firm hand and often overruled creators (personally, I miss the days of the tight, cohesive Marvel Universe of Shooter, though I'll freely admit some of his editorial fiats were intrusive to the creative process and/or downright bizarre). On Sunday, after Shooter finished signing the entire box of comics the douche-nozzle ahead of me had him sign, I asked Mr. Shooter to sign my copy of the Secret Wars paperback (one of Shooter's more commercially-successful brainchilds) as well as three issue Avengers story he wrote in which the team faces off against a super-charged Count Nefaria (one of my favorites).

When he come upon the Avengers issues, Shooter began paging through one of them, remembering that John Byrne had done the art on that story early in his career. Shooter then proceeded to share with me and the other people waiting in line a story about how, when he first received Byrne's art for the story, Shooter had to talk to him about not making the action like a kung-fu movie, in which each Avenger approached Nefaria one-on-one, instead of en mass, as a team. Which then led to him explaining how both Byrne and Frank Miller would give him the same kinda look when he critiqued their art, a look which seemed to say "you're crazy, and the way I drew it is better." The whole time, I outwardly nodded and smiled, doing my best not to come off as a major geek, while inside, I was completely geeking out, squeeing that JIM SHOOTER was telling me a story from the old days of the Marvel Bullpen!!!

I also said hello to Jeff Parker, a fan-favorite writer at Marvel who specializes in fun, back-to-basics stories and is currently charting the course for the Hulk's line of books. I asked him to sign my copy of X-Men: First Class and got a nifty Cyclops sketch to boot (without asking--it's like he KNEW, somehow, that I loved Cyclops). 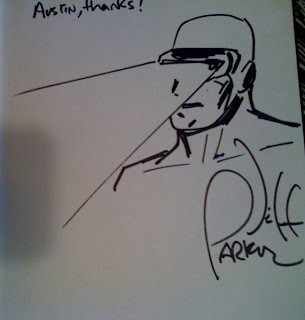 Also in attendance was Georges Jeanty, the phenemonal artist of Dark Horse's Buffy: Season Eight comics. Mrs. Teebore and I picked out one of the prints he was selling and had him sign it for us. 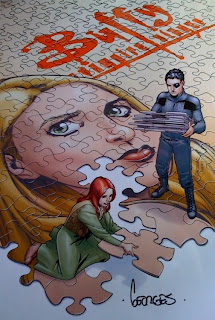 Then we swung by Anthony Hary's table, one of our favorite local artists, and I commissioned what turned out to be a gorgeous Cyclops sketch. 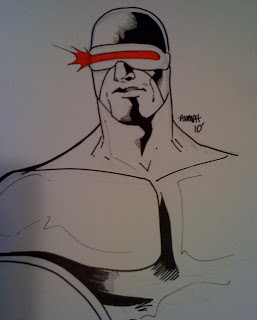 Along the way, I picked up plenty of swag for myself. I am an uber-geek for Marvel's encyclopedia-like Official Handbooks, and found a volume I needed heavily-discounted, along with a handful of black and white Essential volumes. 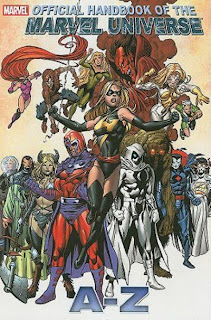 #13 (the second appearance of Juggernaut) now holds the distinction of being the oldest X-Men comic in my collection. The copy is by no means in mint condition, but in much better shape than the $10 I paid for it.

As with Fallcon in the past, SpringCon finished out its final hours with the annual charity art auction, and I snagged a pile of great stuff for an embarrassing price. Amongst the highlights was this gorgeous Hulk sketch from Terry Beatty... 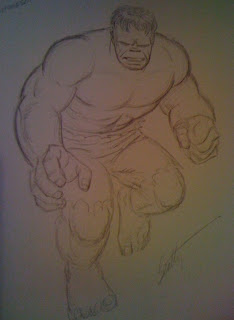 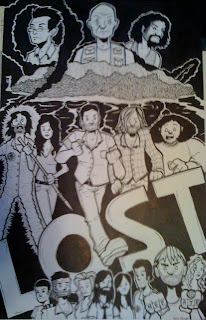 After that, there was nothing left to do but go home and bag-and-board some comics!
Newer Post Older Post Home
Posted by Austin Gorton at 12:00 PM