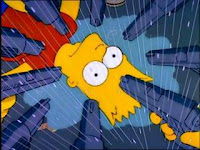 Or the One Where: Bart goes to work for mobster Fat Tony.

The Setup: A particularly bad day for Bart ends with him stumbling upon the hangout of Fat Tony, who is charmed enough by Bart to offer him a job at his social club.

Notable Notes: Fat Tony, voiced by Joe Montagna, appears for the first time, as do his henchmen, Legs and Louie.

Much of this episode is parodying "Goodfellas", though the original draft of the script was written before the movie was released. Afterwords, it was tweaked to more specifically reference the film.

Neil Patrick Harris lent his voice to a small part at the end, in which Harris is seen playing Bart in a ridiculously inaccurate made-for-TV version of the episode's events.

Homer: How much does it pay?
Bart: Thirty bucks a week!
Homer: Pfft! I make more than that.

Chief Wiggum: Fat Tony is a cancer on this fair city. He is the cancer, and I am the... um... What cures cancer?

Bart: Uh, say, are you guys crooks?
Tony: Bart, um, is it wrong to steal a loaf of bread to feed your starving family
Bart: No.
Tony: Well, suppose you got a large starving family. Is it wrong to steal a truckload of bread to feed them?
Bart: Uh uh.
Tony: And, what if your family don't like bread? They like... cigarettes?
Bart: I guess that's okay.
Tony: Now, what if instead of giving them away, you sold them at a price that was practically giving them away. Would that be a crime, Bart?
Bart: Hell, no!
Tony: Enjoy your gift. 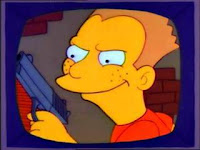 Teebore's Take: Much has been made of the unreality that perpetuates modern Simpsons episodes (to the point where my own reviews of the show's eleventh season rank each episode's zaniness on a scale of Great Gazoos) but the show's desire and ability to bend (or break) reality was present even from the relative beginning, and this episode, at the dawn of the show's golden age, is an example of that. On the surface, Bart inadvertently working part-time in a mobster's club doesn't seem as over the top a concept as a secret race of murderous jockey elves attacking Homer, but consider that this episode begins with ten-year-old Bart having a really bad, but otherwise ordinary, day and ends with him in court, legitimately on trial for being the head of an international crime cartel. While at times the zaniness will grow so out of control as to almost make the show unwatchable, it's important to note that "The Simpsons" has never been afraid of throwing reality out the window and going over the top in the name of humor, to varying levels of success (and this episode certainly is a success), even in the best of times.

The introduction of Fat Tony (and by extension, the mob) expands the ever growing canvas of "The Simpsons" alongside one of the better Bart outings. 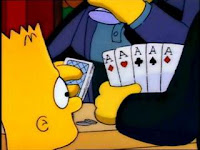