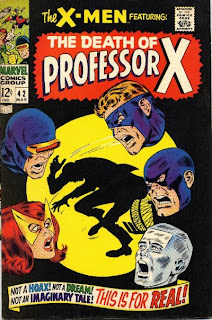 In a nutshell: Professor X dies!

Plot
With Cyclops and Beast fighting Grotesk, Iceman and Angel are shocked that Professor X won't let them return to the fight, ordered instead stay at the mansion with Marvel Girl, who reluctantly sides with Xavier. Grotesk's fight with the X-Men is cut short, however, when he suddenly has a mental image of someone operating the Nuclear Oscillotron. Knowing where to find it now, he abandons Cyclops and Beast. The two X-Men return to the mansion and Marvel Girl continues to keep the male X-Men from leaving on orders from a now-absent Professor X.

Meanwhile, Grotesk arrives at the college where the Nuclear Oscillotron is located only to fall into a trap set by Professor Xavier, disguised as the machine's inventor and attacking Grotesk with mental bolts. Unable to stop Grotesk from activating the machine, Professor X calls the X-Men to his aid. They battle Grotesk while Professor X and Marvel Girl attempt to use their combined mental powers to stop the Oscillotron. Shutting it down, Grotesk leaps for the device, causing it to explode and fatally wounding both Grotesk and Xavier. Dying, Professor X explains that he held the X-Men back because he didn't want them risking their lives against Grotesk when Xavier was already dying  from an incurable disease. Grief-stricken, the X-Men carry the body of their fallen mentor from the rubble. 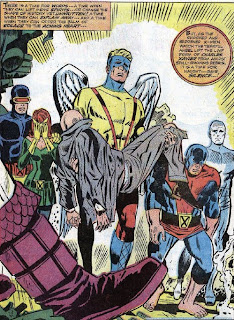 2nd Story: "The End...Or the Beginning!"
The Living Diamond attacks Professor X, but finds his movements sluggish. Scott, determined to protect Xavier, forces Jack back with an optic blast. He and Xavier hide themselves inside the power plant, where the Ultra Sonic Vibration Inducer resides. Xavier believes this device is their only hope of stopping the Diamond. As Jack smashes into the room, they activate the device, and the Living Diamond begins to vibrate and move even slower than before. Xavier tells him his only hope of survival is to relax and go limp, but Jack refuses to go back to being a powerless nobody and continues to fight back, causing his body to explode. Scott is aghast at having helped kill the Diamond, but Professor X takes him back to the mansion and asks him to become the first of his X-Men. Scott agrees, receiving his ruby quartz visor to help control his power and the codename Cyclops. 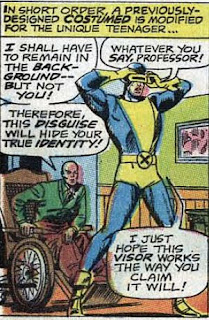 Firsts and Other Notables
Well, Professor X dies in this issue. But not really. A later story will establish that this issue actually details the death of the Changeling, who, after learning he was dying from an incurable disease, approached Professor X behind the scenes, hoping to make amends for his villainous actions in the time he has left. Why Xavier asked Changeling to impersonate him, and what Xavier is doing while the Changeling is dying and the X-Men are erroneously mourning the death of their mentor, will be revealed in time. 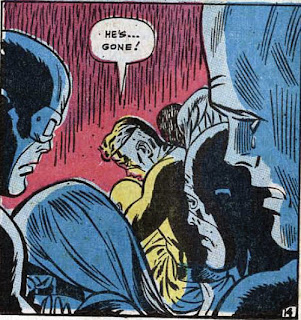 Grotesk also seemingly dies, though he'll turn up again briefly in Ms. Marvel's 1970s title for some reason, then vanish once more into obscurity.

Retcon or not, this issue sets up the first "the X-Men must get by without Professor X" period in the book's history. It won't be the last such period, but it's significant for being the first.

In the backup story, Jack O'Diamonds, the Living Diamond, is killed. Oddly enough, he's never been brought back, and not so oddly, he is rarely mentioned.

More cosmetically, the book's logo changes with this issue, shrinking and becoming "The X-Men featuring" followed by the name of the character(s) or event headlining that issue. This was another attempt to shake things up and increase sales on the stagnating title, but it won't last (so, presumably, it didn't help).

A Work in Progress
Professor X's strange behavior over the last two issues is explained as being a reaction to his incurable disease: he was pushing the X-Men harder so they'd be more prepared when he was gone, and he was holding them back to face Grotesk himself rather than risk their lives.

Marvel Girl is revealed to have been the one person Xavier told about his illness. The retcon will later establish that she's in on the whole Xavier/Changeling switcheroo as well, making her the only X-Man who knows that Changeling died and not Xavier. Nothing in the intervening issues suggests this, of course, as that plot point hadn't been written yet. 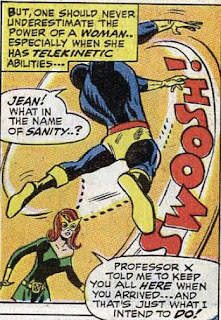 The narration explains that Xavier is fighting Grotesk with the use of his mechanical leg braces (I think this might be the last such mention of the devices). Of course, this narration is retroactively in error, as Changeling has no need for the braces. 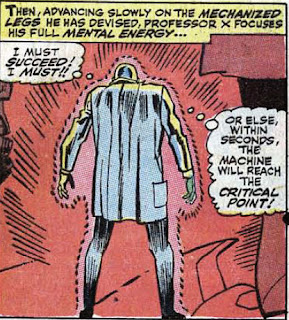 In the backup, Xavier, curiously, already has an X-Men costume and visor ready for Cyclops, despite only deciding to recruit him during the car ride back to the mansion.

Later stories will introduce Amelia Voight, a woman who is revealed to have been Xavier's lover in the time before he formed the X-Men. The issue which details their relationship places her in between panels of this issue's backup story (further contradicting Xavier's assertion in this issue that he's been something of a hermit for years now), in which she walks out on Xavier when he returns home with Cyclops (Amelia was against the idea of the X-Men, believing they would only make human-mutant relations worse, and she eventually joins up with Magneto).

Xavier telepathically picks a lock and "mentally analyzes" a machine to figure out how it works, once again showing that, like "magnetically", anything can be done if its preceded by the word "telepathically". 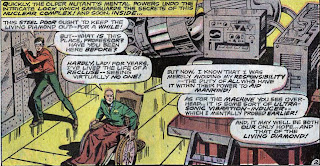 The Awesome and Terrible Power of Cyclops
Though believing in Xavier's dream of peaceful co-existence between humans and mutants, the newly-christened Cyclops still hopes to someday find a cure for his optic blast. 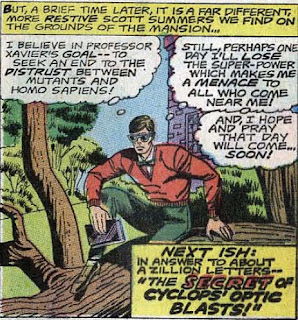 Ladies! Get rid of those unsightly blemishes and you'll be dancin' the Twist in no time! 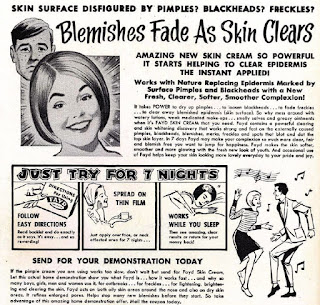 It's in the Mail
Capitalism at its finest! 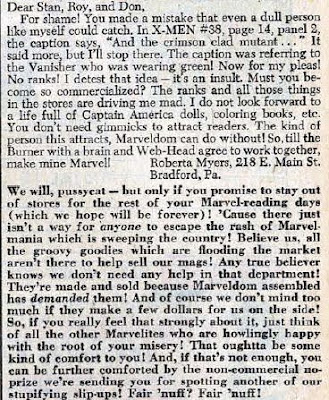 Roy Thomas on the death of Professor X*:
"Our original intention was that he would remain dead. I don't think we intended to bring him back. I have this feeling that killing Xavier was Stan's idea. Or, at the very least, something he was enthusiastic about. It certainly wasn't done without his knowledge. Neal Adams [the artist of X-Men when Professor X returns] and I have a little disagreement about the return of Xavier. I've always felt that I had the idea about the Changeling impersonating Professor X as a way to bring back Xavier if we ever wanted to do that, and that I even mentioned it to Neal and a few other people. Neal feels that he came up with the idea. At this stage, it doesn't make much difference. I just know that we weren't definitely planning on bringing Xavier back when we killed him. We were just playing it by ear."

Teebore's Take
What should be a significant, important issue is undercut by a variety of things, including: the ending of the story spoiled by both the previous issue's "next issue" blurb and this issues cover, the later retcon that makes this story about the death of the Changeling and not Professor X, and the fact that whether it's Professor X or Changeling, he's going out facing footnote-fodder Grotesk, yet another character that feels wildly out of place in an X-Men book. It isn't like Xavier is going down in a blaze of glory against Magneto or Juggernaut. So despite this story detailing the death of Professor X, arguably the most significant event yet to occur in the X-Men's short history, it still feels like a story in which other characters belong instead of the X-Men.

That said, the X-Men themselves didn't read the next issue blurb or know that Changeling replaced Xavier (well, except for Marvel Girl) so their reactions are authentic and readable (if not overwrought, in the style of the time) and at the end of the day, this issue does setup a new period for the X-Men, one in which for the first (but not the last) time they'll have to operate entirely on their own, without any guidance from Xavier. This issue may fall flat on its own merits, but it is setting up an interesting and unique direction for the book.