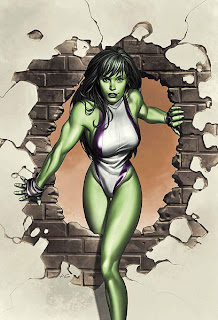 When She-Hulk was being released monthly, I picked up the first 6 issues and was drawn to the light-hearted humor, unique take, and, even though I really shouldn't admit it, sexy covers.

However, money concerns propelled me to stop buying monthly mags and the girlie greenie's tale was not mine to read. Thanks to MARVEL.com, I've finally finished Dan Slott's initial run on Bruce Banner's voluptuous cousin's comic series.

For those who don't know, Jennifer Walters was in dire need of a blood transfusion so her cousin, the alter ego of the Incredible Hulk, gave her some of his life juice. This, combined with her "anger", transformed her into the She-Hulk.

This particular comic series starts off with the She-Hulk spending a bit too much time turning the Avengers mansion into a den of libations, pulsating music, and throbbing libidos.

Captain America and Iron Man are the buzz kills probably because one used to be an alcoholic and the other apparently doesn't know what an IPOD is.

She-Hulk gets kicked out of the mansion and is hired by a prestige law firm who specializes in "super-human" law.

The cases she handles are somewhat ridiculous and her co-workers include a shape-shifting process server and the Mad Thinker's Awesome Android, affectionately called Awesome Andy.

She gets drunk with a c-rate supervillian, uses real life comic books as

The artwork is pleasing to the eye and easy to follow.

The whole series will make you smile and crave more. Luckily, Dan Slott returned to the title a year later and wrote another 21 issues which are all available on marvel.com as well. Soon, I shall be ocularly devouring them.

These 12 issues are collected in two volumes here and here. 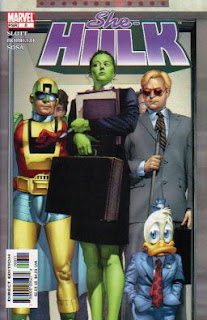 Email ThisBlogThis!Share to TwitterShare to FacebookShare to Pinterest
Labels: boots, comics, She-Hulk, the nerd within