Lost's final penultimate episode, "What They Died For" made an effort towards replacing the vagueness and obfuscation of the previous episode with clarity and straightforwardness. Lost's pre-finale episodes have a history of, if not downloading significant mythological answers, at least making clear the final plot points of the season. While the answers here weren't multitudinous, they were, at least, comparatively straightforward, and there's a clear(er) sense of where all the characters are at and what they hope to accomplish heading into the finale.

Jack has officially been anointed Jacob's successor, and is set to lead the charge against killing FLocke and saving all existence. FLocke, meanwhile, with a potential wild card in the back-to-scheming Ben at his side, has said "screw it" to the whole "kill Jacob's potential successor plan" and has decided to use Desmond to help him destroy the island once and for all, perverting the fail safe it was revealed Jacob intended Desmond to be.

The big remaining mystery, plot-wise, is the sideways universe. After seeing the momentum of its story stall a bit in "The Candidate", this episode has Desmond on the move once more, bringing together the disparate 815ers with a slick and conniving hand (and a little help from Hurley). Everything seems to be building to some kind of culmination at the museum's benefit concert. What that culmination is, remains shrouded in mystery. The island events, taken on their own, seem to be pointing to the "epilogue" theory of the sideways world, in which that universe is a result either of FLocke succeeding in destroying the island, or a result of a Desmond-initiated failsafe in which the characters are shunted away from FLocke. But Desmond taking an active role in the sideways world, working towards an unknown end, seems to suggest that plot will play a role more active than a mere epilogue in the show's final endgame.

Stuff Worth Mentioning
The episode began as a character's eye opened for the first time in a long time. 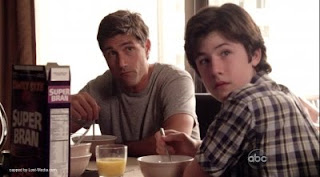 The scene of Jack stitching up Kate was reminiscent of (and a reverse of) their scene together in the pilot.

I liked how quiet the discussion between Sawyer and Jack regarding Sawyer role in the sub's destruction was. It's like Sawyer is filled with so much guilt and grief he can't even get angry at himself about it.

Richard buried Alex. That was nice of him.

Ben got a Sideways mirror gaze moment. Also, I love that the event that triggered Sideways Ben's memories of the other universe was getting repeatedly punched in the face.

Anna Lucia and Rousseau make their Sideways debuts. Rousseau was a pleasant surprise; I'd heard the producers tried and failed to bring the actress back this season. 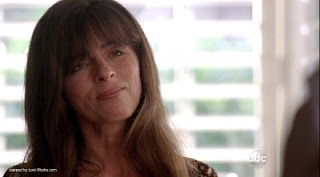 “He doesn’t get to save his daughter.” That...was pretty awesome. Still would have liked more from Widmore, and the whole Widmore/Ben conflict, though. 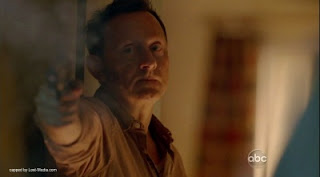 The line “don’t mistake coincidence for fate” was first said to Locke by Mr. Eko in season two's "What Kate Did", when he gave Locke the spliced out bit of orientation film.

I'm not sure what all the business about the ashes and Jacob being around until the fire went out was all about it. At this point, I'm just muttering a bit, then rolling with it.

When Jacob asked everyone to sit around the fire while he explained why they died, and it cut to commercial, I had no doubt in my mind that when we came back from commercial, the conversation would be over and we'd never find out what was said. I was seriously ready to chuck my remote at the TV. I'm glad I was wrong.

I'm hoping that Daniel and Eloise will be at the museum concert. Mainly because I like Daniel, and I'd like to know how the hell Eloise seems to know everything.

Interesting that Desmond was Jacob's fail safe. It suggests that Jacob's rules don't apply to Desmond, not just the rules of space/time. And it was, in part, the turning of the fail safe key that made Desmond special.

Questions Answered:
The Man in Black was transformed into Smokey; he did not release an entity which then took his form.

Widmore was working for Jacob since returning to the island. He was visited by Jacob and made to see the error of his ways. He brought Desmond back to the island specifically because of his immunity to the effects of electromagnetism, and because Jacob intended Desmond to be his ace in the hole, his fail safe.

Kate was crossed off the list when she became a mother (presumably, Claire got crossed off for the same reason). I also took that to mean candidates can get crossed off for a variety of reasons, there's no universal "deal breaker".

The names in the cave were Jacob's, not Smokey's, after all.

Jack is the candidate who replaces Jacob. 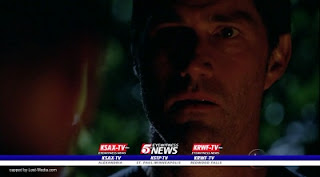 Smokey doesn't smoke his way through the jungle because walking makes him feel human.

Questions Asked:
What's the deal with Jack's red neck gash? That's the second time it's been pointed out. 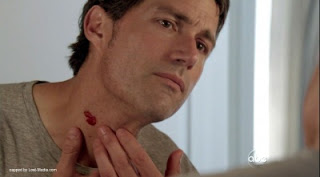 Why did Desmond want Jack to think his father's body has been found? Jack's already going to the museum concert; does Desmond not know that? I frankly figured the whole "Sideways Christian's body is missing" plot was done with, and was never meant to be anything more than an excuse to get Jack and Locke together in "LA X", but now it's been brought up again.

Why does it seem so much harder to get Sideways Locke to wake up and see the other universe?

So...was that the end of Richard?I really hope not, only because, instead of mourning him, we're wondering if he's dead or not (something "Heroes" did way too often, and Lost is already turning into "Heroes" far too much for my liking). 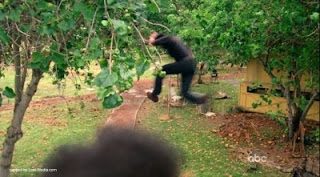 Why did Ben give Miles a radio?Is Miles just huffing it through the jungle right now?

Don't "the rules" mean Ben can't kill Widmore? Or does Ben just not give a flying toss about the rules anymore (that's my take on it, I guess)?

Why did Jacob appear to Hurley first as lil' Jacob, snatch the ashes, then show up as -- aw, hell, like we're ever going to get an answer to something like that....

Is Ben truly allied with Smokey now, or he is just playing him?

How will all this "Desmond is the fail safe/I'm going to use him to destroy the island" business going to play out? Who helped Desmond out of the well?

Next Week (aka Sunday): The End
We come to the end of Lost with "The End".

If you've been living in a cave on Mars with your fingers in your ears, the two and a half hour final episode will air at eight central on Sunday, preceded by a two hour retrospective/recap starting at six, and followed by a special "Aloha Lost" Jimmy Kimmiel Live episode, in which tons of the cast will appear and Darlton, in a pre-filmed segment, will make an appearance. 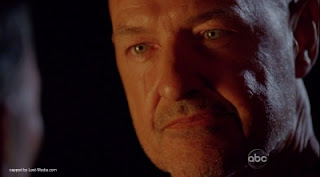