Or the One Where: The Simpson characters sing R&B and rap songs.

The Setup: Released at the height of the Simpsons initial merchandising boon, intending to cash in on the similar growing popularity of rap and R&B.

Notable Notes: Released in September of 1990, The Simpsons Sing the Blues reached #3 on the Billboard 200 chart (making it the highest charted Simpsons album; yes, there are more). In 1991 it was certified double platinum.

"Do the Bartman", the album's most well known song, was co-produced and co-written by Michael Jackson, a fan of the show, who would lend his voice to the third season's premiere episode. Because he was under contract with another record label, his involvement with the song is uncredited on the album.

Brad Bird, one of the show's resident directors at the time, directed the "Do the Bartman" music video. In later years Bird would join Pixar and direct "The Incredibles".

In addition to Jackson's involvement, other notable musicians who contributed to the album include B.B. King and DJ Jazzy Jeff.

Both "Do the Bartman" and "Deep, Deep, Trouble" had music videos, both of which are included on the Season Two DVD set. See them here and here. 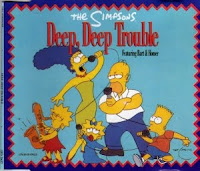 Favorite Lines:
Thanks to Dr. Bitz for the links to all the songs from the album, complete with crappy YouTube slideshows!

I Love to See You Smile

Look At All Those Idiots

Teebore's Take: "The Simpsons Sing the Blues" is an interesting piece of Simpsons history. There is something hilarious in picturing middle age white woman Nancy Cartwright in a recording studio, rapping out the words to "Do the Bartman." But at the time, the thought never occurred to me; I vividly remember listening to this tape (ah, cassettes) again and again when I was younger and eating it up (back then, I always liked the two Bart songs and "Look At All Those Idiots"; as I've gotten older, "Springfield Soul Stew", a riff on "Memphis Soul Stew" by King Curtis, has grown on me).

The two "singles" off the album, "Do the Bartman" and "Deep Deep Trouble" are interesting for the way they showcase different elements of Bart's character (at the time of the album's release, the show's most popular and representative character): the former casts Bart in the role of a cultural icon, inspiring a new dance craze while the later focuses on his whole as a perpetual troublemaker. In fact, each of the songs do a pretty good job of showcasing character, helping make the album stand out as something more than your average music tie-in. 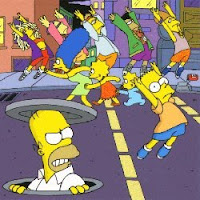