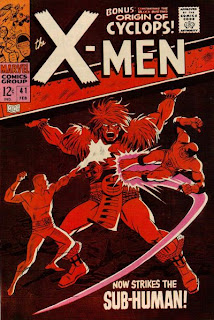 In a nutshell: The X-Men battle Grotesk, the Sub-Human.

Plot: Beast and Iceman are riding the subway with their dates when the train is attacked by a large sub-human. Slipping away under the cover of darkness, the two X-Men attack the creature, who takes the name Grotesk from Beast's description of him. They manage to chase Grotesk away. While fleeing, Grotesk recalls his origins, in which he was the prince of a warlike subterranean race before being mutated by radiation from atomic explosions that left him the sole survivor of his race and determined the destroy the surface world in vengeance.

Back at the X-Mansion, a tenser than usual Professor X is running the X-Men through training exercises before leaving to have a cryptic conversation with Marvel Girl. At the same time, a seismologist is demonstrating his Nuclear Oscillotron, which attracts the attention of Grotesk. He decides to use it to trigger earthquakes that will destroy the surface world. The X-Men investigate the subway tunnels and find Grotesk's lair. Cyclops and Beast push ahead while Angel and Iceman go back to get Marvel Girl and Professor X. But Marvel Girl refuses to help, just as Grotesk returns and confronts Cyclops and Beast....

Jack O'Diamonds and Professor X do battle via their mental powers, but Scott refuses to use his power against the professor. Jack smashes a beam, destroying the building and allowing he and Scott a change to escape. They arrive at the location of the Cyclotron, and Scott uses his optic beam to disarm a guard before Jack can kill him. Jack goes inside and power up the device. Professor X arrives on the scene as Scott is battling a group of guards, trying to knock them out so Jack won't kill them. Professor X telepathically puts the guards to sleep and introduces himself to Scott. Just then, Jack emerges from inside the building, smashing through the wall, his entire body transformed into Diamond.

Firsts and Other Notables
Grotesk, mutated last member of another race of subterraneans, makes his first appearance. He'll pop up a few more times, but his claim to fame is killing Professor X next issue. 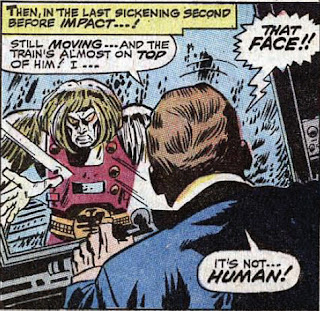 A Work in Progress
Except that by this point, thanks to a retcon established in issue #65 anytime we see Professor X it is actually Changeling in disguise. So technically, it's Changeling who'll be dying in the next issue.

Professor X is acting strangely throughout the issue and only Marvel Girl  "can guess at why"; the later retcon says this is because Professor X is really Changeling, and only Marvel Girl is in on the secret. The original, non-retconned explanation for his behavior will be explained in the next issue (and, cleverly, that explanation will be accounted for in the retcon). 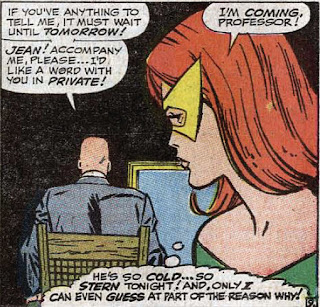 Professor X and Marvel Girl are also working on some experiments together. That plays in to the issue #65 retcon as well.

In the backup, Professor X insinuates that his telepathy somehow saved him from being crushed under concrete. We're entering a phase in these backups in which "telepathically" becomes synonymous with "magnetically", in that a character can do anything as long as one of those words precedes the action. 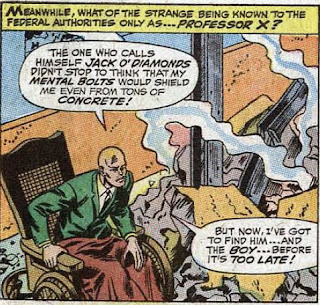 Ah, the Silver Age
A scientist has just completed his Nuclear Oscillotron, a device which causes earthquakes and will benefit mankind "in ways we cannot yet dream of!", somehow...

Jack O'Diamonds uses radiation to transform himself into a living diamond. That's pretty much the Silver Age in a nutshell. 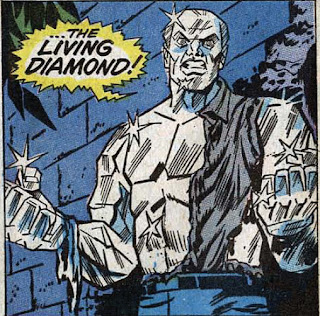 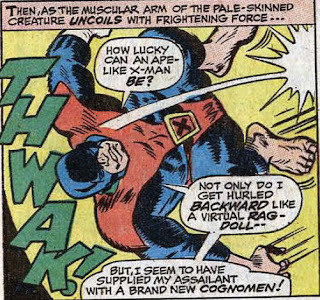 Young Love
Hank and Bobby have to run out on yet another date with Vera and Zelda. It's a wonder these two gals put up with it. 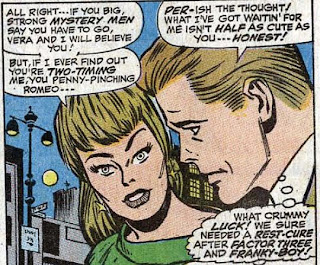 Scott, being Scott, worries that all the time Xavier is spending with Jean lately means Xavier is in love with her too. 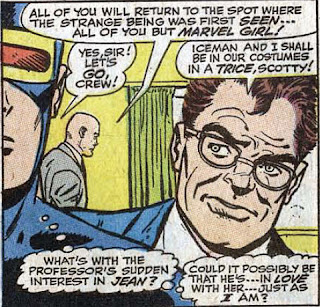 Teebore's Take
Yet another subterranean race shows up as part of a story that is noteworthy only for the death of Professor X. Since that happens in the next issue, this one is mostly (dull) setup. Again, we're not dealing with the stuff of legends in Grotesk, and there's definitely a feeling of padding, which is unusual for a story from the Silver Age.

This issue also kicks off an odd period for the X-Men. Never one of Marvel's strong sellers at this point, sales on the book were well below the standards of the time. Hence, starting with Xavier's death in the next issue, the book goes through a phase in which it throws ideas out there to see what sticks (and what drives up sales): the focus changes, the team breaks up, gets back together, crosses over with better selling titles, creators come and go. In that context, the death of Professor X can be seen for what it is: an attempt to change the (poorly selling) status quo and draw attention to the book, thereby driving up sales.
Newer Post Older Post Home
Posted by Austin Gorton at 5:00 PM