The first episode of the second half of Lost's final season brings Sun, largely dormant since learning Jin was alive last season, roaring back to life. Spurning Smokey, yelling at Richard, stripteasing Jin in the flash sideways; Sun hasn't had this much to do since her intriguing but seemingly forgotten alliance with Widmore. Her bonk-on-the-head-induced inability to speak English runs the risk of becoming gimmicky, but in a season that's all about going back to the beginning and is littered with callbacks to the show's first episodes, it's interesting to note that, for the time being, there is once again one Kwon who can speak English and another who can't.

This was the first flash sideways that was as much about plot as character, as the principle concern seemed to be establishing the events that led up to, and immediately followed, Sideways Sayid's discover of Jin in Keamy's fridge. As a result, despite the flash sideways device, in general, continuing to suffer from a "who cares?" malaise while their true meaning remains unknown, this one felt a little more urgent. The various Sideways threads seem to be coming together, with Sawyer's sideways story likely continuing in another Kate episode and Sideways Locke connected to several characters. Might Jin and Sun, in need of medical help, end up in Jack's hospital (after all, everyone else seems to...). Or might an injured, pregnant Sun be pulled within the orbit of Sideways Juliet?

While certainly light on island mythology, especially following on the heels of "Ab Aeterno", this episode at least felt like the plot moved along significantly. Team Jacob has a plan of action: blow up the plane so FLocke and company can't leave. Widmore is clearly not an ally of FLocke, and is plotting something using the electromagnetic pockets of energy on the island (another hint that perhaps the evil wine is representative not of Smokey but of something more scientific?) and the titular package, the someone stashed in that locked room, everyone's favorite Scot. While a more heroic and dignified return to the island would have been nice, the long overdue re-introduction of Desmond into the narrative shouldn't elicit many complaints.

Stuff Worth Mentioning
Widmore's crew uses knockout darts similar to the Others' at the end of season two.

FLocke tells Claire that once everyone is together and on the plan, whatever happens, happens. Aside from suggesting that perhaps once FLocke's agenda is complete Claire is free to do whatever to Kate, it's also a variation of Daniel's time-travel mantra that whatever happened, happened.

Jin and Sun's rooms were on the 8th floor of the hotel. Ben told Ilana 4 times he didn't do anything to Sun.

Not Tina Fey said that Widmore should have put a mercenary in charge instead of a geophysicist...is this the show attempting to reconcile "hire Keamey with orders to raze the island in pursuit of Ben" Widmore with a potentially "he's been a good guy all along!" Widmore? Cuz it's going to take more than Widmore realizing that maybe putting a psychotic mercenary in charge of the freighter mission was a mistake for me to buy a "good guy all along" reveal.

Heh. Mikhail. Nice to see him again. Jin shot him in the eye he covered with a patch on the island. 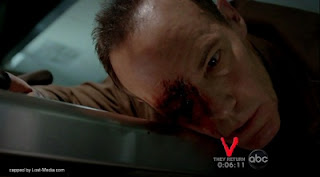 The watch Keamey was wearing in "Sundown" was the one Jin brought him from Paik.

Also, when Mikhail brings Sun into the restaurant, you can see Jin lying amongst the bodies, playing possum. 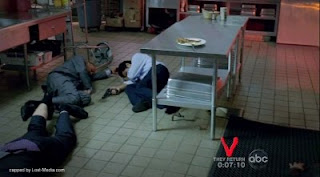 Keamey just won't stay dead, in any reality, will he?

Sun should probably use that paper Jack gave her a bit more conservatively...

So how annoying was the "V" countdown clock in the bottom corner of the screen?

Questions Answered
Are Sideways Jin and Sun married? No, but they are secretly involved. 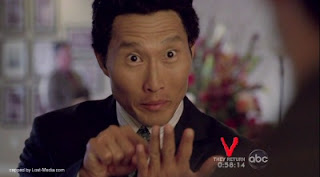 Why did Jin have the money in addition to the watch? It was the second half of a payment from Mr. Paik to Keamey for killing Jin.

How did Jin end up in the fridge where Sayid found him? He was brought there by Keamey, with the intent of killing him.

Are Widmore and FLocke secretly allies? Apparently not. 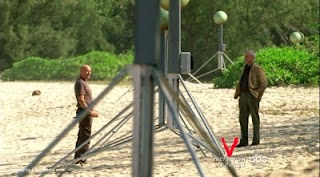 What's in the locked room on the sub? Desmond.

Can Widmore step foot on the island? Yes. At least, Hydra Island, which is more or less the main island (it travels with it...).

What was the deal with the Others' brainwashing room in season three? Apparently it was the remnant of a Dharma experiment dealing with subliminal messages that Ben merely appropriated in order to keep Doofy Karl from knocking up (and thus killing) his daughter. 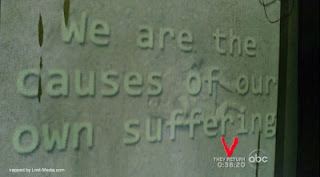 Questions Asked
FLocke said he needs six people to leave the island with him: which ones? There are five candidates left (Jack, Sawyer, Sayid, Hurley and a Kwon). FLocke needs Kate not because she's a candidate (she's been crossed off in the cave, but not the lighthouse dial), but because she can sway other candidates. So who's the sixth person? Does he mean Jin, because he won't get Sun without Jin? Or Frank, because he needs someone to pilot the plane? Or does Sayid's infection mean he's no longer a candidate, and FLocke needs the four remaining candidates plus TWO other people?

Why does FLocke think Sayid is better off not feeling anything? Is he manipulating Claire into taking out Kate once he's done with her?

Why can't Smokey smoke himself across the water?

Widmore's words to FLocke (that he was a myth/bedtime story/scary noises) suggest that, at least when Widmore was an Other, the Others didn't interact much with Smokey. So why not? Why didn't Smokey wipe out all the Others? Do the same rules that protect Jacob from him somehow apply to Jacob's followers?

How is Widmore planning to use the pockets of electromagnetic energy? How does Desmond fit into his plan? 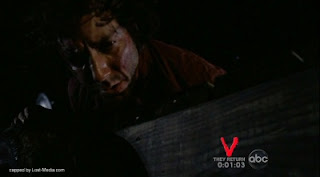 Widmore told Jin that if FLocke gets off the island, everything they know and live will cease to exist, which is more specific of a consequence than Jacob's "evil escapes into the world" comment in the last episode. Is FLocke some kind of anti-matter that, off the island, will have destructive consequences on regular matter?

How did Widmore get a hold of Desmond? Where's Penny and Charlie? How 'bout Eloise?

Is Sideways Sun pregnant with Jin's baby? Or is he still firing blanks without the island's help?

Next Week: Happily Ever After
Hopefully a Desmond episode. But either way, I have a feeling that title is going to be ironic... 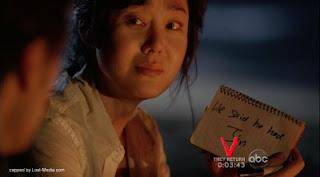