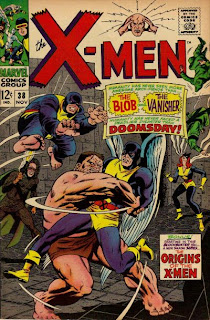 In a nutshell: The X-Men fight Factor Three in an attempt to stave off World War III.

Plot
(Main Story) The X-Men manage to escape from Factor Three's base by absconded in two Magno Disk, only moments before the entire facility explodes. The X-Men head back to the mansion to try and find a way to intercept Factor Three. Elsewhere, Mutant Master orders Changeling to contact the other members of Factor Three for an update. At the mansion, the Cerebro picks up that transmission and the X-Men split up in order to foil both plots.

Angel, Beast and Marvel Girl journey behind the Iron Curtain to stop a bomb from killing Communist military leaders and encounter Blob and Vanisher. Meanwhile, Cyclops and Iceman visit a US Army base, vainly trying to convince the officials that Factor Three is targeting their missiles. Unable to convince the army, Cyclops claims he must then destroy every missile before Factor Three can use them. Back in Eastern Europe, the other X-Men manage to defeat Blob and Vanisher, but Vanisher escapes just as the other mutants are overwhelmed by Communist forces. Captured, they are helpless to stop the pending explosion.

(Backup Story) A few years before forming the X-Men, Professor Xavier learns of an FBI investigation into the mutant phenomenon spreading around the country. This causes Xavier to break his self-imposed exile and take the plight of mutants into his own hands. He meets with the FBI agent assigned to the mutant case and his partner introduces himself while demonstrating his power. Professor X points out that mutants can be both good and bad, and that, as a fellow mutant, he's in a better position to approach them than the FBI. The three agree to work together.

Firsts and Other Notables
As suggested by the duel plot summaries, this issue features a five page backup story. This is the first entry in the ongoing backup series "The Origins of the X-Men". The series is intended to establish the origins of Cyclops, Iceman, Beast and Angel, what they did before they came to Xavier's school and how they attracted Professor X's attention (Marvel Girl doesn't get one ostensibly because she was seen arriving at the school in X-Men #1, which is a bit of a copout).

As we'll see, most of these backup origin stories are fairly episodic and pedestrian, and while they are largely forgotten and rarely reprinted (when these issues were reprinted during the titles early 70s hiatus, the backups were left out), the events depicted are still considered canon (the Marvel Handbooks, for example, still cite them).

FBI Agent Fred Duncan, whose first and last appearance was X-Men #2 (when it was established he had a working relationship with Xavier), appears in the backup, showing the genesis of his partnership with Professor X. He'll pop up again in the main story soon. 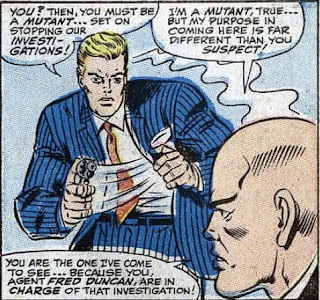 A Work in Progress
Changeling is starting to realize that Mutant Master is a bit mad, and that perhaps triggering a global nuclear war isn't in the best interests of mutants. 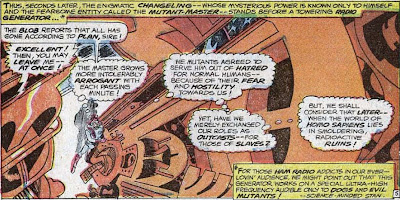 In the backup, Xavier says that he's been a recluse since his step-brother Cain (Juggernaut) was trapped in the cave-in in Korea. Putting aside several subsequent stories which contradict this, it was just plain wrong when this story was originally published, considering it had already been established in previous issues that Xavier traveled the world and fought Lucifer (losing the use of his legs in the process) in the time between leaving Juggernaut in Korea and founding the X-Men.

Ah, the Silver Age
The X-Men fight behind the Iron Curtain. It looks about like what you'd expect, Comrade. 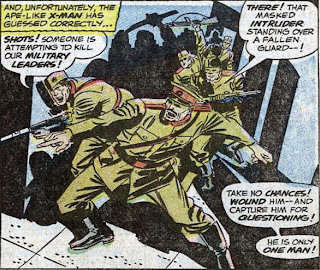 Last issue it was the Oblivio-Ray. This time, Changeling uses a Predicto-Scope to show a captive Professor X the post-apocalyptic world Factor Three is working to create (apparently, the world of 60s super villains and the world of Harry Potter have a lot in common).

Marvel's "sliding timeline" is already on display in the backup, as the events are said to take place in the "middle 1960s" (as opposed to the early 1960s, if time in the narrative was passing the same as in the real world).

Before databases filled with information there was row after row of file cabinets. 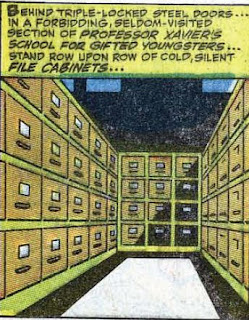 Human/Mutant Relations
In the backup story, news reports of Cyclops power triggers anti-mutant sentiment amongst the populace, triggering the FBI into launching an investigation into the mutant phenomena and Xavier into forging an alliance with them while starting to recruit his X-Men. 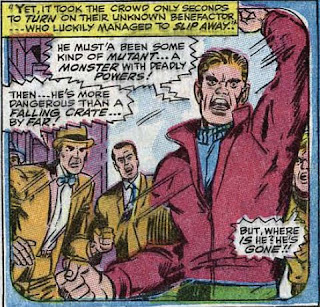 The Awesome and Terrible Power of Cyclops
In the backup, a young Cyclops loses control of his power, causing an air-conditioning unit to plummet towards a crowd below, but he manages to use his power to destroy it before anyone is hurt. The crowd still freaks out. 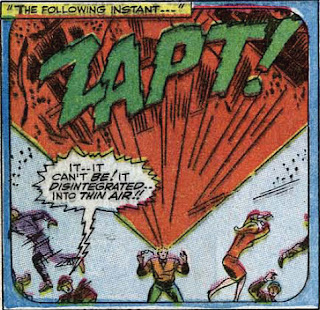 Teebore's TakeThe backup takes five pages away from the main story, making the obligatory "second chapter in a three part story where the heroes fight the villains but don't win yet" plot of the main story less tedious and more concise.  As for the backup, well, the whole concept is a bit silly, considering Stan Lee allegedly came up with the idea of mutants (super heroes that are just born with their powers) because he was tired of having to come up with original origins for every new character he introduced. Now, four years later, Roy Thomas begins the process of establishing "origins" for the X-Men.
Newer Post Older Post Home
Posted by Austin Gorton at 5:00 PM