The walls between worlds, it seems, are breaking down. Sideways Charlie saw glimpses of his island counterpart when nearing death, and now views his existence as boring and pointless, lacking as it does "consciousness-altering love" (apparently, Sideways Charlie missed the fact that his counterpart in the other reality is dead, but perhaps he feels that a life without that kind of love isn't worth living anyway). Charlie managed to help Desmond cross over and get a peak at the other reality, and when later bombarded with the EM energy from the MRI machine, Desmond's life with Penny in the other reality flashed before his eyes. Perhaps, in those moments seen in previous flash sideways, in which the characters stared into a mirror, the walls between realities were thin enough that they too saw a glimpse, however fleeting and brief, of their island selves.

Desmond's journey in this episode brought him back into proximity with Daniel (his half brother-in-law in the other reality), who, after a fleeting glimpse of Sideways Charlotte, also experienced a consciousness shift like Charlie and Desmond. Daniel's return was less frustrating than the usual "beloved character returns to wink at the audience in the flash sideways instead of, you know, answering the lingering questions about that character" schtick, partially because Daniel is a cool enough character that he's never annoying, partially because he seemed more like his old self than other returning Sideways doppelgangers, and it seems like, even if he doesn't appear again, he's still instrumental in the ultimate resolution of the sideways narrative, whatever it may be.

Stuff Worth Mentioning
I loved the little twitch in Desmond's lip as Widmore explained where he was. And Lady Teebore and I both cheered loudly when Desmond proceeded to try and beat the crap out of Widmore with the IV stand. 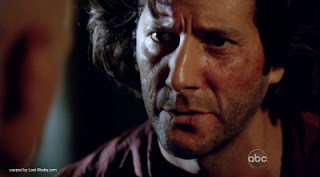 Like Eloise in "316", Widmore told Desmond the island wasn't done with him yet.

If Widmore abducted Desmond out of the hospital after Ben shot Desmond three days ago, then he must have had the sub and his team ready to go when he and Eloise talked outside the hospital in "The Incident". In fact, Widmore probably had whatever his plan is in mind when Desmond visited him earlier in season five asking for Eloise's address, as that conversation only took place however-long-it-took-to-sail-from-England-to-LA-plus-a-couple-days ago.

The EM Chamber, complete with its otherwise-innocuous desk chair in the middle, was vaguely reminiscent of Jacob's cabin. Though my first thought when seeing the exterior was "oh, so they've brought raptors onto the island, huh?" 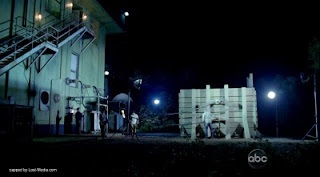 The rabbit intended to be used as the next test subject was named Angstrom, which is a unit of measurement pertaining to wavelengths of electromagnetic radiation, also the surname of the main character in John Updike's series of "Rabbit" novels.

Minkowski is the latest old face to make a reappearance. Now all the principal freighter characters, save Naomi and, oddly, Frank, have appeared in the flash sideways. 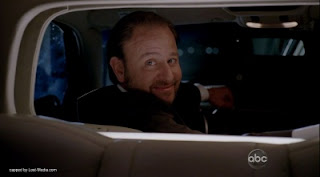 Sideways Widmore's office contains a painting of scales (like the one in the cavern), a model ship which resembles the Elizabeth, and, of course, MacCutcheon whiskey, which he freely offers to Sideways Desmond in a reversal of the scene which first introduced the expensive booze. 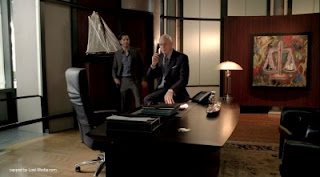 The spiel Desmond gives Charlie in the bar about having two choices, and always having a choice, sounded a lot like FLocke's schtick. Of course, neither choice presented to Charlie was life threatening, and he was clearly aware of the reprecussions of choosing each option.

Charlie dunked Desmond and his care into the same marina where Ben shot Desmond.

Apparently, some sort of large, white haired creature, possibly alien, resides on Sideways Eloise's head, presumably in some kind of symbiotic relationship with her.

Sideways Penny was doing the stadium run, just like Desmond and Jack when they first met. 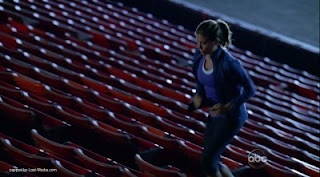 Questions Answered
We're closer than ever to getting the 411 on the whole flash sideways deal, but other than more theory fodder, just a few sideways details were laid out: Widmore and Hawking did get off the island in this reality, and Widmore apparently still hooked up with Penny's mom. Desmond WAS on the plane, for reals, and not just a figment of Jack's imagination. He's Widmore's right hand man.

Also, Sideways Charlie wasn't trying to kill himself in "LA X", but was swallowing his stash to hide it from the Marshall. He told Jack he was supposed to die because he was saw an  image of the Island Universe, of himself with Claire, and then was yanked away from it when Jack revived him.

Questions Asked
So what does Widmore want Desmond to do? What sacrifice is Desmond going to have to make? Why is Widmore showing all this to Jin? 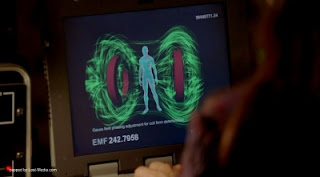 In "LA X" Desmond was wearing a wedding ring, but this episode makes it clear he's not married: plot point, or just a production error.

How does Sideways Eloise seem to know about Desmond/the nature of the flash sideways reality?

Who is Penny's mother?

What exactly happened at the end, there? It seems like Desmond's island consciousness slipped into his Sideways' consciousness while he was unconscious on the island. He didn't control that body, but he remembered it all when he woke up on the island. But then, when he woke up on the island, Sideways Desmond fainted. So in that moment, did Sideways Desmond shift into Island Desmond for a bit, observing but not controlling? Are both Desmonds now operating with full knowledge of their counterparts' lives?

Why was Desmond so calm after waking up, willing to work with Widmore and so nonchalant about going with Sayid? Did he get a glimpse of the future? Does he know that going with Sayid is what has to happen to make things right? 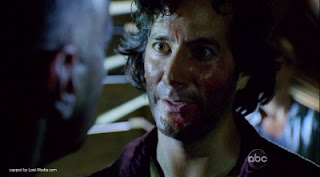 Next Week: Everybody Loves Hugo
Hurley, the last remaining candidate to take center stage, does so. Perhaps Libby will be back. If so, hopefully it'll be to do more than just wave at us from the flash sideways. 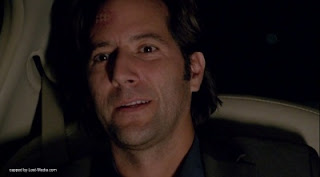