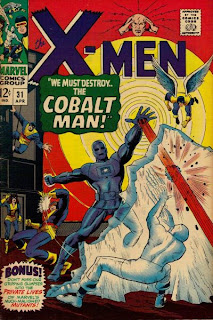 Plot: Following a training session in the Danger Room, Professor X announces that Angel is back to full strength. In light of the recent lack of Factor Three activity, Professor X gives the X-men a few days off. Beast and Iceman immediately depart for dates at the Coffee-A-Go-Go. Professor X asks Cyclops to return some books to Jean, and Angel agrees to drive him.

At Metro College, Ted's older brother Ralph, an industrialist, arrives for a visit. Ralph explains how he used to work for Tony Stark, but decided to branch out on his own. Ted, Ralph and Jean encounter Cyclops and Angel, and Ralph offers to show them all around his new laboratory. Angel bows out, deciding once and for all to give up on Jean, and goes instead to a dance club, where he bumps into his old childhood sweetheart.

At Ralph's lab, Ralph shows Ted his newest invention: a suit of armor, like Iron Man's, made of cobalt. He plans to work out the kinks in the design then give the blueprints to the government, something Stark refused to do with the Iron Man armor. Donning the suit to impress Ted, Ralph quickly goes mad and begins destroying the lab, knocking out Ted and drawing the attention of Cyclops and Marvel Girl. As the Cobalt Man, Ralph fights them off then heads towards Stark's lab, intent on destroying it. A revived Ted explains that if Ralph uses the suit too long, the build up of radiation will turn him into a cobalt bomb. Cyclops contacts Professor X who rouses the remaining X-Men from their vacation. At Stark's lab, the X-Men manage to subdue Ralph, who, free of the armor, realizes that Stark was right and that armor like Iron Man's is too powerful for most people to handle.

Firsts and Other Notables: After some fanfare, Ted's brother Ralph, self-proclaimed "boy industrialist", appears for the first time. He basically bonks his head trying to show up Ted at pole-vaulting then goes batshit insane the moment he puts on the Cobalt Man helmet, determined to destroy Iron Man and Stark Industries for refusing to listen to his ideas about militarizing their technology.

This is also the first appearance of Candy Southern (spelled Sothern in this issue), Angel's childhood sweetheart. The two are more or less together from this point forward, making this the end of the Scott/Jean/Warren love triangle (though Angel will remain protective and somewhat enamored of Jean for years to come). Candy pops up again from time to time in whatever book Angel is featured, including a fairly significant role in "Defenders" after he joins that team. Ultimately, she'll be killed by Cameron Hodge in the pages of "X-Factor", shortly after Angel's transformation into Archangel.

A Work in Progress: In running subplot news, Factor Three gets another name check, and Professor X is seen conducting experiments in front of the Mysterious Door. It's not clear if the experiments and the door are related. 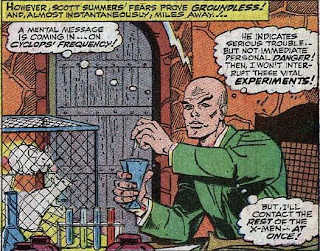 The X-Men now have wrist communicators that basically send a signal to Professor X, telling him to contact them telepathically. It's used in this issue by Cyclops so that Professor X can telepathically send the other X-Men to where he and Marvel Girl are. 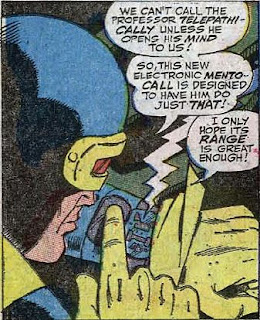 At his factory, Ralph mentions in passing a cobalt vehicle designed to burrow underground. It'll come up again. 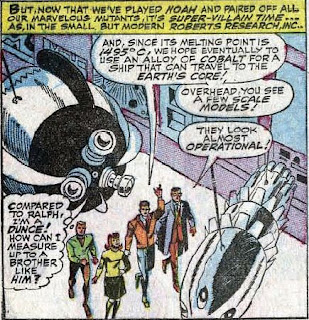 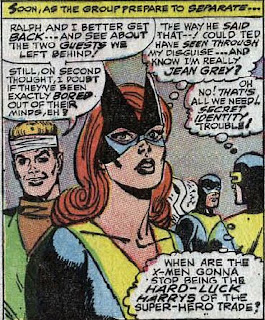 Ah, the Silver Age: Cobalt, not a big deal these days, was quite the bogeyman back in the sixties. After the atom bomb and the hydrogen bomb, there was the cobalt bomb, a nuclear weapon designed to render the area around its detonation uninhabitable, but one was never built. So the Cobalt Man is roughly analogous to a "Plutonium Man", which is why everyone kinda freaks out in the story, especially after Ralph becomes a walking cobalt bomb.

In case you're wondering where Iron Man is while Cobalt Man is attacking his lab, he's on a date. He can't be everywhere.

This panel pretty much says it all (click to embiggen): 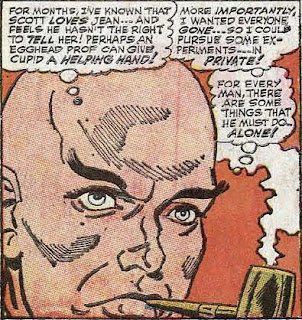 Later, both are dismayed when their alone time is interrupted by Ralph's destruction. 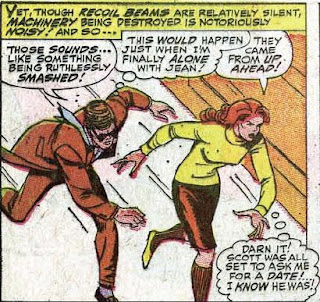 After his poetry reading, Bernard hits on Zelda. 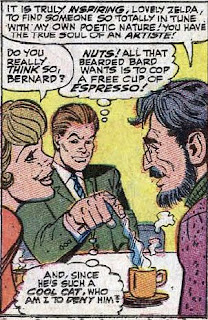 Once again, Hank and Bobby must run out on their dates. 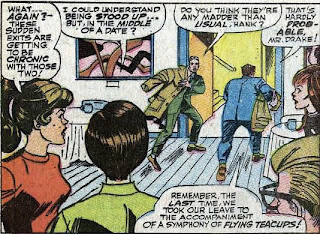 In the wake of giving up on Jean once and for all, Warren is reunited with his old childhood sweetheart, and old flames are immediately rekindled. 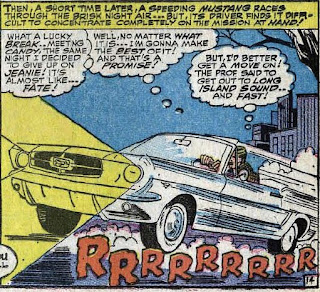 Human/Mutant Relations: Beast gets a couple of panels of characterization while getting ready for his date, in which he angst about being part of a feared and hated minority and how he uses his vocabulary as a refuge. 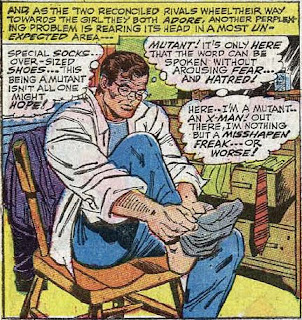 For Sale: This is the first ad for secondhand comics I've seen in one of these issues, from a time when the idea of comics as a collectible, something more than disposable entertainment, was still a novelty.

Teebore's Take: Thomas brings the Ted Roberts subplot to the fore by making his older brother into a villain that would be more at home in "Iron Man". In fact, once Ralph is introduced, the words "Iron Man" or "Tony Stark" appear at least once on almost every page. Again, Thomas is showing that there are other Marvel titles he'd much rather be writing (Thomas already dipped into the "Iron Man" well once before, when he filled Nefaria's team of villains with Iron Man castoffs; as Jason Powell, in the course of his excellent Chris Claremont retrospective on Geoff Klock's Remarkable blog recently noted, Claremont will turn to an Iron Man villain during the Acts of Vengeance crossover, making the Mandarin the foe behind Psylocke's transformation into a ninja*).

That said, this issue is a marked improvement over the last. Often, an X-Men comic is more enjoyable for it's quieter moments of character interactions than its action sequences, and this is true of this issue, with  significant time spent on Hank and Bobby in Greenwich Village, Warren meeting an old flame, and Scott and Jean (finally) drawing closer to admitting their feelings for each other. So while the Cobalt Man stuff is pretty rote, everything else manages to keep the issue fun.


*Yes, that parenthetical was a clumsy attempt at giving Jason Powell a shout out, as I've recently discovered his issue-by-issue analysis of Claremont's X-Men issuesand have been thoroughly enjoying them. Hopefully, when this series reaches those issues, I'll be able to bring something new to the table.
Newer Post Older Post Home
Posted by Austin Gorton at 5:00 PM