Ricky Gervais performed about as I expected. I particularly enjoyed that he had no shame in keeping a beer in the podium. His biggest "wow, he went there" moment of the night? "I like a drink as much as the next guy… unless the next guy is Mel Gibson. Ladies and gentlemen, Mel Gibson."

Two actors were nominated for the Best Supporting Actor in a TV show that I would have liked to see win (Neil Patrick Harris and Michael Emerson) and, of course, neither do, losing to John Lithgow for Dexter (another one of those shows I've never watched despite everyone saying how awesome it is). But at least Lithgow gave a nice speech. And Jeremy Piven didn't win.

Juliana Marguiles, accepting a Globe for Best Actress in a TV Drama, humorously zinged NBC when she thanked CBS for believing in the ten PM drama.

One of the writers of the song from Crazy Heart (which won Best Song) is named Ryan Bingham. That is also the name of George Clooney's character in Up in the Air. What a random coincidence.

Why does Drew Barrymore have a hedgehog on her shoulder? 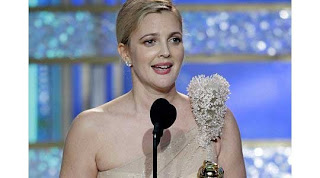 Holy crap, Glee beat 30 Rock. Mrs. Teebore and I finally starting watching 30 Rock this season after getting sick of watching it win award after award and not experiencing it ourselves. We enjoy it, but also enjoyed seeing Glee (both because we like Glee, and because it was nice to see something dethrone 30 Rock for a change). Ryan Murphy, accepting the award, dedicated it to ''anybody and everybody who got a wedgie in high school.''

The Hangover won the globe for Best Comedy or Musical Motion Picture. Could an Oscar nomination be in its future? Ordinarily, I wouldn't think so, but with ten spots up for grabs now and this win, it's looking like a possibility.

James Cameron's and Avatar's wins weren't very surprising, as the film is playing very well abroad and was a favorite to win the awards given out by the Hollywood Foreign Press. In terms of the Oscar Watch, Up in the Air received it's expected screenplay award at the Globes, while Hurt Locker received a critics award Friday night, further cementing its place as a Best Picture contender and widening the perceived Avatar/Up in the Air battle.
Newer Post Older Post Home
Posted by Austin Gorton at 8:00 AM