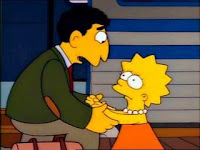 Or the One Where: Lisa crushes on her substitute teacher while Bart runs for class president.
The Setup: Lisa's teacher Mrs. Hoover must take a leave of absence after learning she has Lyme Disease.

A Work in Progress: The first overt antagonism between Homer and his brain (in which Homer speaks to his brain as though it is a separate entity) is in this episode.

Fun Facts: Dustin Hoffman provides the voice of Mr. Bergstrom, the titular substitute. However, he is credited as "Sam Etic" (a play on the word semitic) because Hoffman wasn't sure if he wanted to be identified with a cartoon, which shows how un-established the show was at this time, compared to these days, when celebs are tripping over each other to appear on "The Simpsons".

Mr. Bergstrom's appearance is based on Mike Reiss, a longtime writer and producer on the show.

This episode is considered a favorite of several Simpsons staffers.

Mr. Bergstrom: That's the problem with being middle-class. Anybody who really cares will abandon you for those who need it more. 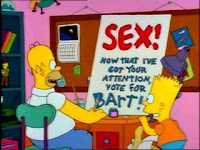 Teebore's Take: This is easily one of my favorite episodes of the season. It's funny and heartfelt, at times both devastating and uplifting. Like "Brush With Greatness" we're presented with two stories, Lisa's infatuation with her substitute teacher in the A plot and Bart running for class president in the B plot, but the two stories are much more intertwined than in the last episode. One of my favorite scenes is when Bart is stumping outside the school while Lisa and Mr. Bergstrom look on; for perhaps the first time on the show, we truly get a sense that Bart and Lisa are siblings and peers, separated only by a grade.

While the episode is called "Lisa's Substitute" it's really about Lisa's relationship with Homer, something that hasn't been touched on since season one's "Moaning Lisa" (and even then, it was simply to establish that Lisa had already grown beyond Homer's meager ability to parent her). Homer's portrayal throughout the episode manages to walk the fine line between well-meaning ignorance and outright meanness, featuring behavior that makes his later "jerk-ass" years all the worse by comparison.

Of course, this episode also parodies "The Graduate", with Ms. Krabappel standing in for Mrs. Robinson, so it has that going for it too. Ms. Krabappel actually has quite a few good moments in this one, including her glee at Martin's presidential victory over Bart.

It doesn't add anything new to the canon, but it is a brilliant piece of character work featuring a knockout guest turn from Dustin Hoffman. 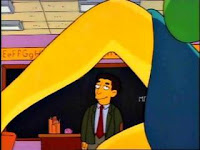