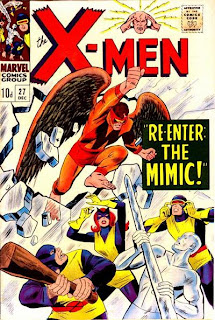 Plot: The issue begins 'In medias res' as a memory-restored Mimic is battling all the X-Men save the injured Angel. One by one, he overcomes them, standing victorious. The story then flashes back to the X-Men arriving home following their battle with Kukulclan. Professor X examines Angel and determines that the optic blast jolted his wings so badly that if he's not careful, he may lose the ability to fly. Much angst on the part of Angel and Cyclops ensures. Meanwhile, Jean cheers on Ted at a track meet. Afterward, Jean questions why Ted drives himself so hard, but is interrupted by a lab explosion. Cal Rankin stumbles out, the blast having restored his memories of his time as Mimic and his fight with the X-Men.

Elsewhere, the Fantastic Four villain Puppet Master molds a Professor Xavier puppet out of his radioactive clay and attempts to use to take control of the X-Men's leader, planning to use the X-Men to attack the Fantastic Four. Xavier's mind proves too powerful and he resists Pupper Master's control, so the villain decides to find another to make his puppet. The next day, the X-Men pick up Jean at school. Mimic confronts them, and convinces them to let him return to the mansion. Observing this, Puppet Master begins working on a Mimic puppet. Back at the school, Jean unveils the new costumes she's designed and Professor X announces that Cyclops  has resigned as deputy leader, to be succeeded by Mimic. Just then, Puppet Master takes controls of Mimic, and the fight which opened the issue breaks out.

With the X-Men defeated, Mimic flies off and with Mimic gone, Professor X revives the team and reveals he was using his power to make the X-Men subconsciously hold back, since he sensed Puppet Master's involvement and wanted him to think he succeeded so he would stop monitoring them. The X-Men take their helicopter and follow Puppet Master's radioactive brainwaves to his hideout. Angel, still injured, follows after them in his car. The X-Men sneak into Puppet Master's hideout and battle a large android guard. Defeating it, they face off against a still-controlled Mimic, who does his best to resist Puppet Master. Just then, Angel arrives and manages to wrest the doll out of Puppet Master's hands, ending his control of Mimic. Puppet Master escapes as the X-Men tend to Angel and Mimic worries that he'll never succeed on his own terms.

Firsts and Other Notables: Mimic regains his memory and forces his way onto the team, becoming the first new member to join the X-Men. 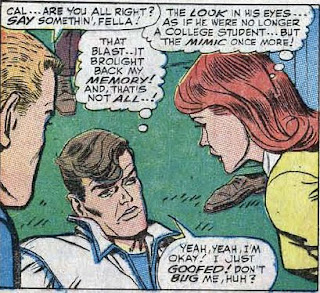 With Angel injured, Marvel Girl off at college, Cyclops tripping over his own angst, and a new mutant menace on the horizon, Professor X goes recruiting; Scarlet Witch, Quicksilver and Spider-Man all turn him down, forcing him to bring Mimic onto the team.

A Work in Progress: The X-Men get new costumes in this issue, though the only real difference is the addition of red belts (and some of the yellow is replaced with blue, while Jean gets a new mask that lets her hair out). The black-on-red X belt buckle, however, becomes the standard presentation of the X-Men logo, and these costumes become the de facto "school uniform" in the years to come, and are the original outfits worn by the New Mutants.

Cyclops, filled with angst over his accidental injury of Angel, resigns as deputy leader, and is replaced by Mimic.

When discussing Angel's injury, Professor X suggest for the first time that mutants generally heal faster than normal humans, something that doesn't often get brought up except when writers need a convenient excuse for an injured character to recover quickly.

Cerebro detects a vague yet powerful mutant menace, and Professor X begins to suspect there's a reason they've been alerted to so few new mutants lately. Both plot points are setting up the introduction of the villainous Factor Three in the next issue.

Ted briefly mentions his brother, setting up his appearance in a few issues.

After attaining Cyclops' power, Mimic dons his own pair of protective glasses. However, later stories will reveal that Cyclops' inability to control his power is a physical problem caused by brain damage he suffered as a child. As result, anyone copying his power, such as Mimic here (or Rogue, later) shouldn't have to wear protective glasses to control it, as they haven't suffered the same brain damage.

Ah, the Silver Age: We're treated to a horribly contrived  montage of Jean cheering on Ted at a track meet, then asking him why he drives himself so hard. He mentions living up to his brother, but his angst is interrupted by one of those campus lab explosions that were all the rage in the sixties. The entire scene is vintage Silver Age. 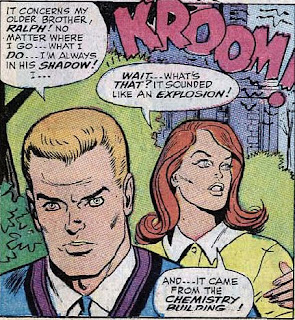 Simon and Garfunkle and Ringo Starr are name-dropped.

Jean designs the X-Men's new costumes because she's a girl.

Young Love: Iceman and Beast go out on a date with Zelda and Vera. Bobby, swinging ladies man that he is, offers to buy Zelda a hot dog and a cherry soda, then makes her pay for it. 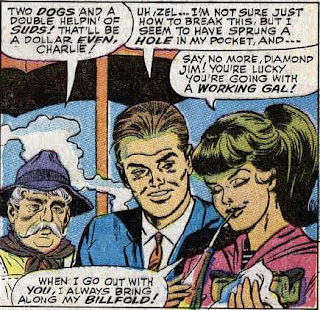 The Awesome and Terrible Power of Cyclops: Needless to say, Cyclops spends most of this issue beating himself up. 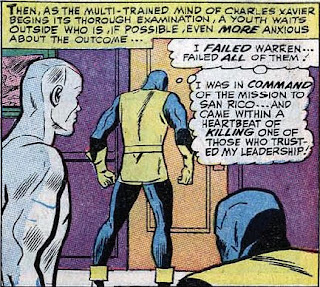 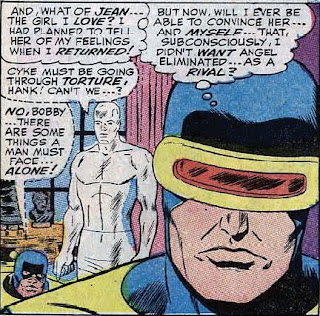 Teebore's Take: Now this is more like it. A ton of stuff happens in this issue, and while not all of it is quality (the Puppet Master serves no real purpose other than to fulfill the requirement of having a villain in every issue) it's at least different than the standard fare of the last several issues. The Silver Age mold is broken a bit, as several subplots are introduced, setting up future story lines. Plus, cameos from Quicksilver, Scarlet Witch and Spider-Man help the book feel more connected with the Marvel Universe on the whole, something it's been lacking since the X-Men tussled with the Avengers.

Mimic is still an ass, though slightly less so than in his last appearance, and Thomas makes some effort to humanize the character (Mimic gets in on the angst at the end, bemoaning the fact that he'll always be beholden to other people in order to succeed and can't do anything himself). That, and his appointment to the X-Men (as deputy leader, no less) suggests that Thomas was planning something more long term for Mimic than what eventually plays out. In the end, Mimic becoming the X-Men's first new member (and one who is not, technically, a mutant) will become nothing more than a curious footnote in X-Men history. But we'll get to that in due course.
Newer Post Older Post Home
Posted by Austin Gorton at 8:00 AM