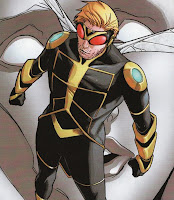 Powers and Abilities: Due to prolonged exposure to Pym Particles, Hank Pym can alter his mass and density in order to shrink to roughly the size of an ant or grow several stories tall. He is also one of the most intelligent men in the Marvel Universe and an accomplished scientist, particularly in the fields of robotics and bio-chemistry. 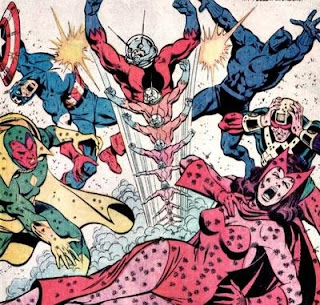 Weaknesses and Achilles’ Heels: Spousal abuse; a host of mental issues, including sometimes-crippling insecurity, exasperated by frequently using his power to increase his size; accidentally creating killer robots; occasional bouts of heart problems brought on by growing beyond his original size too far, too fast.

Gadgets and Accessories: Pym created a cybernetic helmet that enables him to communicate with ants and other higher-order insects. As Yellowjacket, Hank Pym wore a costume that enabled him to fly and generate electric "stings" from his gloves. When operating as simply "Dr. Pym", Hank carried a variety of miniaturized weapons, tools and accessories that he carried on his person and would enlarge via Pym Particles when needed. 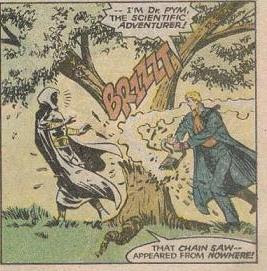 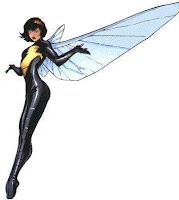 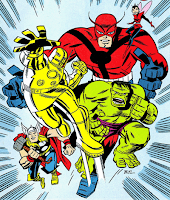 Movies and Appearances: As Ant-Man, Hank Pym was featured on the short lived, late 90s "Avengers: United They Stand" cartoon, and his counterpart from the Ultimate Universe appeared in the two animated direct-to-DVD Ultimate Avengers movies. 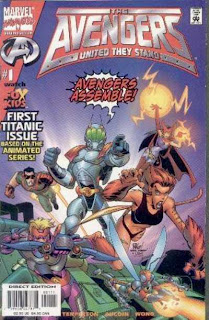 An Ant-Man movie, directed by Edgar Wright, is reportedly in the works.

One-Sentence Origin: After discovering sub-atomic particles that allowed him to change size, Hank Pym, whether as a costumed super-hero or a scientist, devoted his life to using his discoveries abilites to battle evil.

Memorable Moment: Love it or hate it, for better or worse, this is Hank Pym's most memorable moment: 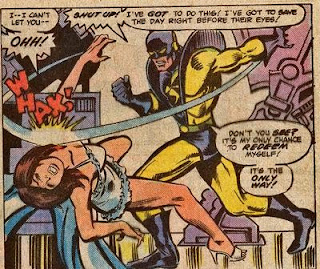 Fun Fact: Pym is at the center of fairly bizarre family, of sorts. He created the killer robot Ultron, who views Pym as his father. Ultron then created Vision, another android who rebelled against Ultron and joined the Avengers, making Vision Pym's grandson. Vision later married the mutant Scarlet Witch, bringing her into the Pym family. Eventually, Ultron also created a robotic companion for himself, appropriately named Jocasta, and programmed her with Wasp's brain patterns, meaning Ultron essentially made himself a wife modeled after his "mother". Jocasta, of course, also rebelled and eventually joined the Avengers as well, for a time.

Teebore’s Take: Oh, Hank Pym. He is known amongst comic fans for three things: having a ton of superhero identities, being kinda crazy, and slapping his wife. Unfortunately, the last of those is easily the one that gets thought of first. No other character is as defined by one action in one storyline than Hank Pym. In and amongst all the jokes that are made about Pym being a wife beater, it's important to remember he only hit his wife once. Which isn't meant to excuse the action, or belittle it. It's simply important to remember that the thing for which Pym is most well-known occurred only once, in the course of a long term story intended to bring Pym to his lowest point and have him accept responsibility for his mistakes, before slowly redeeming himself, and is not a recurring character trait. 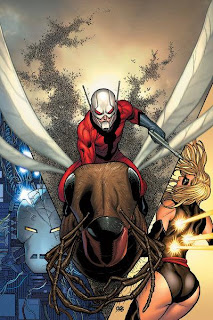 While his wife-slapping is limited to one instance in one storyline, his other defining traits, multiple identities and mental problems, have been a part of Pym's character almost from the beginning, and continue to define the character. Pym's motivation for changing from Ant-Man to Giant-Man shortly after joining the Avengers way back in the early sixties was triggered by the insecurity he felt working alongside such relative powerhouses as Iron Man and Thor. Later, following his creation of the murderous Ultron, Pym's adoption of the Yellowjacket identity for the first time was brought about by a schizophrenic break. All throughout his long tenure, Pym has ricocheted from one identity to another, and his insecurity and other mental problems are often cited as the reason for the constant changes. 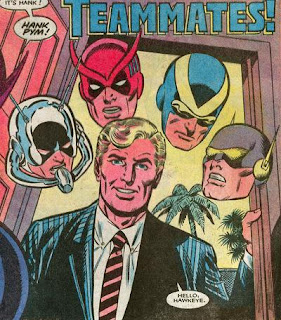 Recently, he settled on the Yellowjacket identity, and rose to prominence during the "Civil War" storyline as one the main leaders of Iron Man's pro-Super Hero Registration forces. In the aftermath of that story, Pym became the head of the 50 State Initiative program, helping to train newly-registered heroes and place them throughout the country. However, it was revealed during the "Secret Invasion" storyline that the Pym that's appeared since shortly before "Civil War" was a shapeshifting Skrull imposter (which probably accounts for his relative mental stability during that period). Following the death of Wasp at the end of "Secret Invasion", the real Hank Pym returned, adopting the identity of his deceased ex-wife while becoming the leader of an Avengers team. 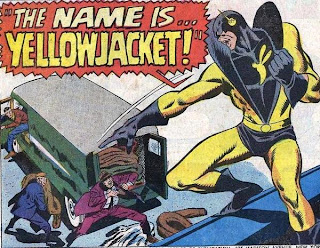 Maybe it's just pity for poor Hank, but I've always enjoyed reading stories featuring him. As much as the Avengers aren't quite the same when Captain America isn't around, for me, Hank Pym is just as integral a part of the Avengers' dynamic. While being known as the crazy wife beater means Hank isn't usually thought of as the most heroic or noble of characters, it must be said that his characterization has been, for good or bad, remarkable consistent for over forty years, and there's definitely something appealing about that. 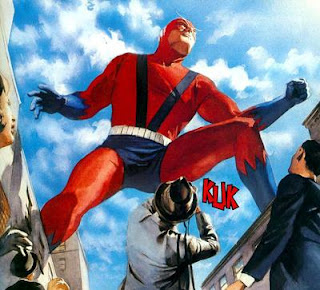