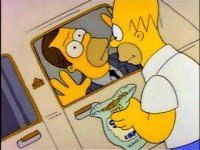 Or the One Where: Homer meets his half brother Herb.

The Setup: After a heart attack forces Grampa to accept his own mortality, he tells Homer about Homer's long lost half brother.

Homer's mother, Mona, though unnamed at this time, also appears for the first time in a flashback.

Grampa watches another McBain movie before having his heart attack.

The director of the orphanage from which Herb was adopted bears a striking resemblance to Dr. Hibbert and says that he too has a long lost half brother, making him the first of Dr. Hibbert's two long lost brothers.

Fun Fact: Some fans felt the ending of this episode was too sad, resulting in the producers creating the season three sequel, "Brother, Can You Spare Two Dimes", which restored Herb's fortune and reconciled him with Homer.

Herb: So, Marge, a little about yourself.
Marge: Well, I met Homer in high school. We got married and had three beautiful children.
Herb: Wow. We have so much catching up to do.
Marge: Mm. Actually, I just told you pretty much everything.

Homer: You know that little ball you put on the aerial so you can find your car in a parking lot? That should be on EVERY car! 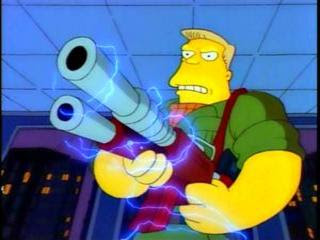 Teebore's Take: Introducing a heretofore unseen family member (and casting a big name star to play that character) is a hoary sitcom cliche as old as the form itself; thankfully this episode manages to sidestep the pratfalls of that particular cliche, creating some heartfelt and hilarious moments in the process. Homer and Herb's glee at the discovery of their relationship is genuine and feels real, which makes the ending all the more tragic. The obvious similarities and differences between the two men are played for laughs but aren't relied on as the only source of humor in the episode. And of course, we all know Homer is going to blow his design; the humor comes in seeing exactly how he manages it.

Also, this is the episode that taught nine-year-old me the technical definition of "bastard", back when it first aired.

Ultimately, this one is a classic for two significant reasons: the introduction of Homer's half-brother Herb, and the absolute monstrosity that is the car Homer designs (though I've always thought it was kind of cool). 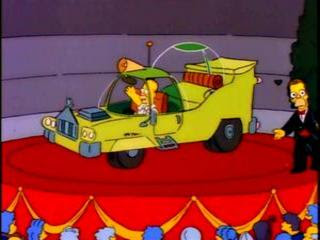