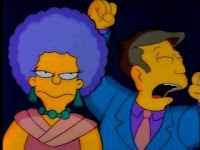 Or the One Where: Principal Skinner dates Marge's sister Patty.

The Setup: After going out with Homer to an all you can eat barbeque restaurant, Marge calls in a favor and asks Homer to find a man for her lonely sister.

A Work In Progress: This episode marks the first appearance of Groundskeeper Willie, as well as Hans Moleman and the Squeaky Voiced Teen. Willie is voiced by Dan Castellaneta, and when he first recorded the character's lines in this episode, he wasn't sure what kind of voice to use. As a result, Willie was both Spanish and Swedish before becoming an angry Scot.

This is also the first Skinner-centric episode.

Fun Fact: Due to the romantic elements of this episode, it was held back after production to air on Valentines Day in 1991.

Skinner: Bart, I'm flabbergasted. Surely you knew that when you were writing your own name in forty-foot-high letters on the field, that you would be caught.
Bart: Maybe it was one of the other Barts, sir.
Skinner: There are no other Barts!

Selma: It's time to give away my love like so much cheap wine.
Homer: Take it to the hoop, Selma! 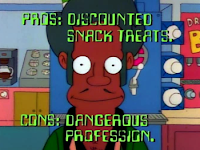 Teebore's Take: One of the first episodes to show that "The Simpsons" can do a romantic story without becoming too sappy or too unfunny, and that they can do stories that barely involve the main family at all. Also notable for fleshing out Skinner's character a bit (though his insane relationship with his mother isn't established yet) as well as Patty and Selma who, until this point, were little more than the stereotypical in-laws that aggravated Homer. Finally, the episode is chock full of movie references, including everything from "Terminator" to "Vertigo" to "Gone with the Wind".

Another personal favorite that fleshes out several important supporting characters while introducing a few more, all the while telling a romantic story that is both sweet and funny. 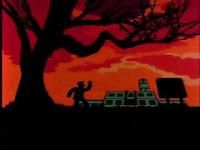