Ripped From The Headlines!

I know many of you have probably seen this story. Now, some people are discussing what this means about our youth and "YouTube" culture and how human decency is going out the window. But I'm going to ask the question that really matters. How will this story be used in a "ripped from the headlines" episode of Law and Order? 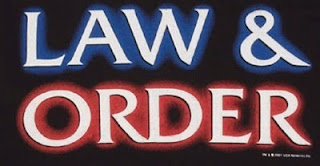 I figure there are four ways this story could show up:

1. The Slight Nod: This would be an episode that references the story but doesn't focus on it. The episode would start out with a montage of no-good punk kids hitting unsuspecting bikers and hikers while filming it on a personal camera. Then they hit someone from behind only to discover the person is bleeding profusely from stab wounds! That victim, of course, soon dies.

Cut to a scene of the punk kids talking to the detectives. The detectives berate the kids for their YouTube antics, make a one-line-commentary on the youth of today, and then head off to find the killer.

2. The Police-centric Episode: This is taking the story and kicking it up a notch. Instead of hooligans randomly assaulting people and putting it online, a seriously deranged individual is actually killing people and posting the videos online. Unfortunately, the killer wears a mask and his video posts are untraceable. The detectives must use their investigative skills to figure out the killer's identity and, of course, they bring in a computer expert to track the video feed. Naturally, a lot of commentary on the digital age will be made during this episode.

3. The Court-centric Episode: A body is found in central park. The detectives investigate and to their shock they find it was done by no-good punk kids who were filming themselves assaulting people. The person's death was an accident. They pushed the guy over and his head cracked open on the pavement. Now the dilemma occurs. These are minors who didn't intentionally kill someone, but the public is demanding they be tried as adults! The moral quandaries are endless!

4. Putting The Whole System On Trial: In this case, the "whole system" is YouTube...well...a reasonable non-copyrighted fictional facsimile of YouTube, like "YouVideo" or "VideoTube".

Basically, the episode starts like number three. Kids are goofing around by assaulting people and posting it and accidentally push someone too hard and the victim ends up dying. The twist? They've been doing this for over a year!

You see, these jokers have posted these kinds of antics before and their past videos have been among the most viewed on the reasonable non-copyrighted fictional facsimile of YouTube. So the website knew about the kids and their assaults and didn't even so much as take the videos down.

Who is really responsible for the death? The kids who committed the assault or the giant company that tacitly endorsed it? Sounds like something the courts will need to decide!

I have no idea which direction Law and Order will take this story, but I'm excited to find out!
Newer Post Older Post Home
Posted by Dr. Bitz at 4:12 PM

Email ThisBlogThis!Share to TwitterShare to FacebookShare to Pinterest
Labels: Law and Order, No good punk kids