Because YOU demanded it, here's five guys that have the best chance of convincing me to play for the other team. 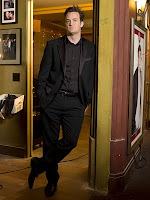 Mathew Perry (Friends, Studio 60, The Whole Nine Yards, various crappy RomComs): What can I say? I like to laugh. Chandler was always my favorite character on Friends, and the unfairly-criticized, but-not-without-its-flaws Studio 60 showed us Mathew’s more serious side without leaving the humor entirely behind. Plus, Mrs. Teebore likes him, so we could share.

George Clooney (Ocean’s 11, Michael Clayton, Good Night and Good Luck): ~boots likes Brad Pitt so I’ll give Brad’s buddy George his due here. There’s just something easy going and affable about Clooney that makes him likeable and suggests he’s not just an arrogant Hollywood pretty boy, so he’d treat me right, even though he’s way better than me at everything. Clooney also reminds me of an actor straight out of classic Hollywood, and I like that.

Shia LaBouf (Disturbia, Transformers, Indy IV): Shia strikes me as the kind of guy that in high school was into nerdy things, so he’d talk to the geeks, but was still hip enough to hang with the cool kids. So he’d probably break my heart, but still, like a woman and “bad boy”, I just can’t resist; last summer’s Transformers (in which he was almost as much fun to watch as the giant transforming robots, which is good, considering the producers insisted on not exclusively featuring the giant, transforming robots for some reason) did too good a job of sparking the flames of my man-crush on Shia. 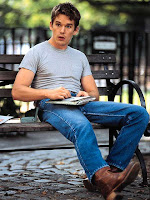 Ethan Hawke (White Fang, Great Expectations, Gattaca, numerous angsty early 90s movies): Ethan Hawke is handsome in that awkward, oddball way that makes you think he appreciates love, so he wouldn’t leave me when someone hotter came along. Starring in a version of Great Expectations that cut out all the boring Dickens crap and made it about unrequited love also helps his appeal.

Christian Bale (Newsies, American Psycho, Batman): As anyone who’s heard me use the phrase “it’ll be a Christian Bale-orama” to enthusiastically describe an upcoming movie, it should come as no surprise that he tops this list. Whether hawking papes or punching face, I wouldn’t mind spending some time with him in Santa Fe…
Newer Post Older Post Home
Posted by Austin Gorton at 1:29 PM

Email ThisBlogThis!Share to TwitterShare to FacebookShare to Pinterest
Labels: I swear I'm not gay, Teebore's Man-crushes