Nicknames and Aliases: The Emerald Archer

Powers and Abilities: Green Arrow is a phenomenal archer, considered one of the best in the DC Universe, as well as an accomplished hand-to-hand combatant, swordsman and detective.

Gadgets and Accessories: Everything Batman has, but with the word “arrow” replacing the word “Bat” as well as an assortment of bows and arrows, including various “trick” arrows, like gas arrows, boomerang arrows, glue arrows and the infamous boxing glove arrow. 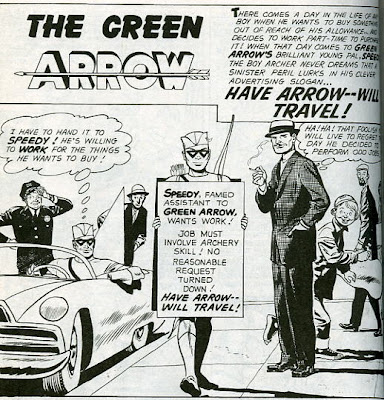 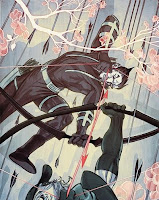 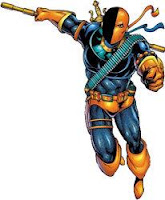 Movies and Appearances: Green Arrow popped up in a random episode of Super Friends back in the day and appeared fairly regularly in the more recent Justice League Unlimited cartoon. He has also been a recurring character and heartthrob on the more recent seasons of Smallville, cast as a Bruce Wayne-esque playboy vigilante with a grudge against Lex Luthor and romantic inclinations towards Lois Lane. Green Arrow will also reportedly star in an upcoming movie in which he is framed and must escape from a prison for super-villains.

One-Sentence Origin: After being stranded on a deserted island, rich playboy Oliver Queen honed his natural archery skills to survive and after returning to Star City, used his newfound abilities and a healthy dose of liberal rhetoric to fight crime as Green Arrow. 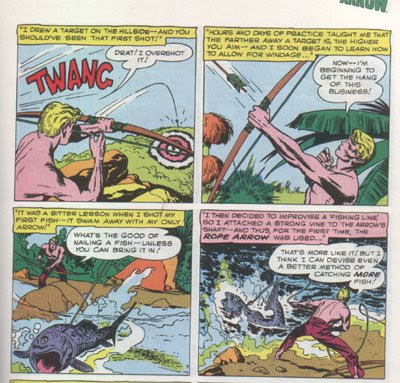 Memorable Moment: Green Arrow vol. 2 #101: Green Arrow is aboard a plane above Metropolis rigged with a bomb that will destroy the city. He manages to delay the detonation, but is forced to remain holding the dead man’s switch as the plane crashes, sacrificing his life to save the city (don’t worry, he gets better). 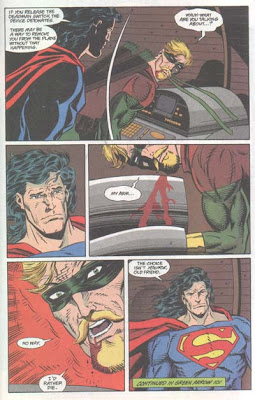 Fun Fact: Back when he was “Batman…but with archery!” Green Arrow even had a Joker-esque, clown- themed archenemy called Bulls-Eye. To this day, Green Arrow has a surprisingly crappy Rogues Gallery. 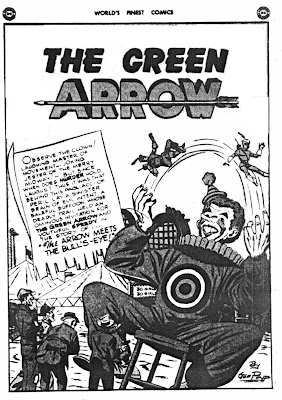 Teebore’s Take: For all intents and purposes, there have been two very different Green Arrows in the history of DC comics. The first was basically a Batman ripoff, with all the bat-themed gimmicks replaced with arrow-themed ones, complete with a sidekick, an Arrowcave, and an Arrowmobile. He and Speedy starred in the backup strips of the more popular hero’s comics, which enabled him, like Aquaman, to stay in publication alongside the “big three” when most of the other superhero books died out in the wake of “Seduction of the Innocent.” After the rebirth of the genre in the Silver Age, Ollie joined the Justice League and began his decade’s long romance with Black Canary.

But in the late 60s and into the 70s, as new writers, like Denny O’Neil, broke into comics determined to bring some social-consciousness and realism to the genre, Green Arrow was given a new look (his now standard Robin Hood-inspired look and goatee) and found himself recast as a fierce liberal firebrand. He lost his fortune and became a ground-level crusader for the working class, a fairly unique innovation at DC for the time. 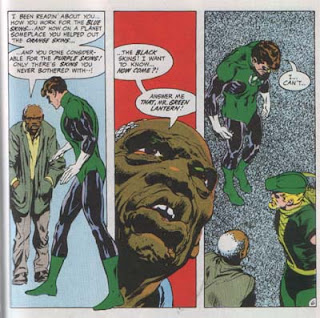 Later, Ollie was paired with the more conservative “space cop” Green Lantern in O’Neil’s “hard traveling heroes” stories, illustrated by the innovative Silver Age artist Neal Adams. The two heroes traveled the country and along the way encountered and reflected on various social issues of the times (including the infamous and much-loved-amongst-the- Gentlemen “my ward is …a junkie!” story). O’Neil’s writing in these issues comes across nowadays as ham-fisted and fairly simplistic (for example, the famous “what have you done for the ‘black skins’” diatribe against Green Lantern overlooks the fact that Green Lantern saves the lives of all black men, along with everyone else, every time he saves the planet from one menace or another), but it was one of the first times real world issues and socially conscious stories found their way into superhero comics, and the run remains hugely influential on the medium as a whole. And as a result, Green Arrow found himself locked into this new characterization, one far more complex and well developed than his old “Batman-lite” persona. 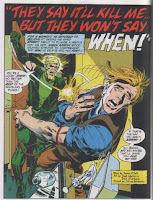 Green Arrow was now often shown arguing with his more conservative Justice League teammate Hawkman (another space cop) and chiding the Justice League for operating out of a satellite orbiting Earth, far removed from the people they were supposed to be helping. This political bent has become an integral part of his character to this day, such as when he was recently elected mayor of Star City in order to take a more direct role in cleaning up his city. Green Arrow remains one of the few superheroes whose political views are a firmly established element of his characterization. 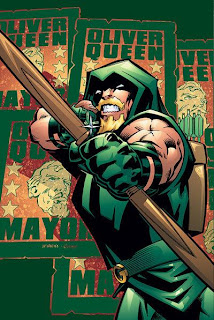 The other interesting thing about Green Arrow is the fact that his schtick (he shoots arrows at criminals) doesn’t really fit into the more traditionally family-friendly world of superhero comics, in which, most often, the heroes capture the criminals rather than kill them. When first introduced this wasn’t much of a problem, as Green Arrow’s gimmicky arrows like the boxing glove arrow averted the issue and was more than acceptable to an audience largely composed of children. But as the audience got older and Green Arrow specifically and superhero comics in general began to take themselves more seriously, the notion of something like a “soot arrow” became entirely too ludicrous, even for a world where a millionaire dresses up like a bat to fight crime. 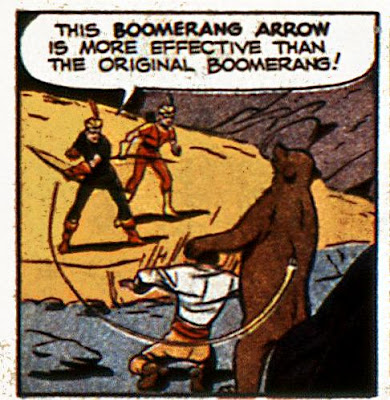 In the 80s, when the social relevance and realism started in the 70s really began to take hold in superhero comics, and countless heroes were “darkened” or cast in more “realistic” stories, Mike Grell started a new Green Arrow series which did its best to remove Ollie from the traditional superhero trappings, giving him a toned-down variation on his traditional costume, moving him to a real city (Seattle, as opposed to the fictional Star City) and refusing to sugarcoat the fact that Green Arrow was fighting criminals with pointy projectiles fired with unerring accuracy. 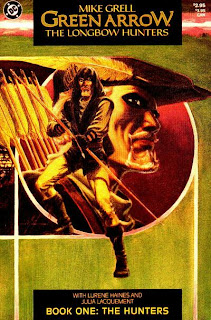 But it wasn’t long after Grell left the book that Green Arrow was gradually reabsorbed into the DC Universe-proper, fighting alongside the Justice League again, leaving the readers with the assumption that while he was still using “real” arrows as opposed to the gimmicky trick ones, he was using his skill to fire those arrows in such a way as to only disable or wound criminals rather than kill them. 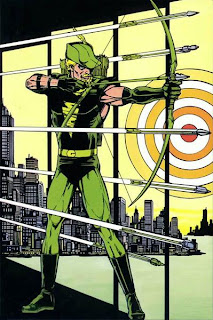