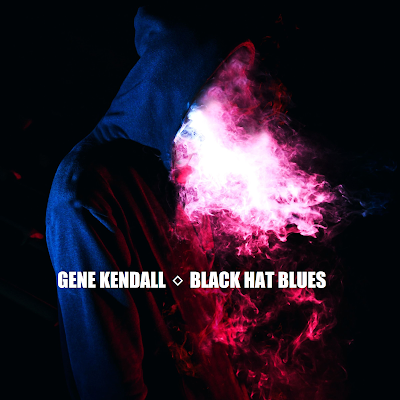 Gene Kendall here, promoting the audio release of my book Black Hat Blues as if I were born with no shame. This is my first excursion into the world of audio, and to be honest, it’s an avenue I never thought I’d explore.
But, I received an email out of the blue, raising the possibility of creating an audiobook through Audible’s ACX site. Investigating, I became intrigued at the prospect, but a little nervous about how this would play out.


Let’s be clear—I wrote a book about a cartoon supervillain with a ludicrous vocabulary entering our world, ranting over perceived slights and tossing off catty little asides as if he were a spurned Bachelor contestant. Making this more daunting is a later shift in the novel—the portion narrated by the villain’s heroic nemesis. I’d have to find someone as believable as Lex Luthor as he is as Superman.
This hypothetical voiceover actor would have to possess the gravitas of a Julliard-trained thespian and the comedic talent of a New York stand-up. And, complicating this even further, was the heart of the novel, woven between this nonsense—the story of a fractured family finally becoming whole.
My narrator would have to do accents, sound convincingly brilliant and sadistic, sell some jokes, pronounce a few words you only find in a thesaurus these days, convey a sincere family drama...and sing a few bars of ’80s karaoke.
Amazingly, I found this guy. Actually, in a way, he found me. He was the first to respond to the open audition. I couldn’t believe I found someone that good the first day the audition was up. But voiceover talent Brian L. Knutson really is that good. Heck, I checked out a dozen or so auditions in the ensuing days. Some fine talent I’d like to work with someday…but none sounded as “right” as Brian.
(Truthfully, I’d forgotten the bit with the ’80s songs when I submitted the book. Reviewing the files, getting to that section, realizing it was coming…I got a bit nervous. If Brian had balked at this nonsense, I wouldn’t have blamed him. But he turned out the best so-abridged-it-was-legally-okay-to-use rendition of “Don’t You Forget about Me” you’ll hear this decade.)
Brian’s performance fits the material perfectly. His Mr. Scratch, in various moments, has a quality reminiscent of brilliant voices like Kelsey Grammer and Barry Stigler. And when Scratch drops his façade of playful condescension—when he’s truly mad—I hear notes of Mark Hamill’s darkest Joker performances. There’s another bit where the narrative shifts to describe a cheesy ‘80s action cartoon—and Brian effortlessly drops into a bombastic hero voice worthy of Space Ghost’s Gary Owens!
I don’t know if Brian was ready to kill me by the novel’s end (he says he had fun…) but his work here is brilliant. Seriously, even if I weren’t in shill mode, I’d tell you that you owe it to yourself to listen to his performance.
And, if you’ve never tried Audible before…we’re both in luck. It’s extremely user-friendly, there’s a free trial period, and if my book is the first you download at this link, I could receive an “Audible bounty” of fifty bucks! Sounds like a fine way to enjoy Brian’s incredible performance and thank me for all of those Mutant X issues I reviewed.
If you are an Audible subscriber, the standard link is here. And I have a few free promo codes to send out. Just contact me and I'll probably be able to help you out.
Seriously, I can’t describe how excited I am for this. If you do take us up on this offer, please let me know what you think. And, as always, thank you for being so supportive (and indulgent of my occasional shilling.)
Newer Post Older Post Home
Posted by G. Kendall at 6:00 AM