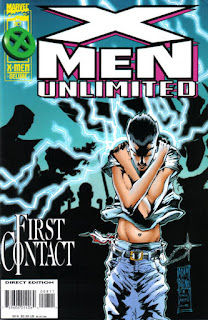 In a Nutshell
Chris Bradley learns he's a mutant, meets the X-Men, and is diagnosed with the Legacy Virus.

Plot
High school freshman Chris Bradley is excited to get to school and ask out his crush, Donna, but when his mutant ability to control electricity manifests, he's has to stay home as his parents try to figure out what's happening to him. Later, when he returns to school, he gets up the nerve to ask out Donna, but when his power again manifests, he runs out of the school and into Jean Grey & Gambit, who have been watching him. They meet with Chris' parents and offer him a place at the Xavier Institute, but Chris turns them down, until his friend Jeff rejects him for being a mutant. At the X-Mansion, Chris meets the X-Men and learns about the Danger Room. He begins learning to control his powers under the mentor-ship of Iceman. However, a routine blood test reveals that Chris has also contracted the Legacy Virus. He is overwhelmed by the news, but after a heart-to-heart with Iceman, comes to accept his fate. His powers under control, he decides to return home and live the best life he can. He attempts to reunite with Jeff, but Jeff still wants nothing to do with him. Donna, however, does, even after Chris tells her about his terminal illness, and Chris rushes home to call Iceman and tell him all about it.

Firsts and Other Notables
This issue introduces Chris Bradley, a young mutant with the ability to create/control electricity. While hardly the most significant of character, this is not Chris' only appearance. He will become a series regular in Maverick's late-90s solo series, serving as a mentee of sorts to the title character, and later, will join an incarnation of the New Warriors using the name Bolt. After that, he turns up in the 00s' Weapon X book, posing as Maverick, in which he ultimately dies (though not from the Legacy Virus). He also technically appears in the horrible Wolverine: Origins film, played by Dominic Monagahan (Charlie from Lost/Merry from Lord of the Rings). 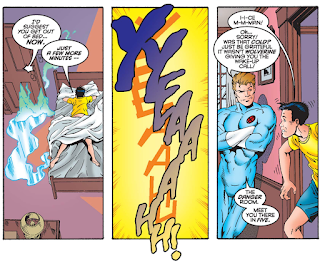 In addition to learning he's a mutant, Chris also learns he is infected by the Legacy Virus in this issue, as that plotline moves ever closer to its "adding background color to a story instead of driving plots itself" phase. 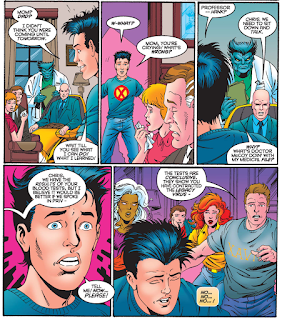 The issue concludes with a pair of pinups and a sneak preview of the next issue. 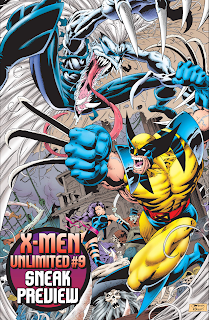 A Work in Progress
As his powers manifest, Chris suffers from headaches, something which afflicted Kitty Pryde when her powers were first manifesting.

They're Students Not Superheroes
It's not entirely clear why Chris is brought to the X-Men/Xavier Institute, instead of to Generation X/the Xavier School for Gifted Youngsters, since that group was specifically meant to represent a group training to control their powers and not to become superheroes.

Human/Mutant Relations
Chris’ friend (who may or may not be Jean-Paul Valley) freaks out upon learning Chris is a mutant. To her credit, his would-be girlfriend Donna is much more accepting of both Chris being a mutant and having the Legacy Virus. 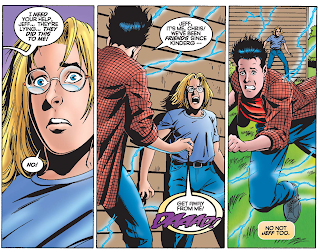 Austin's Analysis
Let's start with a couple caveats: Chris Bradley's later role in the little-read Maverick solo series aside, this issue is hardly an integral component in the X-Men narrative. One could easily skip reading it, and not miss anything of narrative significance. Second, there's really no good reason for this story to not be told using the Generation X characters instead of the X-Men (yes, this is X-Men Unlimited, but it still could have just featured the Generation X cast): not only are the Gen X kids Chris' peers, but the whole idea of Generation X was to create a place for "young mutants learning to cope with their powers" stories like this, transplanting the whole school aspect of the X-Men away from the X-Men themselves so they could focus on superheroing.

But all that aside, this is actually a pretty decent story. Told entirely from Chris' perspective (which also helps cover for Mackie's sometimes-bland scripting, since most of the captions and dialogue are coming from a new character), it uses its extra-length to put the central characters on a narrative arc, from learning he's a mutant, to learning how to cope with his powers, to learning he has the Legacy Virus and starting to come to terms with that. Of course, some of those beats are still a bit abruptly handled (Chris coming to terms with his impending death by killer virus, in particular, is a bit rushed), but for the most part, the character gets to experience more of an arc than most one-off characters in a single issue story.

And while Chris' journey is maybe better suited to be told against the backdrop of Generation X, in general, this is the kind of story the X-Men universe needs to tell on occasion (and the kind of thing told in X-Men media outside of comics far more often than in the comics themselves), one which explores the fears and journeys and prejudices that come with the changes represented by the metaphor of being a mutant, while also showcasing the X-Men as ambassadors of that new reality who, having experienced similar transitions themselves, can help guide a newly-discovered mutant. Of course, we wouldn't want the X-Men to totally abandon their roles as vehicles for entertaining superhero violence, but the occasional check-in on the metaphor at the heart of their story is welcome & necessary, and this issue is a fine example of that kind of story.

Next Issue
Mr. Sinister takes the stage in the X-Men '95 annual!