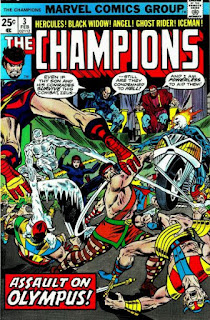 Plot
As Angel, Black Widow and Iceman lament their inability to stop Hercules & Venus from being taken to Olympus, Ghost Rider returns, having found a way for the group to reach the mythical realm: the mountain of ice created by Iceman to block one of the portals Pluto used to come to Earth remains, meaning the portal itself still exist behind the ice. On Olympus, Zeus bemoans his inability to change Hercules' fate. Just then, the Huntsman, passing near the clogged portal, sees the wall of ice explode, revealing the four heroes charging through behind it. They attack Pluto's forces, with Angel knocking out the Huntsman, prompting Hercules & Venus to join the fray. Pluto himself enters the battle, but Ghost Rider convinces Zeus of Pluto's lies & machinations, prompting him to banish Pluto from his sight, ending Pluto's plans. Zeus apologizes to his son, and offers him his choice of punishment for the offenders, but Venus urges forgiveness, with which the rest of the heroes agree. The group, joined by Hercules, then departs for Earth, with Angel wondering what will happen next.