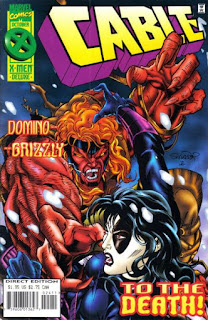 In a Nutshell
Cable learns he has to go back to the future while Domino battles Grizzly.

Plot
Grizzly attacks Domino, and their fight spills out of Grizzly's cabin and into the woods. Meanwhile, Cable brings the unconscious Jenskot to Blaquesmith. When she wakes up, she tells them she was sent to the past to bring Cable to the future in order to save the life of her beloved, Nathan Dayspring. In the Rockies, Domino & Grizzly's fight escalates, and Domino is forced to kill him in self-defense. Before he dies, he tells her Tyler, Cable's son, made him savage as an act of revenge. Back on Blaquesmith's ship, Jenskot realizes that Cable is an older version of Nathan, and reveals that she needs him to go back to the night of an important battle for the Clan Chosen, when Nathan has grown mysteriously ill. He agrees, and Blaquesmith sends them to the future, after which Mother Askani appears, reminding him his work isn't done. In the Rockies, Domino buries Grizzly, then disappears as Blaquesmith also sends her into the future, while Grizzly's cabin burns.

Firsts and Other Notables
Grizzly, Cable & Domino's teammate in the Wild Pack/Six Pack, and later member of Weapon: Prime, dies this issue, as Domino is forced to kill him after he is forced to go savage by Tyler and attacks Domino. Somewhat surprisingly, he has stayed dead since; this marks his last appearance to date (and I have no recollection of where, if anywhere, this whole "Tyler made Grizzly go wild to hurt Cable & Domino subplot is going, or if it's just a one-off act of revenge intended to kill Grizzly and turn the screws for Domino). 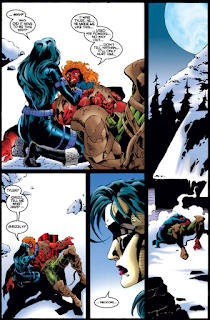 This issue is the first reference to the Askani motto/mantra of "What is...is", a saying I found to be deeply profound as a pretentious teenager but which is ultimately just kind of nonsensical as a philosophical outlook. 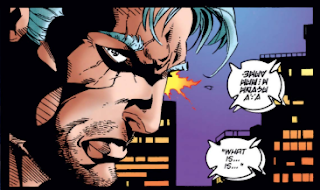 A Work in Progress
Grizzly’s real name is given as Theodore Winchester.

Cable points out the time travel shenanigans afoot, noting his wife never mentioned going into the past to bring his older self into the future (and Cable's own past).

Domino is zapped away from Grizzly's grave at the end of the issue. It's implied (but not outright stated) that's she's being sent to the future as well. 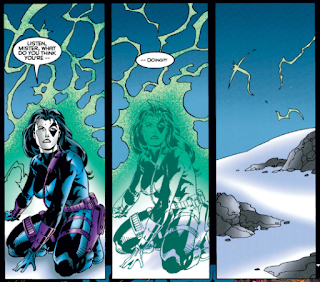 Austin's Analysis
For Cable, this a pretty basic "move the plot along" issue, one which is more concerned with getting the character in place for the events of the next issue than telling a compelling story in its own right. For Domino (whom Loeb has essentially made the co-star of the title at this point), this is much more significant, as she's forced to kill her longtime ally/friend, Grizzly. Of course, it's hard for readers to get as worked up about all that, since Grizzly isn't exactly a rich character with tons of history (though he did get his own action figure...). Even Domino herself is still largely a cipher and, Loeb's appreciated efforts to bring her into her own aside, still principally positioned as Cable's kinda-sorta girlfriend more than a fully-fleshed out character in her own right, making it less likely that readers are yet invested enough in to care when she cares.