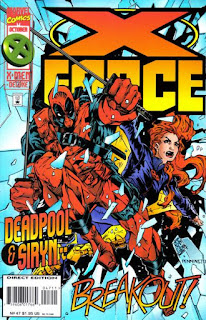 In a Nutshell
Deadpool breaks Siryn out of the Weisman Institute.

Plot
Deadpool breaks into the Weisman Institute and frees Siryn from her power inhibiting collar. However, the pair are unknowingly watched by young Jeremy Stevens. Meanwhile, working together, X-Force manages to fly the damaged PACRAT back to the mansion. At the Weisman Institute, Siryn & Deadpool fight their way to Dr. Weisman, who insists she's done nothing wrong before a brief moment of seeming clarity. Just then, Siryn & Deadpool are telepathically knocked out by Jeremy. Back at the X-Mansion, the boys check in on Shatterstar in the med bay, while Boomer calls her father. Later, Siryn suddenly returns to the mansion, much to Warpath's delight, but Siryn simply tells him she needs to speak to Cable, to whom she declares that everything is fine at the Weisman Institute. Outside, Sunspot laments endangering the team in Siberia, but Cable telepathically assures him everyone makes mistakes. Sunspot thanks him in the language of Askani, shocking them both. Inside, Boomer visits Sabretooth, and is dismayed to learn he can talk. He asks for the Danger Room setting be changed to the forest outside, but gets scared when a holographic Wolverine is included in the simulation. Meanwhile, back at the institute, Dr. Weisman interrogates Deadpool under the direction of Jeremy, who is pleased to have another player in his game.

Firsts and Other Notables
After popping up at the end of the previous issue, Deadpool tries to help Siryn escape from the Weisman Institute in this one, though he ends up captured himself (while Siryn is released back to X-Force as part of the nefarious happenings at the institute). He will next appear in issue #56. 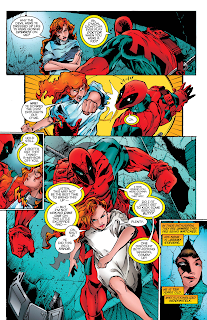 Those nefarious happenings are teased to be the result of the Gamesmaster, last seen seemingly defeated by Paige Guthrie at the end of the "Child's Play" crossover, whose somewhat-iconic silhouette is shown behind Jeremy Stevens at the end of the issue.

Sunspot subconsciously speaks in Askani (the language of the cult/religious order in which Cable was raised in the future) to Cable this issue, much to both their surprise; this is meant to be furthering the mystery of what, exactly, Cable did to "free" Sunspot of Reignfire between issues #43 and #44 (the idea will eventually be that when Cable telepathically suppressed Sunspot's dark urgings, which manifested as Reignfire, he left a bit of his own knowledge in Sunspot's mind, including how to speak Askani). 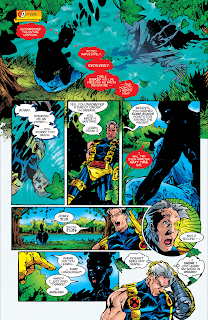 Boomer calls her dad (who previously appeared in a not dissimilar form during "X-Tinction Agenda" to denounce his mutant daughter) this issue, but doesn't speak to him, which is seemingly meant to suggest that Boomer's infatuation with helping Sabretooth is tied, in part, to issues with her abusive father. 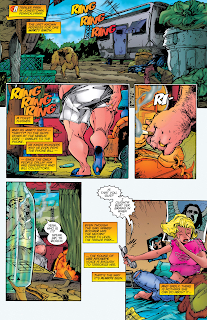 A Work in Progress
It's been mentioned in passing before, but Siryn's status as X-Force's deputy leader (now that Cannonball has graduated) is mentioned again. 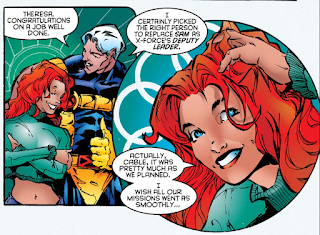 Sabretooth has regained the ability to speak between last issue and this one. 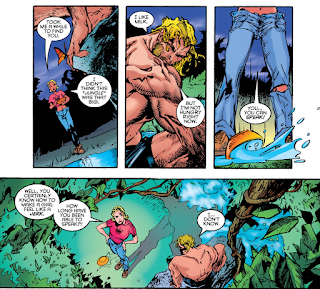 It's in the Mail
The same month that an upcoming appearance by Karma was teased in the Excalibur letter column, a response to a letter in this issue suggests that both Dani Moonstar and Karma will be returning to this series soon.

Austin's Analysis
Ostensibly, this issue seems intended to move the Siryn/Weisman Institute subplot into the foreground, featuring her big breakout alongside Deadpool (based on the cover if nothing else). But in practice, Loeb dedicates just a few of the opening pages to that story, before shifting back to the mansion and his various other ongoing plot threads, looping the Siryn plotline back in just enough to make clear both that it is still ongoing (even if Siryn is back with the team), and back in the realm of subplot for now. In doing so, he continues his somewhat-curious approach to the book, a sort of Claremont-lite "series of plotlines" style, in which he keeps a handful of narratives (the Boomer and Sabretooth stuff, Sunspot's post-Reignfire identity issues, the Gamesmaster's machinations at the Weisman Institute, the general "expanding their powers" dictate) simmering at once, moving them on and off the front burner from issue to issue without really committing to any one particular one as the A-plot of a given issue. It's an approached that worked well for Claremont later in his run, when he was working with an expanded roster of characters he had carefully developed over years. Here, it's a little more jarring, as the advancements in any given plotline are so incremental it feels like the series as a whole is largely spinning its wheels, even as each arc is, technically, progressing from issue to issue.

Next Issue
Tomorrow, Wolverine serves as a guest-lecturer in Wolverine #94. Next week, X-Men Unlimited #8!