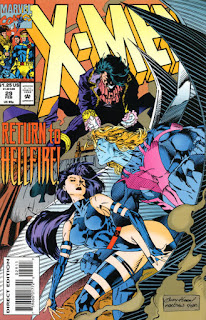 In a Nutshell
Archangel & Psylocke attend a party at the Hellfire Club.

Plot
Archangel watches alongside Beast & Professor X as Psylocke challenges Sabretooth in the Danger Room. Afterwards, amidst preparations for Scott & Jean's wedding, he ponders his romantic history, then receives an invitation to the Hellfire Club's annual gala, sent by Shinobi Shaw, with whom Archangel was friendly as a child. Spotting it, Psylocke reveals she too is a member of the club, and the pair agree to attend the party in the hopes of learning more about the Upstarts. At the party, the pair are knocked out by Tessa, Shaw's assistant, and awaken to find Shinobi waiting to offer his old friend Archangel the place of White King in the Inner Circle Shaw is hoping to rebuild in his image. When Archangel refuses, a fight breaks out, which ends when Psylocke uses her psychic knife on Shinobi, forcing him to relive all his paternal angst. Archangel & Psylocke then depart, leaving Shinobi what he's always been: alone.

Firsts and Other Notables
this issue is considered the start of what will turn out to be a fairly long running romantic relationship between Psylocke & Archangel, a relationship that will be something of a thing over the next few years, then disappear for awhile, before becoming one of the centerpieces of Rick Remender's X-Force run. Though the pair mostly just attends a party together here (and as part of an X-Men mission, to boot), Nicieza is clearly laying the groundwork for a romantic relationship, one he and Lobdell (over on Uncanny) will develop over time, with the starting point of their relationship here being mostly that they're both children of privilege (later stories will also touch on the fact that they've both experienced significant bodily transformations and served as agents of villains as a result) which, frankly, is a more solid foundation for a relationship than some of the other more marquee X-couples have (I mean, for all their angst, the starting point for Rogue & Gambit is what, they're both Southerners?).

Shinobi Shaw declares his intent this issue to reform the Inner Circle of the Hellfire Club (and offers Archangel the title of White King, to Shinobi's Black King), the first of several attempts by various characters (including Shinobi and his father Sebastian) to bring back that group, none of which have had much staying power or come close to rivaling the effectiveness/notoriety of the first group. 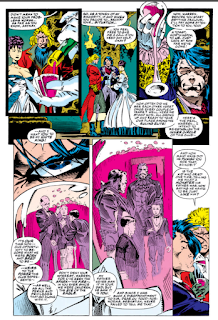 Tessa, Sebastian Shaw's longtime telepathic aide, is shown to be serving Shinobi here, suggesting her loyalty comes with the title of Black King or is tied to the club itself (of course, it will later be revealed that Tessa is a sleeper agent of Professor X, making this another example of where that retcon doesn't quite work, as it seems like the X-Men probably could have learned more about the Upstarts from Tessa if they really wanted to, considering she is now working with Shinobi, unless her cover was so deep she never made any contact with Xavier, in which case, why bother having her as a sleeper agent?). 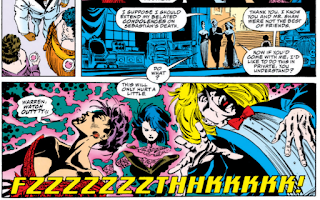 Nicieza uses the Hellfire Club gathering to briefly tease the "Child's Play" crossover between X-Force and New Warriors (beginning next month), which will closeout the Upstarts plotline once and for all, by having the New Warriors' leader, Night Thrasher, appear at the party in his civilian guise. We'll see this party from his perspective, including a brief cameo by Archangel & Psylocke, in X-Force #32.

Also, Ronald Parvenue, Lady Deathstrike's recent ally/benefactor over in Wolverine, is for whatever reason on hand at the club, making a brief one-panel appearance that stands as his final appearance to date. 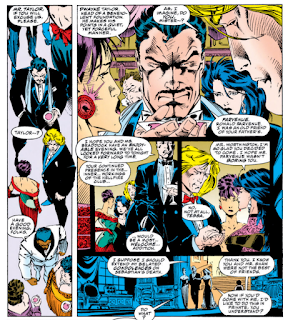 This issue establishes that like Archangel, Psylocke is also a member of the Hellfire Club via inheritance, with her father having been a regular at the club's London branch (the Braddock family's involvement with the Hellfire Club will later be revisited during Warren Ellis' Excalibur run as well). 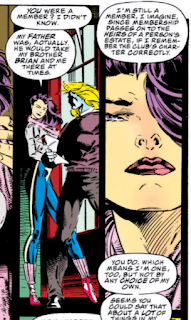 In a somewhat awkward bit of exposition (likely intended for newer readers), Psylocke asks Archangel to explain the X-Men's whole deal with the Hellfire Club to her; while Psylocke joined the team shortly after the group stopped having regular encounters with the Inner Circle, given how instrumental they were in one of the X-Men's greatest defeats (the death of Jean Grey - who for a good chunk of Psylocke's initial tenure with the team, was still considered dead, even after she'd officially returned and was appearing regularly in X-Factor), it seems like the kind of thing Psylocke would have heard about from Storm, Wolverine or Colossus long before this. 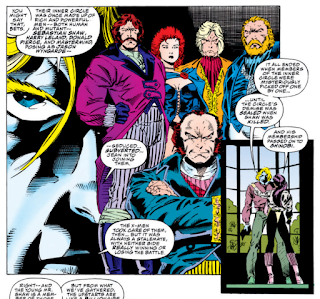 There's another one of those unremarked upon moments I can't help noticing where heroes are knocked out wearing civilian clothes but then wake up in other clothes (in this case, old timey Hellfire Club attire), suggesting here that Shinobi (or Tessa, or some Hellfire goons) must have stripped down Archangel & Psylocke and then dressed them.

A Work in Progress
Sabretooth appears wearing his full set of manacles and muzzle on the opening splash, in what is essentially his default look during his time in the mansion. 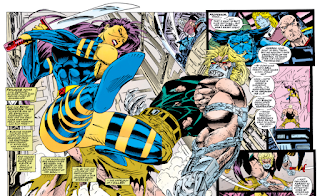 As of this issue, the Cyclops/Jean wedding is "Saturday". We briefly see the grounds of the mansion being prepared for the ceremony. 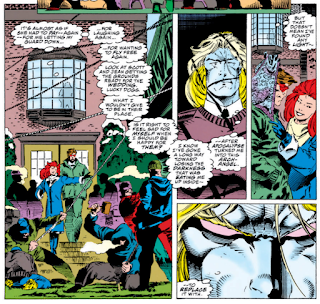 Archangel & Psylocke accept Shinobi's invitation to the party in part to learn more about the Upstarts, but they ultimately don't really learn much at all (and, again, see above re: Tessa). 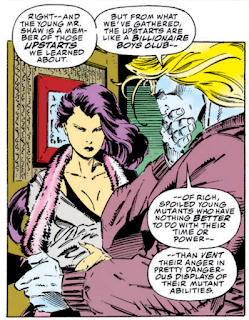 This issue reveals that Archangel & Shinobi were childhood friends who played together when their fathers were attending Hellfire Club events, making Shinobi the second of Archangel's former friends to become a villain (along with Cameron Hodge).

In a nice touch of artistic continuity, Shinobi's pitch to Archangel & Psylocke to join the Inner Circle occurs while he's sitting in the playing card-themed chairs the Inner Circle used in their earliest appearances. 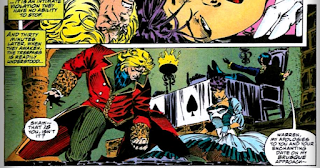 Archangel is for some reason shocked to learn Shinobi is a mutant, despite having earlier mentioned how the Upstarts are a group of mutants. 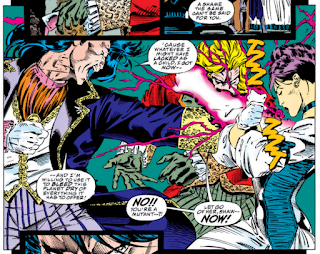 Also, Jubilee is wearing her (Kubert-specific liquid metal) rollerblades in the mansion.

Psylocke emerges from her Danger Room session with Sabretooth via a ridiculously cheesecake-y image, which is saying something considering her regular attire is essentially just a bathing suit. 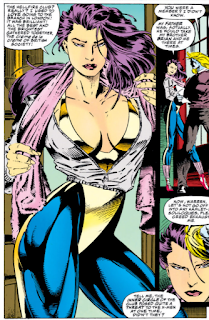 Young Love
Warren angsts over having lost Candy Southern all over again, after her brief return in Uncanny #306. He also admits to Beast his relationship with Charlotte Jones is at a romantic standstill, which is more or less news to us - while the pair hasn't really done a lot together since their aborted date to Lila Cheney's concert in Uncanny #294, Charlotte has made a few appearance here and there since and there's been no indication of a freeze between them. In fact, the Marvel Chronology Project considers Charlotte as having been at Thanksgiving in Uncanny #308, which has to have been just a few days, maybe a couple weeks before this one (maybe they called things off, off-panel, then?). Ultimately, this is all just an excuse to clear the deck for a Psylocke/Archangel romance (and, for what it's worth, Archangel compares his relationship to that of Beast & Trish Tilby's, which similarly hasn't been focused on much lately but was implied to still be a thing as recently as "Bloodties").

It's in the Mail
This issue has a two page letters page, running reactions to issues #26 & #26 and featuring a small reproduction of next issue's cover. One of the responses states that Magneto killed "thousands" as a result of his EMP attack in issue #25, an idea that I think gets downplayed in the years ahead, as the character cycles back around to a more anti-heroic role as opposed to outright villainy.

Austin's Analysis
Continuing this series' recent trend of featuring done-in-one stories that have less connection to events in the series itself than other cornser of the X-universe, this issue tosses Psylocke & Archangel into a story about Shinobi Shaw trying to resurrect the Inner Circle of the Hellfire Club, while also briefly setting up the "Child's Play" X-Force/New Warriors crossover and featuring a fairly random appearance from a minor Wolverine character. It's not a bad story - the Archangel/Psylocke pairing, built on their shared past as children of privilege & history of physical transformations and metnal manipulation, will prove to have a lot of mileage to it (far moreso than Shinobi's Hellfire ambitions), and positioning Shinobi as a former friend of Warren's and leader of the next generation of the Hellfire Club is a far better use of the character than his involvement in the Upstarts and Yakuza business (in part because it gives him a stronger connection to both one specific character - Archangel - but also the X-Men as whole, because he now more directly represents the next generation of one of their worst enemies). But of all the recent "disconnected" issues of this series, this still feels the most like the one which fails to answer the question of "why this story at this time", and as a result, it's the one that feels the most like Nicieza is simply biding his time for something bigger (maybe the wedding next issue?) by just throwing an idea to the wall and seeing if it sticks.

Next Issue
Tomorrow, Siryn goes home in X-Force #31. Friday, Mr. Sinister drops by in Excalibur #74. Next week, "Unstacking the Deck" takes a look at Fleer Ultra X-Men series I.