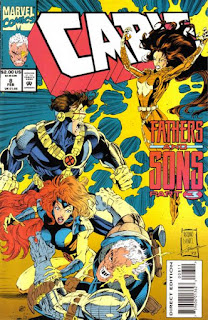 In a Nutshell
The truth about Cable & Stryfe is revealed

Plot
Stryfe blasts Tyler and obliterates Askani's energy form, but Tyler's connection to her still allows him to show Stryfe events from his past. Meanwhile, Zero details Cable & Stryfe's survival to Cyclops, Jean, Xavier, Domino, Rictor & Siryn, then teleports Cyclops, Jean, Xavier & Domino to Tyler's base. They arrive just as Stryfe witnesses the truth of his origins as a clone of Cable captured by Apocalypse. A battle ensues, but Zero is able to reconstitute Askani, who, with Xavier & Jean's help, brings the group into Stryfe's mind, where they relive the tragic events of his childhood, as well as Cyclops' & Tyler's troubled pasts. Askani pleads with Stryfe to give up his hold on Cable's body, which he does, but only because he realizes that by dying, he takes the hope of curing the Legacy Virus with him. Cable, now in control of his own body, slumps to the ground, and Cyclops embraces the man he now knows to be his son. Cable asks after Tyler, whom Xavier declares escaped while they battled Stryfe. With that, Cable is eager to move on, but Cyclops asks if there's anything he wants to say to him, or ask about. Cable pauses, then declares he'd like to know a little more about his mother.

Firsts and Other Notables
This issue confirms, once and for all, that Cable is Cyclops' son, Stryfe is his clone, and reveals that information to all the relevant parties (including Cyclops, Jean, Domino & Xavier).

It also marks the end of Stryfe, as he is defeated in a somewhat confusing scene that seems to suggest Jean just convinced him to give up his hold on Cable's body out of the goodness of his heart. Stryfe will make a few more returns through the years (including, of all places, a Gambit/Bishop limited series), but this more or less marks the end of a character who, for a couple years at least, was one of the top X-villains in terms of exposure. 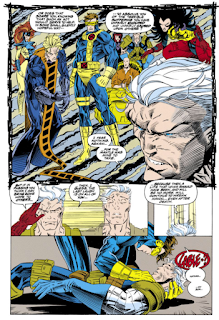 In the wake of all the familial revelations, Cyclops & Cable share a scene with full knowledge of their relationship, though Cable doesn't exactly embrace Cyclops as his long-lost father (their relationship will continue to be explored - and, over time, softened - in future stories). 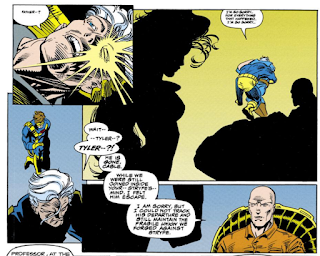 This issue fills in the gap between Cable & Stryfe's apparent demise at the end of "X-Cutioner's Song" and their return in the first issue of this series, revealing that the explosion at the end of "X-Cutioner's Song" tossed them into the timestream and destroyed Stryfe's body, but that his conscious latched onto Cable's body, and eventually the pair were spit out in the far future (beyond even their original time), at which point they jumped back to the start of issue #1. 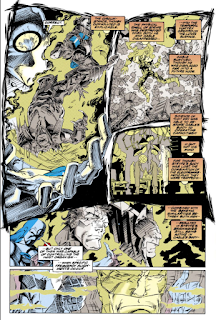 After mentioning the need to get information from Stryfe about the Legacy Virus last issue, this one teases the idea that Cable may hold the key to curing it, one of the several "possible cures to the Legacy Virus" ideas that get teased, then mostly dropped, around this time. 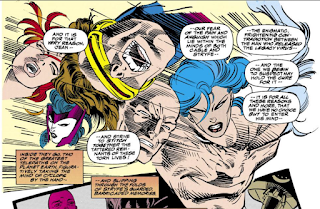 This issue features the first on-page meeting between Cable & Professor X, both in-universe and, to date, out-universe, though later stories will retcon in previous encounters between the two prior to Cable's first appearance (including Cable having helped Xavier with the mansion's security system). 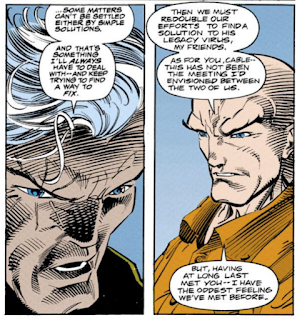 Tyler disappears by the end of this issue, but he will return shortly as "Genesis", leading a new incarnation of Dark Riders.

Stryfe's upbringing, after being claimed by Apocalypse as an infant, is glimpsed briefly; more of his time with Apocalypse will be explored in the upcoming Adventures of Cyclops & Phoenix miniseries. 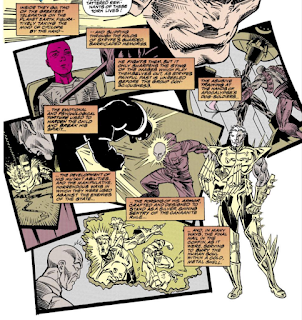 A Work in Progress
Via a weird combination of Askani's existence and Tyler's powers, the moment when Stryfe is cloned from Cable is depicted, as Stryfe is created out of fear that baby Nathan won't survive the techno-organic virus. 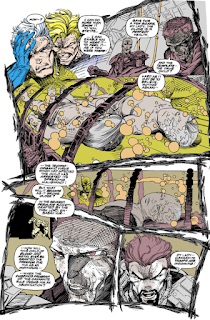 While not explicitly stated here, the confirmation that Cable is the original Nathan Summers opens the door to the notion that what had previously been considered bionic implants of Cable's (his arm, eye, etc.) are actually manifestations of the T-O virus (in that the virus has claimed those parts of his body but he's holding it in check so it doesn't spread elsewhere), a notion that more or less flies directly in the face of some earlier depictions of Cable's cybernetic nature, but is a retcon which is nevertheless not that hard to accept so long as you squint a little while doing so.

Nathan's age at the time he was sent in the future has always been inconsistently depicted (and, of course, it's always compounded by the whole sliding timescale thing), with the moment he's sent to the future sometimes depicted as though he's still an infant, and other times, like he's a toddler. This issue states he was "barely a year old" at the time.

It's revealed that after his apparent death at Stryfe's hands, Tyler was rescued by General Haight, the guy who sent Sinsear back to kill Tyler earlier in the series.

There's a discussion about the Legacy Virus that was clearly re-lettered (as well as the Cable/Xavier meeting). 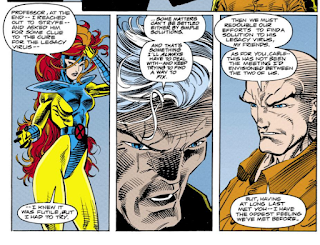 The Grim 'n' Gritty 90s
Stryfe's gun in this issue is once again portrayed as being ridiculously large to the point of parody.

Austin's Analysis
"Father and Sons" concludes consistent with the issues which preceded it: more exposition than story, featuring inconsistent and often dicey art (the vast majority of this issue takes place in front of a blinding white backdrop, because apparently none of the eight inkers had time to put in any backgrounds). But this issue does provide two long-overdue things. For one, it settles once and for all the relationship between Cable, Stryfe & Cyclops (with the former the son of the latter, and Stryfe the healthy clone of Cable), something that had long been teased & reversed and un-reversed prior to this, but which has stood up since this issue was published. For another, it allows for a moment between Cyclops & Cable, with the full knowledge of their relationship known to both men, to acknowledge all that has passed between them. It's brief (later stories will do much more to explore the relationship between these two now that everything is out in the open), but nevertheless an appreciated coda to the events of X-Factor #68. In fact, in terms of its impact on both the narrative as well as the emotional relationship between Cyclops, Cable, Stryfe & Jean, "Fathers & Sons" is, over a year later, the epilogue that "X-Cutioner's Song" really needed. The most frustrating thing about that story was the way it backed away, at the very end, from providing the answers this story gives.

Ultimately, this is a deep dive into some of the most tangled elements in all of X-history. As a story, it's cluttered, with too many characters (Askani, Tyler, & Zero are all mostly just here as exposition vehicles rather than characters in their own rights) and requires too many flashbacks to get all the necessary information out, while the art is only ever briefly engaging. But in answering the most significant questions surrounding its title character, it will allow the series (and that character) to move forward, while also redeeming the biggest failing of one of the franchise's most ambitious crossovers. Even for a continuity wonk like me, who was initially drawn in, rather than repulsed, by the complexity of the X-Men narrative, it's hard to imagine any new readers picking up this story and feeling connected to either the series itself or the overall narrative, but for existing readers and students of X-continuity, "Fathers and Sons" is exactly what this series (and the franchise) needed.

Next Issue
Tomorrow, Unstacking the Deck looks at the Fleer Ultra X-Men set. Next week, the wedding celebration begins in X-Men: The Wedding Album.