Firsts and Other Notables
X-Men Series V features a first for the line, an exclusive-to-the-animated-series figure in Morph, created to serve as cannon fodder in the series initial two episodes. 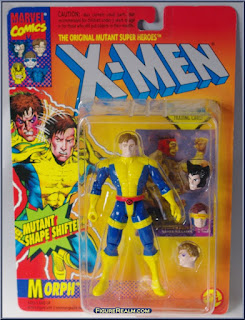 Series VI features the first Rogue figure, only the second female figure (after Storm) to be featured in the line. As memory serves, she was always a difficult figure to find, as being short-packed (because stupid toy executives didn't think boys wanted to play with female action figures as much as male ones), there were fewer of her on the shelves, and being packed with a line of relative peg-warmers (Series VI was the lowest-selling wave of the line to-date, leading some to fear the entire line would be cancelled) meant there were tons of other figures constantly on the shelves, but very few Rogues. 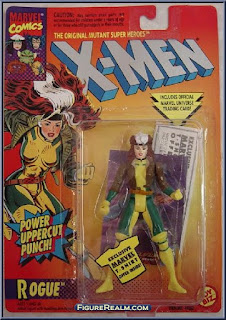 The Senyaka figure in series VI was a Toys R Us (RIP) exclusive, though that didn't prevent it from being a perpetual peg-warmer as well, because who was really crying out for a Senyaka figure (I mean, *I* had one, but only because no better figures were available for purchase the day I bought him).

The Silver Samurai figure, which looks nice (shuny!) is notable for having terribly articulation: the knees bend, and the arms can raise (but not very far, because of the massive shoulder pads), but it is otherwise just a big ol' hunk of plastic.

Beast, which is otherwise a pretty great figure, comes with an action feature that is ostensible meant to flip the figure in mid-air: the thigh joints are spring loaded, and a small (thankfully fairly unobtrusive) lever on the back are meant to push the figure into a crouch until released, at which point the figure pops up and over itself. In practice, I could never make the figure do anything over than fall over.

Series V token Wolverine figure is, actually, a stealth figure of Albert, the robot Wolverine who teamed up with Elsie Dee early in Hama's Wolverine run (and who will be appearing in it again shortly). Albert is hardly a figure that needed to be included (he'd appeared in all of a handful of issues at this point), but if Toy Biz felt the need to pack at least one Wolverine into every assortment, making one of them double as an actual unique character is not a bad way to go. 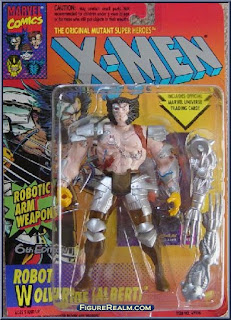 Bonebreaker (a puzzling inclusion, as the character was long dead in comics at this point and was not a fixture of the cartoon) is another unique figure, as it's really half a figure mounted on tank treads. Kudos for Toy Biz for thinking outside the box, and the figure does strike a neat profile amongst the other "regular" figures, but I nevertheless recall it being a perennial peg-warmer as well.

Series VI features a pair of figures from the Starjammers - another odd inclusion, though presumably, Toy Biz was aware of the animated series' upcoming "Phoenix Saga" run (in which the Starjammers feature heavily) and was getting some figures out ahead of that story (which will inspire a wave of figures all its own).

For the first time, the X-Force series features more members of X-Force than not: in addition to the requisite Cable variation (an "air assault" figure that, as far as I know, is not directly inspired from a comic book look), Shatterstar gets a second figure, featuring his new Greg Capullo-designed costume (and is all around a pretty solid figure), and both Rictor & Sunspot make their action figure debuts.

Somewhat puzzling, Mojo is included in the X-Force series (puzzling because outside of one annual, he's predominantly an X-Men villain); it almost seems like Toy Biz designed the figure, ran out of room in the X-Men waves, and just dropped him (and Quark) into the X-Force line.

Thanks to Raving Toy Maniacs, Figure Realm, and Cool Toy Review for the pics. Picture sources

Of Their Time
Random gets his own figure, making him only the second member of All-New X-Factor to receive a figure (and that's when generously counting Random as a member; at this point in the comics, he's hired help, at best.)

Fitzroy's figure is based mostly on his appearance in Uncanny X-Men #301-302 and comes with snap-on "crystalline" armor that, like Silver Samurai's armor, restricts the figure's articulation. 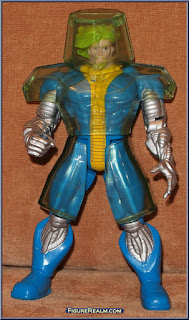 Senyaka not only gets his own figure, but a retail-exclusive figure, despite being dead.

Similarly, Kylun, despite having already been written out of Excalibur, is the first member of that team to receive his own figure (not counting the Nightcrawler released as part of Series I).

Pyro's inclusion amongst the X-Force figures seems odd, given how he's generally regarded as a classic X-Men villain (and he was one of the bosses in the arcade game), but it is most likely inspired by X-Force having hosted the debut of the then-current Toad-led iteration of the Brotherhood of Evil Mutants.

And finally, Quark, presumably on the back of his appearance in one chapter of the "Shattershot" story in the '92 annuals, receives a figure ahead of a vast number of long-standing X-characters.

Favorite Figures
The Morph figure is probably the best of this bunch, cleverly representing his power (via a series of heads - Wolverine, Cyclops, and Angry Post-Resurrection Morph - that can be swapped in for his own), with the end result, thanks to his wearing a standard X-Men training uniform, being a figure that can easily stand-in for other figures (Morph with the Wolverine head looks a lot like the third Wolverine figure from Series II), upping his playability.

Beast is another great figure, a great big honking chunk of plastic representing one of the bedrock X-characters. 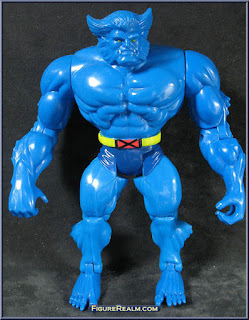 Rogue's figure is a lot smaller than some of the others in this line, but having another female in the line is greatly appreciated, and the representation is pretty solid.

Despite the oddness of his its inclusion, the Quark figure is actually a lot of fun. It's bulky, but well-articulated, with a fun but unobtrusive "quick-draw" action figure. Quark has a character is barely a non-entity; as a result, it was easy to drop this figure into various scenarios and use him in a variety of ways. 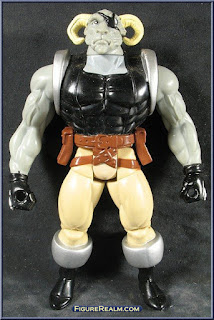 And finally, the Mojo figure is a delight, another massive figure that captures the essence of the character. There's not much in the way of articulation, but the scale of personality make up for it. 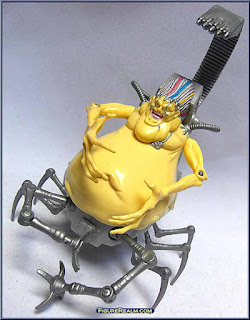 Austin's Analysis
In a lot of ways, the '94 figures represent the best and the worst of the line. On the hand, figures are getting bigger and more detailed, opening the possibilities of the line (if they can make a Mojo figure, they can make anyone...), while action features continue to become more unobtrusive (Beast's backflip may not work very well, but at least there's not suction cups affixed to his hands and knees). These series also really start to show the influence of the animated series - Morph, obviously, but it's also doutbtful we'd have gotten a Rogue figure if not for her animated popularity, and even Civilian Wolverine (an otherwise not-terrible variation on Wolverine let down a bit by his awkward elbow-less arms) comes straight from the screen in terms of his look - but the comics continue to serve as inspiration, for better and worse (Silver Samurai, Fitzroy, Bonebreaker).

This batch of figures also crystallizes a third motivation behind which characters get rendered in plastic, with figures like Bonebreaker, Senyaka, and Kylun suggesting an eye on general playability over cartoon or comic relevancy. There's no good reason to make a Bonebreaker figure in 1994, except that a guy who's half tank would be fun to play with. Similarly, a lot of the members of Excalibur have difficult powers to translate into action figure form (a half-transparent Shadowcat would be cool, but wouldn't really entice the kids), whereas Kylun, despite his lack of fame, is a guy with two swords. Similarly, Senyaka is a nothing of a character, but he's got whips, making the walk from those whips to a button on the back which activates his "whip-cracking action" a short one.

At the same time, this wave of figures suffers some of the worst figures in terms of playability, from Silver Samurai, who is a nearly-immobile hunk of plastic, to Beast's awkward action feature, to Random, who has some nice heft to him but sacrifices articulation for the ability to "shoot" (non-springloaded) missiles from his arm gun. Mojo is a great addition from a fan perspective, but from a playability perspective, he doesn't really do much. The end result is a batch of figures with something of an identity crisis: inspired by both the comics of the time and the cartoon, with an emphasis on both fan favorites and playability, and featuring both some of the best figures of the entire line and some of the worst.