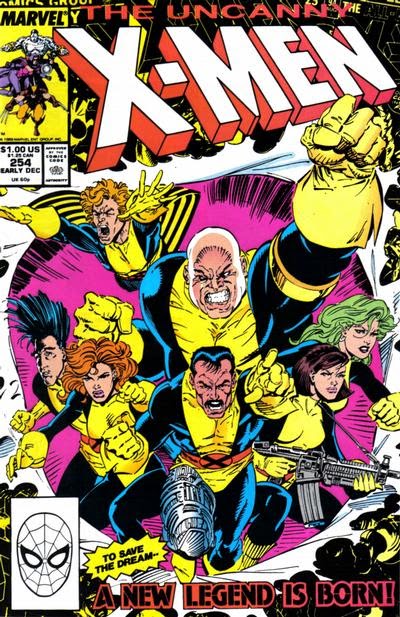 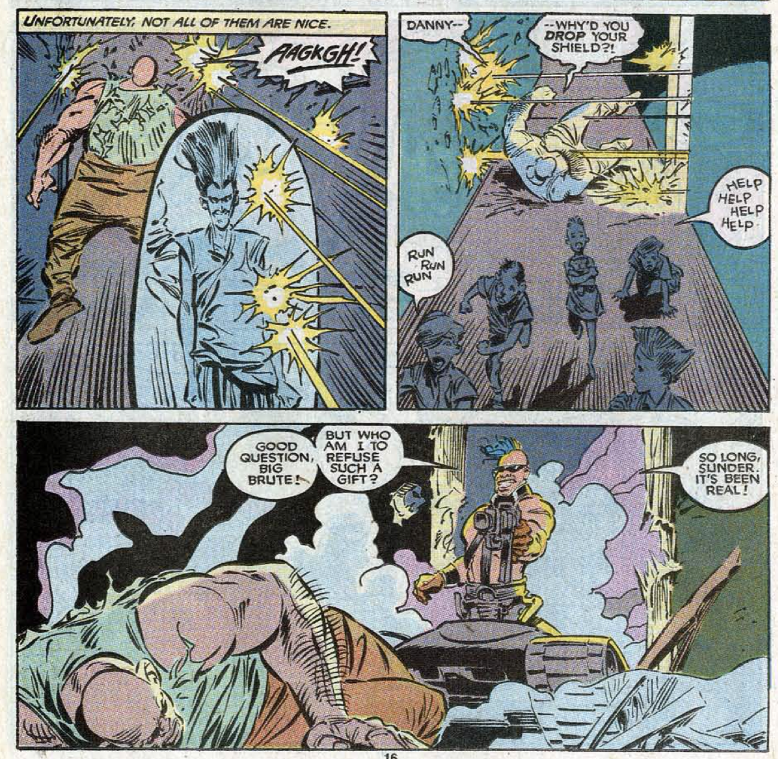 Tom Corsi and Polaris fight back, as does Legion, though he seems to be helping the Reavers as much as harming them. Elsewhere, Destiny has a vision of the future, just as Val Cooper calls with a mission for Freedom Force. Back on Muir Isle, Amanda and Brigadier Stuart defend the beach, but are captured. In Washington, an outraged Mystique is ordered to work with Forge to help defend Muir Island. Back on the island, the Morlock Healer finishes healing Banshee, who notes how much wilder Moira has become. Meanwhile, a revived Sunder attacks Skullcrusher, but is shot in the back by Pretty Boy. Regrouped, the Reavers set out to finish the job and kill the rest of the island's defenders.

Firsts and Other Notables
This marks the first appearance of the Muir Island X-Men as a group, a collection of X-Men supporting characters based on Muir Island. More a fan name than one used in the narrative itself, the Muir Island X-Men become one of the various focal points of the series during the non-team era, lasting even after the main X-Men team reforms and Claremont leaves the series, all the way through the "Muir Island Saga".

They all wear a variation of a new unified look for the X-Men, an updated take on the New Mutants' old school uniforms, designed by Jim Lee. Like the New Mutants' uniforms, these are said to function as body armor (and regulate body temperature). They will later be adopted by the reformed X-Men post-"X-Tinction Agenda" and, in the case of Forge and Banshee, linger even after Jim Lee creates a bunch of new looks as part of the '91 relaunch.

With the absence of Wolverine, the sole remaining living/non-missing member of the team, this is technically the first issue of the series in which no current X-Men appear (unless you count the Silver Age issues in which the X-Men had disbanded per the FBI's request but continued to appear in the series).

Professor Xavier's son, Legion, last seen residing on Muir Island in New Mutants #44, pops up in this issue (erroneously referred to as Daniel, not David), the first time he's appeared in an issue of X-Men. He is seen both helping and hurting the Reavers, seemingly at random, throughout the issue, and will end up playing a significant role within the Muir Island X-Men moving forward.

When Amanda Sefton tries to magic everyone into the X-uniforms, she accidentally puts everyone into S&M gear; sometimes mistakenly attributed to the Shadow King's influence, the snafu was actually caused by Legion's evil Jack Wayne persona who, his worst impulses drawn out by Lorna's new powers, is subtly influencing everyone on the island (Legion will later be taken over by the Shadow King, who then begins corrupting everyone on the island himself, but he's not there yet). 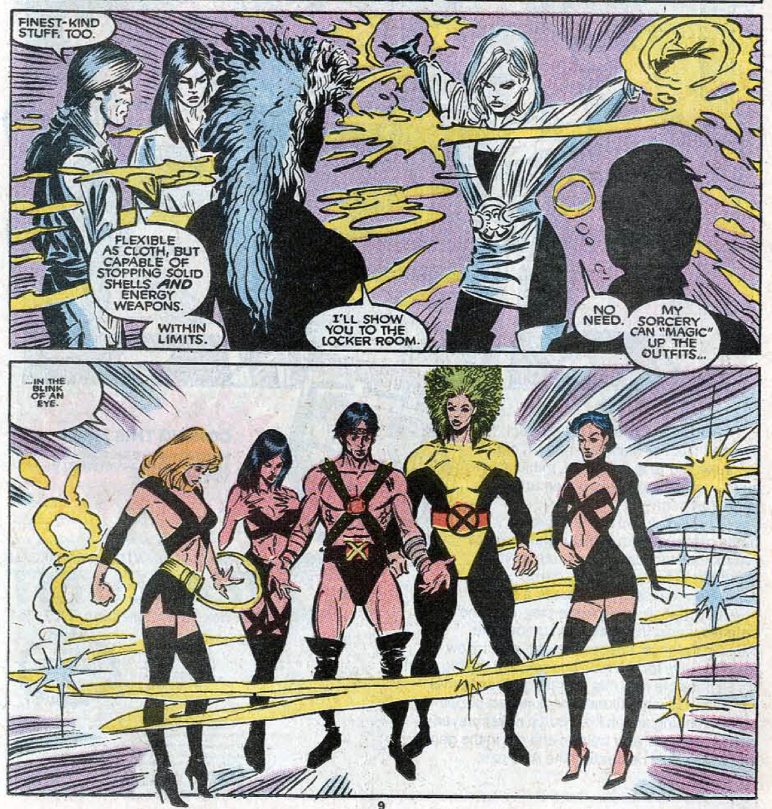 Similarly, this issue introduces "Dark Moira", as Banshee notes her changed demeanor and dress of late. She too is being influenced by Legion and will later be influenced by the Shadow King, and her more sexualized appearance will remain a consistent part of her portrayal across the X-books up through the "Muir Island Saga".

Tom Corsi and Sharon Friedlander, the former last seen in issue #212 and the latter in Fantastic Four vs. the X-Men #2, pop up in this issue, Sharon as a nurse working with Moira and Tom as Banshee's deputy security chief for the island. Both are considered members of the Muir Island X-Men.

Callisto, in New York sealing off the X-Mansion, is captured by Masque, last seen in X-Factor #16, in charge of the remaining Morlocks in New York. Masque and his band of Morlocks will remain a recurring antagonist for several X-teams well into the '91 relaunch. 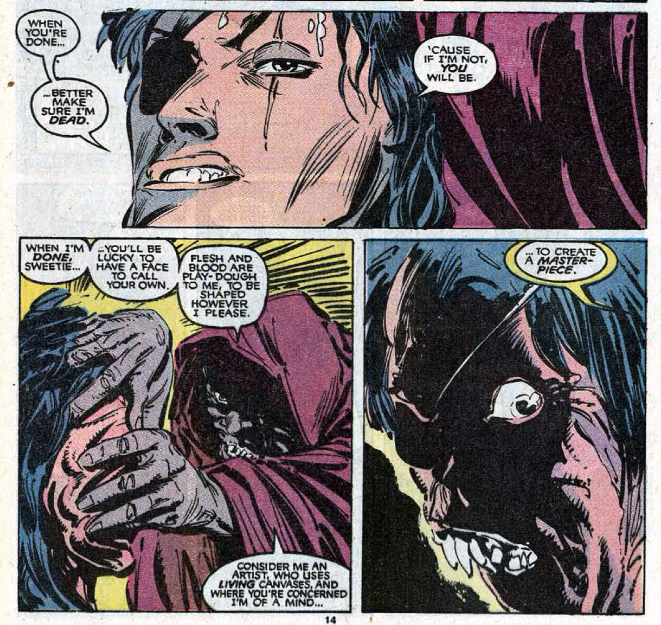 The Warpies, a group of children mutated by dimensional energies released after the reality manipulations of Mad Jim Jaspers in Captain Britain's solo series, are shown to be on Muir Island in this issue, and are targeted along with everyone else by the Reavers. They'll pop up again later in Excalibur. 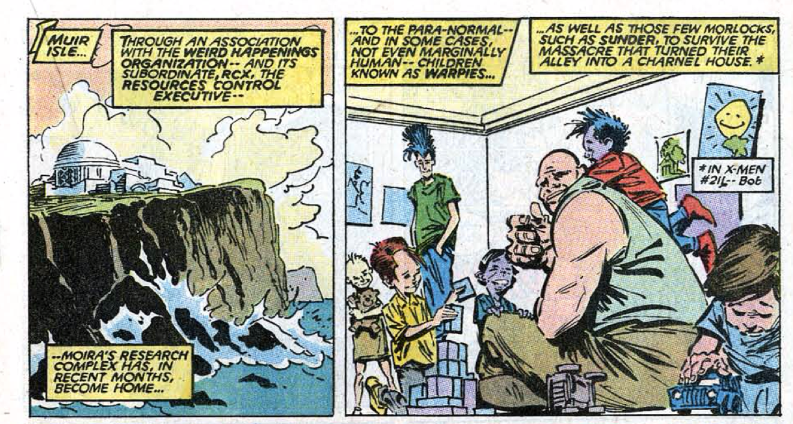 Destiny says that despite Mystique's hatred of Forge (she blames him for Rogue's "death" during "Fall of the Mutants"), their futures are intertwined. This turns out to be true, as Forge ends up caring for then-insane Mystique circa issue #290, and later the pair serve together in the government-sponsored X-Factor. 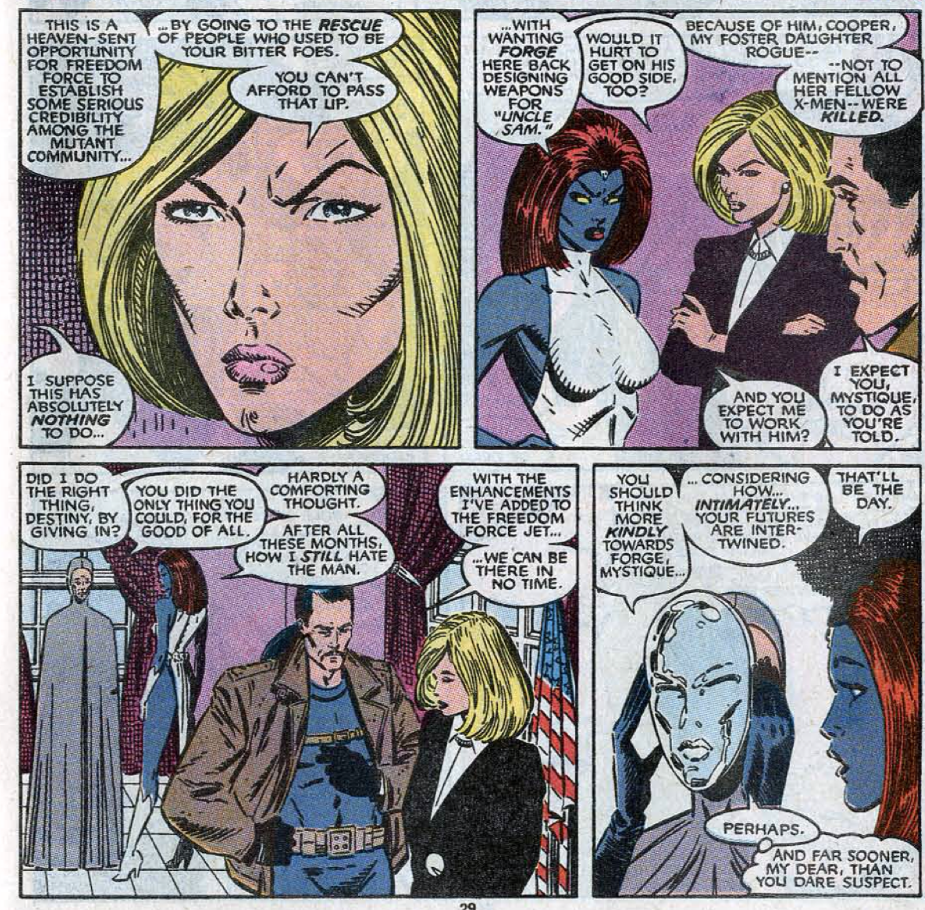 Sunder, the super-strong Morlock who survived the Marauders attack and ended up on Muir Island with Callisto, is killed this issue by the Reavers. 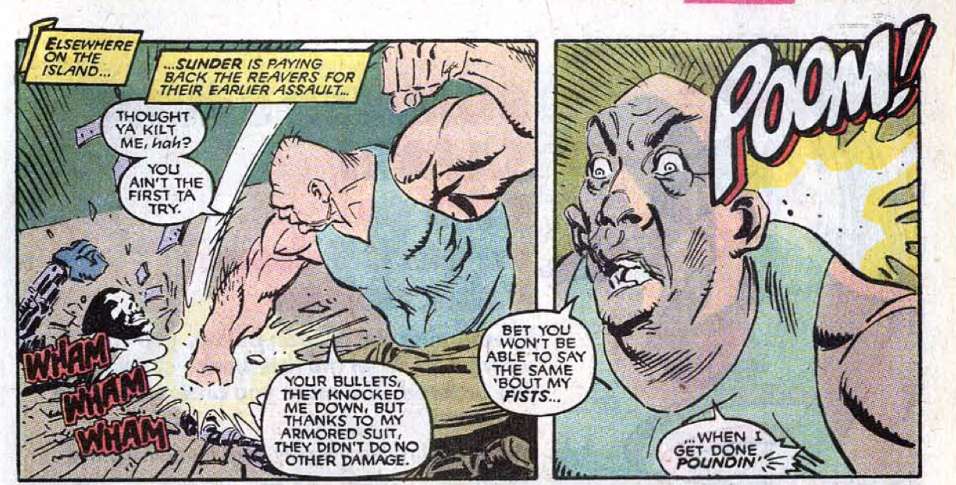 The Morlock Healer, who also made the post-massacre exodus to Muir Island, pops up this issue to help heal Banshee's gunshot wound. 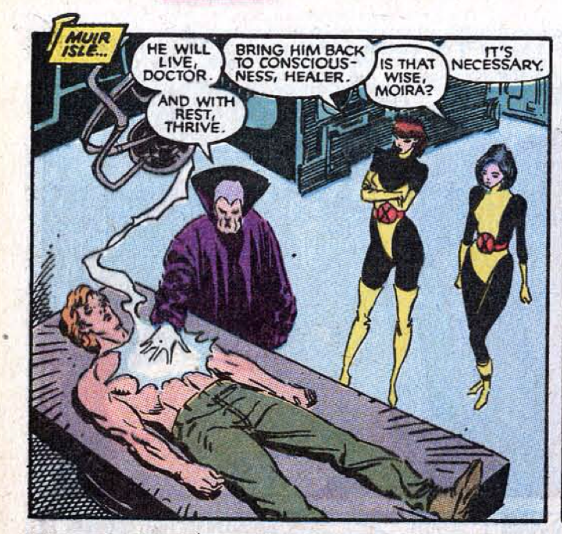 Amanda and Stuart are captured by the Reavers in this issue; however, they are completely absent from the next issue. The former will pop up again later amongst the Muir Island X-Men, while the latter next appears in Excalibur #30.

The cover of this issue is, of course, an homage to Giant-Sized X-Men #1. It is somewhat misleading in that Forge does not appear as part of the Muir Island X-Men in this issue, neither Legion nor Sunder appear in uniform in the issue, and Tom, Sharon, and Alysande are absent from the cover.

The series returns to monthly publication as of this issue; however, Marvel at the time was in the process of adjusting their cover-date policy such that the cover date on all issues of all their series would be two months ahead of the on-sale date, rather than three. As a result, the cover date of this issue and all other series on sale for the next two months reflect an accelerated shipping schedule (which is why New Mutants, X-Factor and Excalibur issues from this month and next get the "early/mid/late" descriptors even though they never shipped bi-weekly). In the case of X-Men, this shift coincided with the end of their summer bi-weekly shipping, making it look like the series published three issues a month for two months, even though it didn't.

A Work in Progress
Moira confirms that there is no presence of Malice lingering in Lorna. She also notes that Zaladane most likely was Lorna's sister, as that's the only way her power transfer could have worked. Finally, it's established that Lorna's newfound strength and invulnerability is powered by some kind of energy she is absorbing, but Moira isn't sure yet what the energy is. 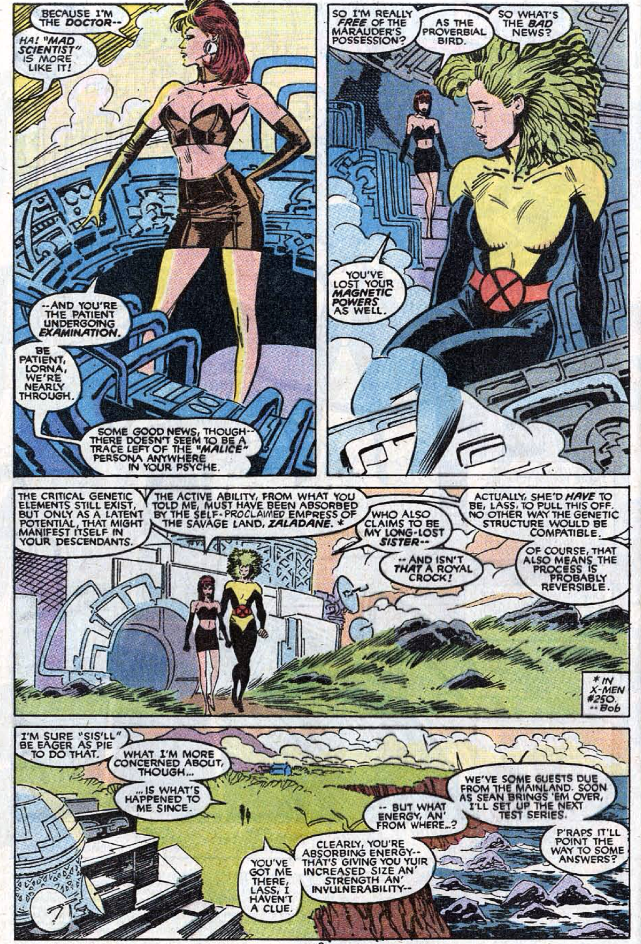 Alysande Stuart has a past with Banshee, from his pre-X-Men days.

Given that Amanda later teleports herself, Stuart and Banshee directly to Muir Island, I'm not sure why Banshee is picking up the women via boat in the first place.

I Love the 80s
Tom Corsi compares himself to action stars/characters (Bruce) Willis, (Mel) Gibson and Rambo, while the Reavers reference A Fish Called Wanda. 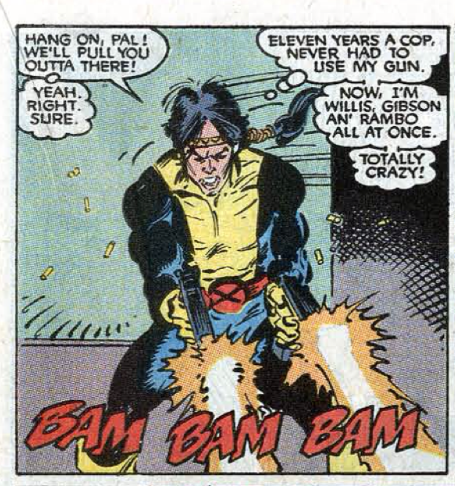 Artistic Achievements
Sunder appears to die  early in this issue, then pops up again at the very end (shortly before dying again, and for reals this time), saying his armor protected him. However, he is only ever depicted wearing his regular clothes and not the protective X-uniform. 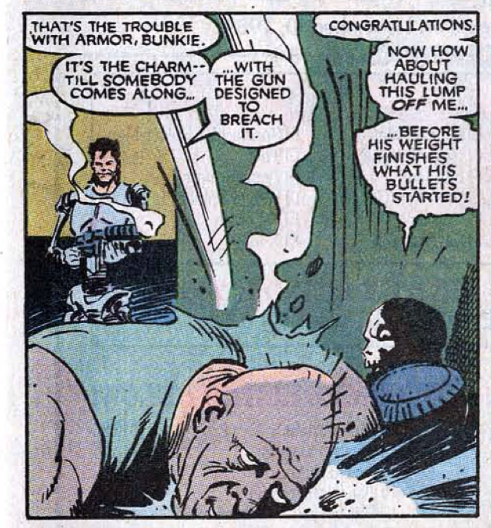 Teebore's Take
The "rebirth" side of "Dissolution and Rebirth" essentially begins here, as we get our first look at a "traditional" replacement for the dissolved Outback X-Men via the Muir Island X-Men, in a story that also kicks off the two-part finale to the overall arc, as the Reavers attack Muir Island. The Muir Island X-Men never quite become the formal replacement for the X-Men suggested by this cover and the new X-uniforms they don, but here and in later appearances there's definitely something fun in seeing so many long-forgotten or ignored supporting characters get a chance in the spotlight. Of all the various groups of characters who take the lead at various times in the upcoming "no team" era of the book, the Muir Island X-Men comes the closest to feeling like the "Legion of Substitute X-Men", an inherently fun concept (which was previously teased in the Doom/Arcade story circa issues #145-147) for the way it suggests a "what if/what also?" approach to the team while putting characters who usually hang out on the sidelines into the game.

Next Issue
Tomorrow, Technet takes the stage in Excalibur #15. Friday, Wolverine gets a visit from an old friend in Wolverine #17. Next week, more Reaver madness in Uncanny X-Men #255.