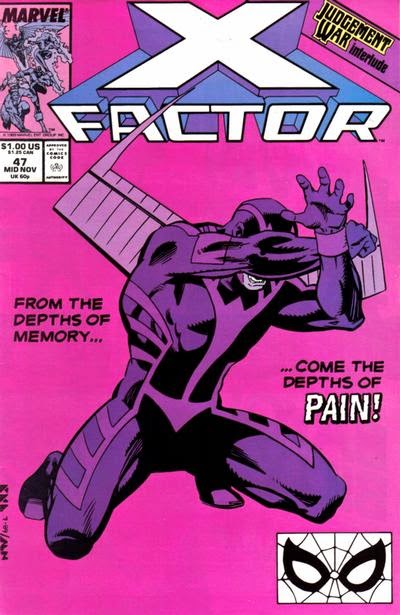 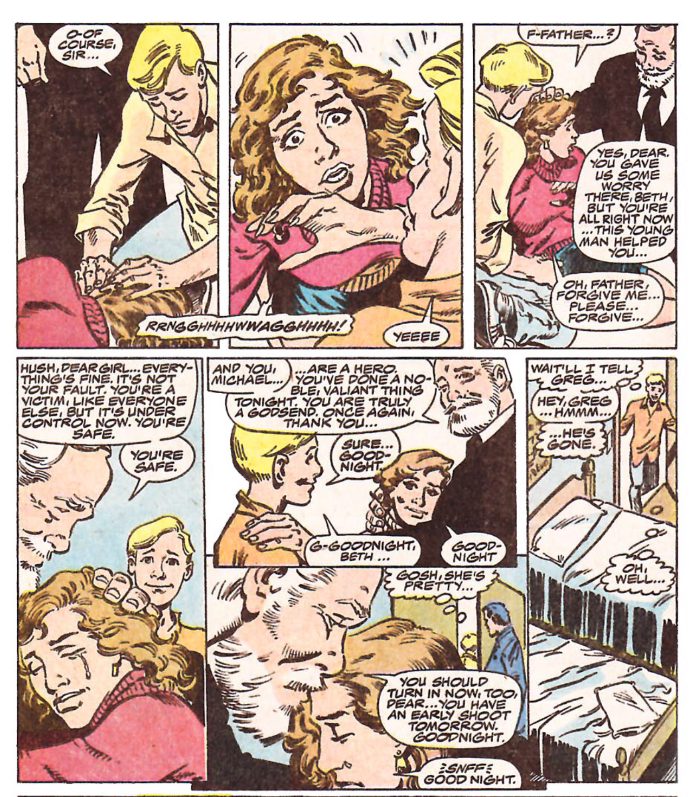 Meanwhile, Archangel busts up a drug deal involving kids from the church, but is shocked to learn it's the kids doing the dealing. Later, Michael's roommate Greg shows him a video featuring Beth, which freaks him out, just as he's called on again to tend to Beth, who tried to run away once more. This time, Father Phillip asks Michael to use his power to hurt Beth. But Michael is unable to do so, and as he silently prays for help, Archangel bursts into the church, dispatching the armed goons and staring down the super-powered kids. Phillip telepathically attacks Archangel through his fears, but Beth, a telepath herself, does the same thing to Phillip, saving Archangel. Later, Phillip is taken away by the police, while the rest of the kids go their separate ways, with Phillip and Beth turning down an offer to live with X-Factor in order to stay in the city and help other people.

Firsts and Other Notables
The Dreaded Deadline Doom hits X-Factor, and much like New Mutants #81, it couldn't have come at a worse time, landing right in the midst of a long, ongoing storyline. There's a one page intro that suggests Archangel is recalling these events while awaiting his next battle in the Chosen arena, but otherwise, nothing from the "Judgment War" is involved.

The story is written and drawn by Kieron Dwyer, one-time stepson of John Byrne, who also contributed new pages to the Classic X-Men reprints early in that series' run.

The Chronology Corner
The central flashback story in this issue takes place either between X-Factor #40 and #41 (per Marvel Chronology Project) or between issues #42 and #43 (per UncannyX-Men.net). There really isn't anything in it that suggests one placement over the other, other than being after "Inferno" and before "Judgement War".

A Work in Progress
A few flashback pages gives us a glimpse of Archangel's past, most of which are consistent with wha we've seen before (including the "dressed as angel to rescue kids from his burning school" bit from the Silver Age backup story). 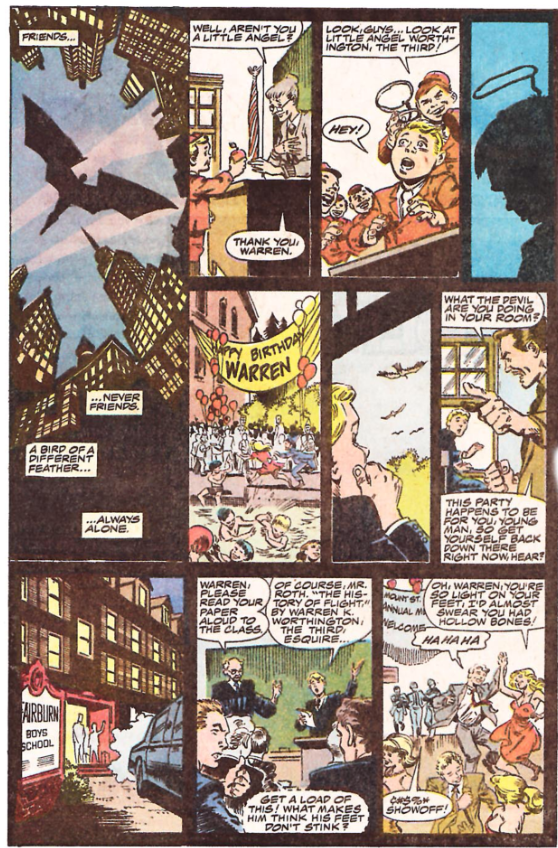 We also see a young Cameron Hodge, whom Warren helped against bullies, with the present day Archangel bitterly regretting his friendship with him. 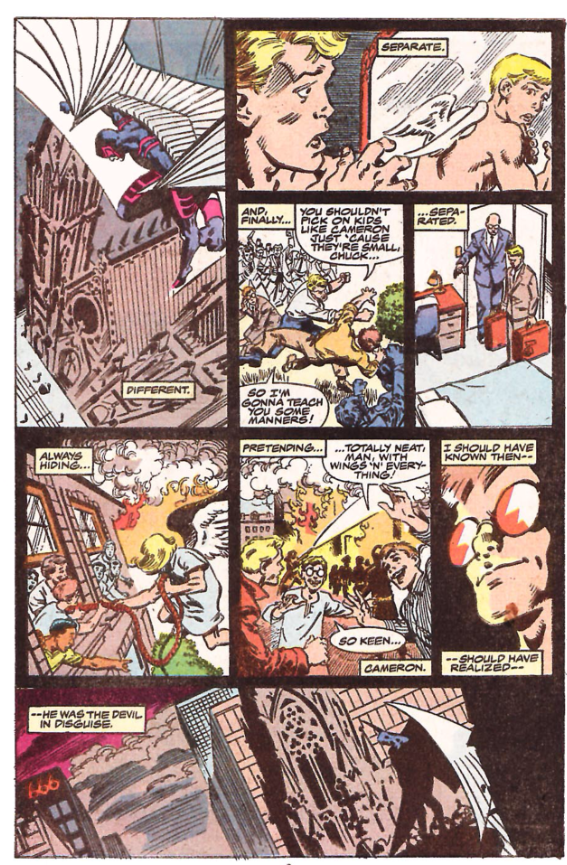 Archangel notes that when he was a kid, good and evil were easier to distinguish, especially now that Magneto was teaching the New Mutants and the Brotherhood of Evil Mutants were federal agents. 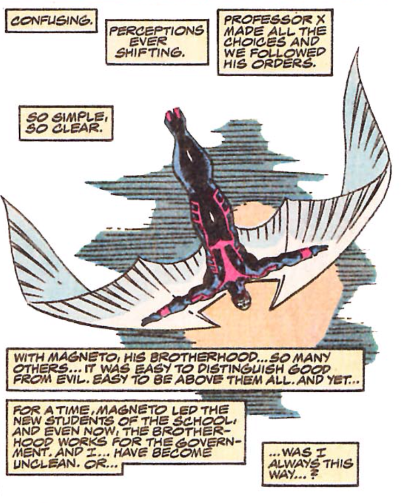 I Love the 80s
The super-powered kids at the shelter are all given code names for one panel. 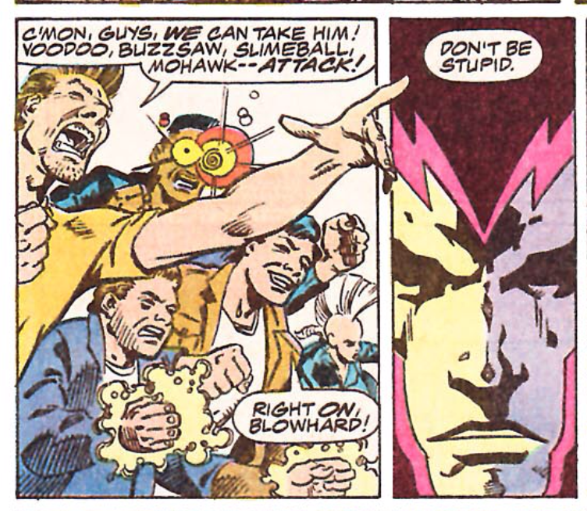 Artistic Achievements
There's a pretty nifty one page spread towards the end of the age, drawn like a stained glass window, showing Archangel surrounding by the past and present X-Factor on one side and his two most notable foes, Apocalypse and Hodge, on the other. 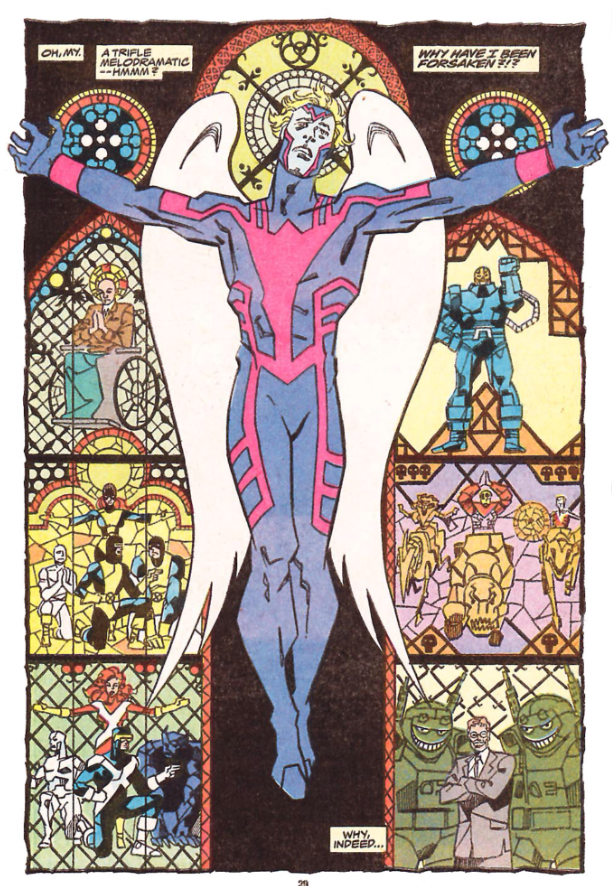 Teebore's Take
Like New Mutants #81 before it, the timing of this issue does it no favors, landing as it does in the midst of an ongoing storyline that was just starting to feel a bit long in the tooth even before it got derailed by a completely disconnected fill-in issue. Removed from that context, the story here is...fine. It's the kind of standard "innocent youth gets taken in by an amoral authority figure in the big city before an encounter with a superhero gives him/her the strength to escape" routine that was oh so common in the 80s (I imagine that a lot of Cloak & Dagger stories fit this template), and it's a perfectly cromulent example of that kind of story, even if most of the elements (the lone damsel in distress amongst the youths, the Artful Dodger-esque jaded companion, the creepy authority figure) were already pretty cliche even in 1989 (the implication that Beth was participating in porn for Father Phillip certainly stood out, as I wouldn't have expected to see even the implication of that in a mainstream Marvel comic in 1989, even if it is, sadly, more cliche nowadays).

Dwyer tries to thematically tie Archangel to the group of kids via the concept of secret fears and the religious imagery inherent in Archangel's name/look, but the effort mostly just results in a bunch of overwritten narrative captions (and one admittedly cool splash page). At the end of the day, any member of X-Factor (or any superhero, really) could have been the protagonist of this story. As a backup in an annual or Marvel Comics Present, this would be a perfectly inoffensive, if inessential tale. Landing as it does in the midst of the larger and completely disconnected "Judgment War" arc, it's just a complete waste of time.