I didn't get a chance to watch last night's Community yet, so that'll have to wait til next week, unfortunately. But here's what I did find time to watch. 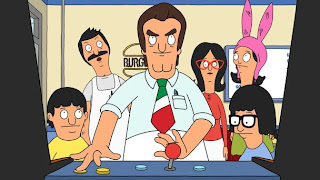 A marvelous episode, one of the show's best, which gave everyone something to do and highlighted the show's strengths. From Bob's "peeing race" with Jimmy Pesto to his wrist braces ("Please tell me they shoot webs!") to a fantastic guest appearance by Aziz Ansari as DRL to Linda's random obsession with sailing which dovetailed perfectly into the episode's climax and finally the great 8-bit style closing credits, this episode was pretty much a laugh a minute, and perfectly showcased the show's whacky, crazy, hilarious world.

Louise: He had sex then we happened. Deal with it!


Family Guy: You Can't Do that on Television, Peter 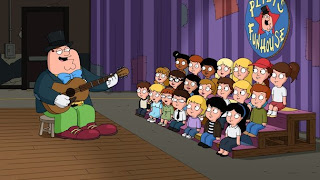 While I appreciated the way the A and B plots came together in the end (something that doesn't often happen on Family Guy), neither plot was terribly exciting. Peter's children's show lacked a strong concept on which to hang jokes, and his confrontation with Lois was pretty standard stuff (I did appreciate the sheer randomness of doing "Who's on First?" with a puma, though). The typical Meg jokes aside, the B plot worked a little better, mainly because I enjoyed how utterly inept Dr. Hartman was, but in the end, this was a pretty unremarkable episode. I certainly laughed a few times (I also liked the Evite cutaway gag), but there wasn't much here to get too excited about.


American Dad: The Kidney Stays in the Picture 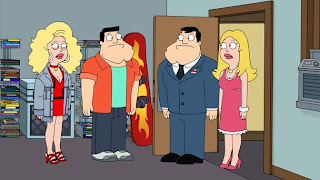 AD once again goes for heartfelt, and thanks to a hilarious third act involving time travel, manages to be pretty damn funny as well. This show has gone to the time travel well before, usually with good results, and this episode is no exception, allowing Stan and Francine to interact with their younger selves ("I should have just said like Back to the Future") as well as the Roger of 1996 (which sets up the great payoff at the end of the episode). Along the way, Stan asserts his love for Haley, regardless of whether she's his biological daughter, and I appreciated that the show didn't undercut the sentiment by revealing, either to us or Stan, whether he actually was Haley's father.

Other Thoughts
Setting the time travel in 1996 means that in the present Haley can only be, at most, sixteen, despite being married (and Jeff was seen at her bedside in the hospital) and drinking at the bar with Francine. I have to think the writers realized this and decided their 90s-era jokes were worth the continuity headaches, but as much as I enjoyed some of the gags, I don't know that they were (the best jokes from the time travel sequence had little to do with the 90s setting).

The disconnect between Stan's words and his body language was a pretty funny gag ("You big whore. I don’t know why I’m holding you like this. It must be very confusing."). I also enjoyed the not-so-super computer ("Up... updating iTunes").


Once Upon a Time: The Stable Boy 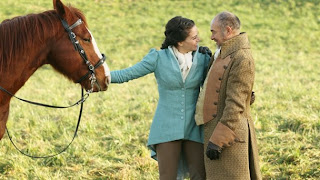 Another very good episode that finally answers the question of what Snow did to make Regina hate her so much. I'm of two minds regarding the reveal: on the one hand, I think it works very well, tying it in with the show's overarching thoughts regarding the importance of love, and fitting in nicely with the characteristics/previous actions of the characters involved (ie it had to be something Snow did innocently and without ever knowing she'd done it). On the other hand, this episode offers no good explanation for why Regina pins all the blame on Snow, instead of, at the least, splitting it between Snow and her mother and at best, forgiving a young girl an innocent mistake and taking revenge on the person who, you know, literally ripped out the heart of her lover. Hopefully, we'll get another episode that depicts the fate of Regina's mother, and offers a possible explanation for why Regina continues to hate a woman for an innocent and well-intentioned mistake she made as a child.

Other Thoughts
As little sense as it made, considering her mother was still around, the moment where Regina realizes what Snow did and sucks in her fury, becoming in a moment the Regina we know, was a great bit of acting from Lana Parilla.

Similarly, the casting department knocked it out of the park with the girl who played young Snow.

Regina mentioned that once her mother was simply the daughter of a miller; I believe that in most tellings of the Rumpelstiltskin story, it is the miller's daughter whom Rumpelstiltskin helps spin straw into gold.

I enjoyed the chemistry between Emma and Mysteriously Sexy Writer. I'm not sure if they're setting up a romance between them, but I wouldn't mind it.

Katherine is back, which is exciting mainly because it (hopefully) means the end of the "Mary Margaret: Murderer!" storyline.

Flashing back and showing us that framing Mary Margaret was Mr. Gold's idea was intriguing (and a nice stylistic choice). I'm as curious as ever to learn what game he's playing.


Game of Thrones: The North Remembers 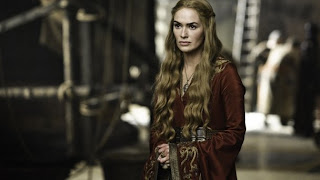 Thanks to my brother's prodding and the recent Blu-ray release of season one, Mrs. Teebore and I powered through the first season of HBO's excellent Game of Thrones over the last month or so, and enjoyed it so much that we actually signed up for HBO so we wouldn't have to wait another year to catch up with the various antics of the denizens of Westeros (well, that, and for Aaron Sorkin's upcoming HBO series about the behind-the-scenes goings on at a CNN-like news network, which sounds pretty much like the show he really wanted to make when he was making Studio 60, because I am a huge Aaron Sorkin nerd). As such, I'm going to take a stab at covering the show each week in this post, in part because at least one of you specifically asked for it and I know a few more regular readers that watch it as well. And because, well, I will be watching it every week.

However, this is a tricky show to write about, for a variety of reasons. First of all, there's the names, which in true fantasy fashion are, the random "Ned's" and "Robb's" aside, ridiculously complicated. Then there's the fact that, at least in its first season, this show was pretty much just a ten hour movie doled out an hour at a time; where other shows, even heavily serialized ones like Lost, would have an episodic focus on a specific character or theme, even while many varied plots occurred, GoT pretty much just tells the next chapter of its story each week. This makes writing anything about the show on an episode-by-episode basis that isn't a straight up recap challenging. But I'll see what I can do.

"The North Remembers" picks up more or less right where the first season ended; we are reminded of what a cruel twit Joffrey is, before touching base with several of the popping-up-like-mad contenders for the crown: Robb in the north, Daenerys in the Eastern dessert, and mentioned-but-never seen Stannis at the new location of Dragonstone. If you wanted to pick a theme for the episode, it would be about the nature of leadership, as the tyrannical Joffrey is contrasted with Bran learning to listen to his subjects, no matter how inane their concerns, while Jon Snow receives a similar lesson north of the Wall. And in one of the episode's best scenes, Cersei comments on the nature of leadership with a show of force against Baelish, underscoring her belief that "power is power." Finally, we see that power put to use, as the episode ends with a chilling montage depicting the the execution of Robert's various bastards.

Other Thoughts
I've yet to read the series of books on which the show is based, so I'm coming to the show completely cold. I plan to read at least Game of Thrones sometime this summer, but will probably wait to read subsequent books until their seasons have concluded.

Peter Dinklage receives top billing in the credits, with Tyrion clearly being positioned as the closest thing a large ensemble cast like this has to a main character.

The new location of Dragonstone was added to the opening credits, and while we have yet to see much of him, I enjoyed Stannis' editing his letter decrying Joffrey's claim to the throne.

In the first season, the divide between those who worshiped the old gods and the ones who worshiped the new seemed fairly benign; that appears to be changing, with Stannis and Melisandre's religion being more aggressive and less tolerant of other faiths.

For the first time, we got a nice sense of the scale of a full grown direwolf. That was pretty cool.

Tyrion: We looked for you on the battlefield, and you were nowhere to be found.
Joffrey: I’ve been here, ruling the kingdoms!
Tyrion: And what a fine job you’ve done.

Tyrion: You love your children. It’s your one redeeming quality. That and your cheekbones.
Newer Post Older Post Home
Posted by Austin Gorton at 8:00 AM