Hey, I'm back! I say that for almost every post...probably says something about the frequency of my posts. But it's not my fault, it's Skyrim's.
Anyway, I'm doing some more rankings and we're getting very close to shows I'd recommend! In fact, some of these I would recommend...to the right people. 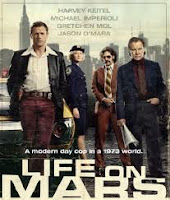 30. Life On Mars: I should note that I'm referring to the American version, not the British version. This series is about a detective from the 2000's who ends up in the 1970's. How and why he ended up there (or is it all a dream!) is the crux of this show's mystery.
So you have the Lost-esque mystery of the time travel mixed with a police procedural mixed with a fish-out-of-water scenario. (Apparently, much to the surprise of the main character...and me, in the 70's search warrants, police brutality, Miranda rights and due process are all things cops don't have to worry about. It's the 70's man, you're guilty if the police say your are!)

Anyway, the episodic police procedural cases were actually rather engrossing. But the strength of this show came from its superb acting. Due to its rather ridiculous premise this show could have gone off the rails quickly but the actors sold every scene and kept me watching.
Unfortunately, the mysteries on this show left a lot to be desired. Of course, the mystery is the part of the show I would have liked to be the best. But it wasn't. So, while the show was interesting, I couldn't recommend it.

29. Drive: Those four episodes were really good. I mean it!

28. Witch Hunter Robin: Robin is a woman with special powers who works for a secret government organization that hunts down other people with special powers whose powers have gone out of control. (You'll be shocked to learn that those people are labeled "witches.") But, does this secret government organization have ulterior motives? And, as person with powers herself, how long will it be before Robin is no longer a hunter and becomes one of the hunted!? Alright, it's not the most original premise in the world, but this was an enjoyable anime.
The show starts off as "villain of the week" but it ends up having a rather intriguing overarching story. It was interesting enough. As a matter of fact, I'd say it's worth checking out.

27. Mobile Suit Gundam Wing: Giant robots battling, intergalactic space politics, long drawn out philosophical debates about the morality of war...what's not to like? It's been a while since I've seen this series but, as I recall, the plot gets a little confusing. Refreshing myself on it has only further confused me.
All I can say for sure is I had no business liking this series as much as I did. But I really did enjoy it. Maybe it was a right time, right place scenario? I was in college and something about giant robots wailing on each other combined with people waxing philosophical about humanity's propensity for violence really resonated with me. In some ways, it still does.

26. Outlaw Star: A space opera involving a gun for hire who winds up captaining a stolen prototype space ship that is designed to navigate to the nexus of the universe filled with treasure, knowledge and power. (Naturally, the ship also contained a rather attractive humanesque female "bioandroid" as a part of its cargo.) So, the crew of the Outlaw Star travel around the galaxy getting into all sorts of misadventures.
I certainly enjoyed this series but the universe of Outlaw Star has magic in it. For whatever reason, sometimes mixing magic with science fiction can weird me out. (But sometimes it doesn't...I'm don't know what the rules are for when I like it and when I don't and I probably never will. Trying to figure out my psyche is a fool's errand.) Anyway, even if it was a little weird to me I didn't mind it too much in this series because I think it fit with the style of the show.
Aside from that, I thought this show was a lot of fun. However, in refreshing myself on the series I was reminded that the version I saw (on Cartoon Network) was heavily edited to filter out nudity and other adult suggestive themes. So now I just feel like I've been missing out.

Up next time: An adult American animated series, a time traveler, a show seemingly made just for me and, of course, more anime.
Newer Post Older Post Home
Posted by Dr. Bitz at 2:16 AM