Happy Halloween, everyone! I watched a ton of Halloween-themed shows yesterday, and am planning on more tonight, so we'll have a nice post-Halloween rundown of those next Monday (it'll be just like the old "Treehouse of Horror" episodes that aired well after Halloween!).

In the meantime, here's thoughts on what I watched last week.

Once Upon a Time: Pilot (series premiere) 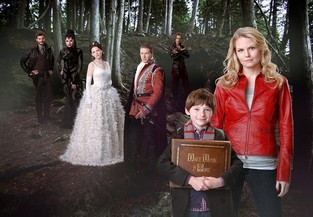 I'm pretty much a sucker for anything that takes the archetypal fairy tale characters and casts them in a different light, whether it be the cleaned up animated versions found in classic Disney films or the more thrilling, exciting and adult stories that unfold in the pages of Fables (one of my favorite comic books). So I was pretty psyched to see two "fairy tale characters in the modern world" TV shows set to debut this fall (thus making the odds better that at least one will be watchable and will stick around). Once Upon a Time was the first of the shows to launch (we'll discuss Grimm in next week's post), and it was pretty good, at least at first glance.

Much of my appreciation for this episode came from Henry, the given-up-for-adoption son of Jennifer Morrison's Emma, who did a nice job of interjecting some humor into the proceedings and laying out the plot in a way that seemed less expository than it could have been. The pilot was also surprisingly restrained, to its betterment. I was fully expecting the episode to end with Emma and the Evil Queen facing off, prepared to do battle with one another for the fate of the inhabitants of Storybrook. That's obviously where we're headed, but taking some time to get there will be for the best (I also appreciated that the episode didn't spell out for the audience the fact that Emma is sticking around because she knows the Queen was lying when she said she loved Henry). By the end, the pilot did it's job: we know what the narrative arc will be, but we don't know how it will come to pass, and the characters are at least initially intriguing enough to make the finding out enjoyable.

Other Thoughts
Person of Interest has received a lot of comparisons to Lost so far this season, due to the involvement of Michael Emerson and JJ Abrams, but this show (whose two showrunners, Adam Horowitz and Edward Kitsis, are former Lost writers), in addition to having a seemingly limited narrative (waking up Storybrook/getting off the island) and cutting between the present day and fairy tale flashbacks like the old flashbacks/forwards/sideways of Lost (a device which the show will apparently continue to use) featured several minor allusions to Lost in this episode as well, from the clock in Storybrook being stuck at 8:15 to the Queen's address being 108 to a post-commercial scene opening on a closeup of Emma's eye opening.

If Henry is Emma's son, born outside Storybrook then taken in it, has he always known the truth about the town? Or did he realize it recently? If so, what triggered his realization?

In terms of the fairy tale characters, Snow and the Prince were pretty blah (they are generally pretty blase characters, Fables aside) so I'm hoping they get some added depth in future flashbacks. I also hope we get a better idea of the Queen's motivations beyond "she's evil". And Robert Carlyle's Rumpelstiltskin was as fun as I'd heard. 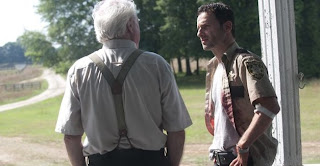 There's been a lot of talk about how much like Lost (in this post and elsewhere) the first episode of Once Upon a Time was, but this episode was also very Lost-esque, at least, first season Lost. The plot of the episode is driven by the desperate race to save Carl despite a relative lack of supplies and expertise, and it felt very much like something you'd see in the early episode of Lost, that "oh shit, how are they going to get out of this one?" feeling that came from a setting which lacked access to the modern conveniences we take for granted. Just as on Lost, when you'd think, "well, at least Jack is a doctor" and then something would happen that was far beyond the capabilities of a doctor with no supplies, this episode offers the relief of "at least Carl got shot near a medical professional with access to some medical supplies" followed by the realization that in order to save Carl, it's going to take a lot more stuff than what's on hand.

Through it all, Rick looks positively exhausted, and Andrew Lincoln sells the hell out of it. For all his grief over what's happened to his son, and all the blood that's been drained out of him (another allusion to Lost; Jack pouring his blood into Boone), you get the sense that he's just wiped out from everything that has happened since he woke up from his coma: the zombie apocalypse, the struggle to survive, the strain of leadership, the CDC blowing up, losing Sophia, and now Carl. It's only the second episode of the season, but you have to wonder: how much more can he take?

Other Thoughts
It's very clear that this is going to be a very decompressed show. Last episode, we were told Rick and company are headed towards Fort Benning, suggesting the overall narrative of the season. An episode later, Sophia is still missing, the group is still split up, and with Carl unlikely to recover anytime soon, it seems like the first step on that journey is going to take a good long while.

For a moment there, I thought T-Dog might become deliriously meta, and reference how rarely in movies the black guy survives situations like that in which he's found himself, but it was still a good scene, if just for more of Dale's "I don't care how crazy the world is, I'm going to treat every situation as normally as possible" awesomeness.

I was really expecting Sophia to have been found by the people at the farm; where the hell is she?

More good stuff from Daryl (his "shut up" and casual dismissal of the zombie, pulling out a bag of meds) but the vet's daughter was a lot of fun too, charging in, whomping the zombie upside the head, grabbing Laurie and heading back in all of 30 seconds. I'd like to see more of her.

The farm is an interesting new setting (and for all my desire to see a long term narrative unfold, I get the feeling we'll be there for awhile) but I do wonder how it's managed to survive intact. They don't seem to have any tighter of a perimeter than the old RV camp outside of Atlanta did, and "off the beaten path-ness" only goes so far (they're can't be that far from a highway where a massive herd of zombies just passed by, and we saw Rick come across a similarly isolated farmhouse in the pilot, and it was much worse for wear). At first, I was waiting for the other shoe to drop, to find out this group was actually evil or something, until I remembered that you can't really cut a morally dubious deal with zombies...


How I Met Your Mother: Noretta 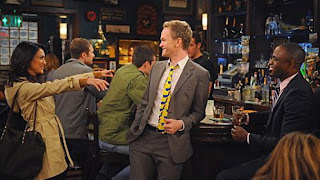 This was an episode with an interesting premise (exploring the idea that everyone, to a certain extent, ends up with someone resembling one of their parents) but a poor execution of that premise. I guess on paper the idea of having the characters parents show up as hallucinations seemed like a good idea, but in the end, we were left with Marshall's dad trying to kiss him, which, aside from being kinda icky, did a great disservice to all the stuff Marshall went through last season whilst grieving his dad. It was a gag that ultimately abandoned characterization for the sake of a laugh, and those kinds of gags can work if the laughs are big enough. But in this case, they really weren't.

The B-plot, dealing with Robin and Ted's friendship and Ted's relative pathetic-ness, was much better. In light of Victoria's assertions earlier in the season, it was nice to see the writers avoid going down the "Robin still has feelings for Ted" road and having Kal Penn ultimately recognize that Ted and Robin just have an unique and oddly-close friendship. Plus, Weird Al! Yay!

Barney: We decided to wait until she decides to have sex with me. 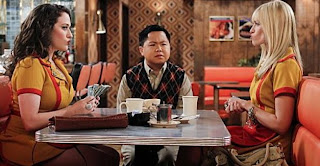 Just last week I expressed some hope that the show would develop Max and Caroline's co-workers at the diner from caricatures to actual characters, and this was a step in the right direction, with both Han and Garrett Morris being given material to play beyond their stereotypes (Oleg was pretty much the same, but the fact that he had a date suggests there's SOMETHING more to this character than sexual harassment). It's not perfect, but this show is gradually getting better, so at least it's going in the right direction (it's also worth noting we haven't been back to Max's uptown nanny job in awhile, and the show is better for it). 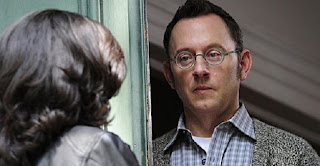 This was probably the best episode of the show yet, despite a lack of mythology and a case very similar to the previous episode (trying to stop a good person from doing a bad thing). It succeeds on the strength of the two scenes at the end of the episode, the first with Reese and the doctor at the diner and the second open ended one with the rapist that closes out the episode. It's rare to see a procedural end without tying things up in a neat little package; if this is a sign that this show is willing to play with those expectations (and not just a one off thing), things could be getting better. Incidentally, this was also the first episode where I didn't find myself pretending Reese was Batman, another testament to the strength of the episode.

Other Thoughts
The scene between Finch and Detective Carter was also very good, mainly because Michael Emerson is very good at playing characters who lie very well. But man, if Finch WAS telling the truth about just being a paralegal scared out of his mind, Carter would have come across as one cold SOB, and frankly, she had very little reason to suspect Finch of lying.

Despite the ending, this is still a procedural on CBS so the writers feel compelled to point things out to us like we're all dullards; here, it was Finch making it very clear that the doctor's sister killed herself. He makes the most of the line, but still.

How come the Machine spit out the doctor's SSN and not the rapist's (her intended victim)?
Newer Post Older Post Home
Posted by Austin Gorton at 8:00 AM