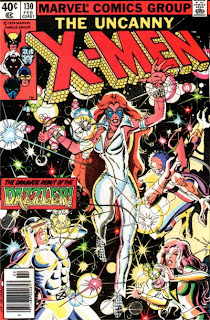 In a Nutshell
The debut of Dazzler.

Plot
Cyclops, Phoenix and Nightcrawler arrive in a seedy New York neighborhood in search of the second recently-detected new mutant. Leaving Nightcrawler to keep watch outside, Cyclops and Phoenix enter a rundown disco, not knowing they are being watched by the Hellfire Club. As they search the disco for the new mutant, the Hellfire Club mercenaries check in with Sebastian Shaw and Jason Wyngarde, members of the club's secret Inner Circle. Wyngarde departs for the disco while Shaw checks in with the White Queen in Chicago. White Queen reveals that she has captured Professor X and has Wolverine, Storm and Colossus locked in power-inhibiting cages. Unknown to her, the stowed-away Kitty Pryde phases into the room, and manages to awaken Storm. She gives Kitty a number to reach the other X-Men, and, discovered, Kitty flees, using her power to dive through the floor and escape a pair of guards. 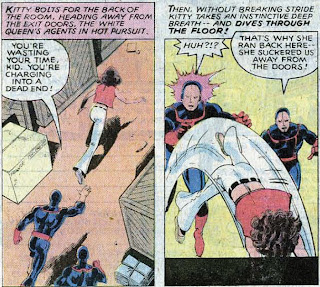 Back at the disco, Phoenix bumps into Jason Wyngarde, and suddenly finds herself back in the 18th century once again, where she is about to marry to Wyngarde. Following the ceremony, Wyngarde announces Phoenix as the Black Queen of the Hellfire Club and passionately embraces her, an embrace that is echoed in reality, much to Cyclops' shock. Just as a startled Phoenix attempts to explain, they are interrupted by the arrival on stage of the main act, a woman named Dazzler who creates her own fantastic lights and the new mutant for which they've been searching. Outside, Nightcrawler answers the phone in the X-Men's car and hears Kitty's urgent plea for help, just as an armored Hellfire Club mercenary attacks him. Two more burst into the club, attacking Cyclops and Phoenix, but with Dazzler's help, they are able to defeat their armored foes. Nightcrawler tells Cyclops that the X-Men in Chicago have been captured. Cyclops tells Dazzler she is a mutant and asks her to accompany them for her own safety, figuring she is safer with the X-Men than on her own. The four depart to rescue the other X-Men, driving past a laughing Jason Wyngarde.

Firsts and Other Notables
This is the first appearance of Dazzler (Alison Blaire), a mutant with the ability to convert sound into light energy. Shortly after this issue, she will receive her own series (which will run for nearly 40 issues) and, down the line, will end up joining the X-Men for an extended period of time before settling in as an off-and-on member of the team. 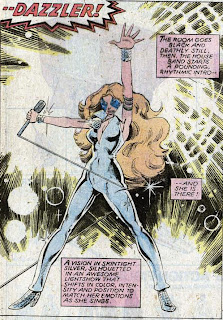 Dazzler has a fairly convoluted creation story, as she was born of a partnership between Marvel and Casablanca Records to cash in on the disco craze. Initially, Casablanca approached Marvel and said, "create a disco-themed comic book character, and we'll create a live disco act to match it". That idea was eventually scrapped in favor of an animated movie featuring the character-who-would-become Dazzler and all the artists under Casablanca's control, such as Cher, Donna Summers, and Kiss. Marvel EiC Jim Shooter even wrote the film treatment for it. The animated film was then scrapped in favor of a live action film (Bo Derek was attached to it at one point). Though Marvel held up their end of the bargain and introduced "the Disco Dazzler" in their comics, none of the other multimedia elements from Casablanca Records ever saw fruition. Brian Cronin's Comic Book Legends Revealed column has covered the origins of Dazzler in some detail; read more about it here, here, and here.

Dazzler's debut is notable for two other things. First, despite appearing in this issue, in the midst of their run, neither Claremont nor Byrne were involved in any way with the creation of the character; they were merely instructed to work her into the issue. Second, her later solo series was the very first comic book series to be sold exclusively to the direct market, that is, comic book specialty shops and not newsstands, drugstores, etc. (which were, at the time, the primary outlet for comic book books). Thus Dazzler's comic book series was a significant milestone in the history of the direct market that dominates the comic book industry today.

Sebastian Shaw, leader of the Hellfire Club, also makes his first full appearance in this issue (and has his first name revealed), after appearing in shadow last issue. The group of villains running the Hellfire Club are referred to as the "Inner Circle" for the first time, and the public face of the Hellfire Club itself is established, as "one of America's oldest, most exclusive gentlemen's clubs. It's membership list reads like a 'who's who' of the nation's social, political, and economical elite". 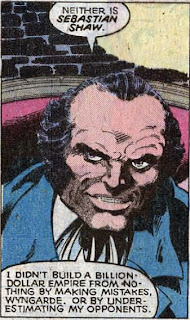 Jean experiences another time shift, finding herself back in the 18th Century and marrying Jason Wyngarde, after which she appears as the Black Queen of the Hellfire Club for the first time. 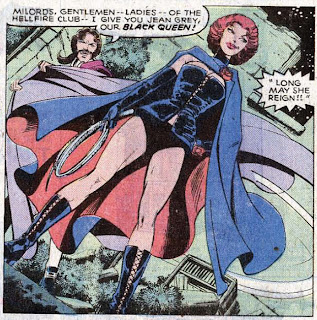 A Work in Progress
The X-Men's Rolls Royce returns, the very same one which once prevented them from receiving a welfare loan in order to fly to Europe to save Professor X! 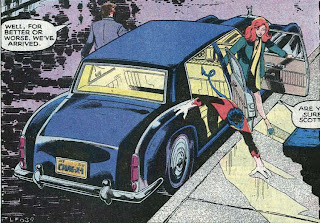 The Hellfire Club is revealed to be located on Fifth Avenue, just a few blocks down from Avengers Mansion. 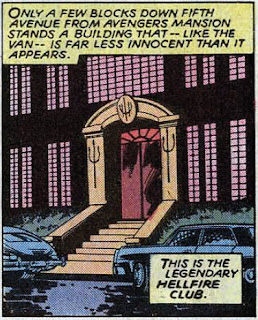 Having been stripped searched last issue, the underwear-clad X-Men are locked in cages with power inhibitors by the White Queen. Despite having searched Storm's costume for lockpicks, the Hellfire Club goons missed a sewn-in tag with the X-Men's phone number on it, which Storm gives to Kitty to call for help. 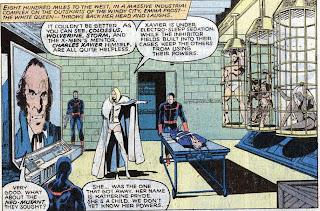 Professor X is shown to have been captured between issues.

Jason Wyngarde's seduction of Jean reaches a new level this issue, as her actions in the time shift begin to be reflected in real life. 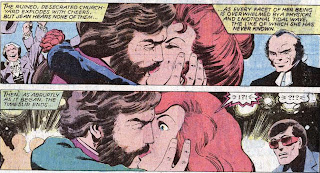 Once again, Wyngarde casts a unique shadow. It's noted that Cyclops subconsciously recognizes it, but won't realize it for some time. 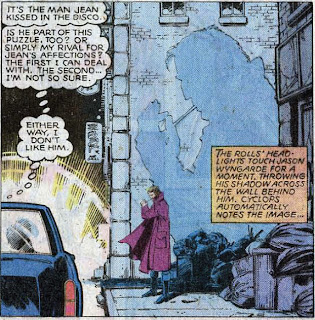 In this issue, Wyngarde is referred to as a member of the Inner Circle; it will later be revealed he is merely an applicant to that body and not an official member.

Dazzler bombards one of her opponents with so much light that he loses consciousness, a technique she refers to as "dazzling" him. I haven't read her ongoing series, but I'm fairly certain that specific technique is never used again when she pops back up in X-Men. 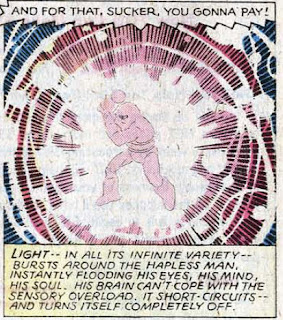 Once they've entered the noisy club, Phoenix establishes a telepathic rapport with Cyclops so they can communicate without speaking.

Phoenix picks up on a number of vile thoughts within the club, but part of herself  "almost finds those thoughts...attractive". 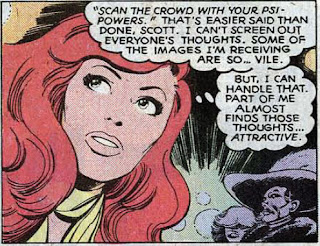 Cyclops has a mini Cerebro unit built into his watch.

As Phoenix telekinetically transform her and Cyclops' street clothes into their costumes, Cyclops marvels at her power level (it's also a nifty a way to get the X-Men into costume without having them take the time to change their clothes). 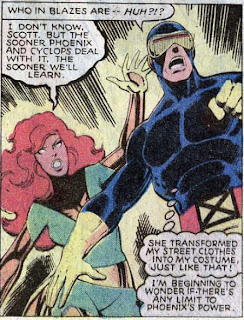 Once again, the Hellfire Club blows up its defeated goons.

The backup story in the Classic X-Men reprint of this issue features Moira attempting to clone her son, and offers an explanation from Banshee as to why he didn't call Moira in all those weeks between the end of the X-Men's "world tour" and their trip to Muir Island: apparently, the loss of his power left him so emasculated, he was reluctant to call Moira. It ain't great, but it's something, I guess...

That 70s Comic
Well, it's the first appearance of "the Disco Dazzler"; it doesn't get much more 70s that that...

Dazzler refers to the armored Hellfire Club goons as "refugees from 'Starship Troopers'".

Cyclops pulls that classic exposition trick to catch up readers of telling his teammates that they know something, then going on to explain to them exactly what it is they know.

Claremontisms
Cyclops' line, "is this where old discos go to die?" can be read as Claremont making a veiled reference to his feelings on the matter of being forced to shoehorn Marvel's "let's cash in on the success of disco!" character into the ongoing story. 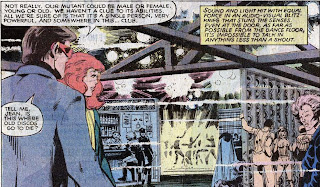 Artistic Achievements
At the disco, one of the background club goers serves as Byrne's take on the Joker.

For whatever reason, I've always liked this panel, where you get to see the goons inside the suits of armor still wearing their Hellfire Club mask.

"Professor Xavier is a Jerk!"
Cyclops notes that he's been edge since Professor X came back. 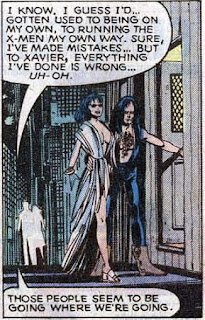 Later, Nightcrawler says that Professor X was furious when he learned Nightcrawler is no longer using his image inducer.

It's in the Mail
The letters column in this issue continues one of the first "we want to know more about Wolverine/leave Wolverine mysterious!" debates, and also calls for the end of his relationship with Jean, in light of the introduction of Mariko.

John Byrne on the creation of Dazzler
"...Marvel decided they needed a disco character to cash in on the then-current craze, and that, since mutants were deemed popular, she should be a mutant. So Dazzler got shoehorned into Kitty's intro, with Chris and I having absolutely nothing to do with her creation. (And with everyone being told to ignore the fact that there was already an X-Men villain -- the guy who murdered Warren's father, fer chrissake!! -- called "Dazzler".)"

Byrne, John."Did JB come up with the idea for the New Mutants?" Byrne Robotics. 5/16/2006 http://www.byrnerobotics.com/FAQ/listing.asp?ID=2&T1=Questions+about+Comic+Book+Projects#200

"I will forever have people coming up to me and saying, 'So, you created Dazzler, right?' No! No! Dazzler was stuck in the middle of a two-part story that had to become a three part story because of her. I created Kitty Pryde, whose story that was meant to be, but I had nothing to do with Dazzler."

Teebore's Take
Editorial edict forced Claremont and Byrne to work the introduction of Dazzler into their unfolding Dark Phoenix story, and once again their consummate skill and rapport at this stage of their collaboration makes the whole thing seem effortless (any indication that this wasn't part of their plan all along are fairly veiled) and, as Jason Powell discussed in his post on the issue, the edict actually has a fortuitous effect on the overall story. Initially, the first phase of the Hellfire Club's attack, featuring White Queen and Kitty, was only meant to last two issues, but the order to introduce Dazzler in #130 pushes that act of the larger story to three issues, thus making the entire Dark Phoenix saga last nine total issues, three acts of three issues each; a neat bit of symmetry.

Though Dazzler, a character created by a committee of comic book creators and record executives, born of a quickly dying fad, initially isn't the most dynamic or intriguing character, she will slowly evolve over time, and eventually Claremont will take an interest in her and work her into the book, thus bringing her full circle with her otherwise-commercially mandated first appearance in X-Men. And while she will never quite reach the heights of her contemporaries Kitty Pryde or White Queen, she's certainly not the worst character to debut in the pages of X-Men.

Next Issue
It's a psionic showdown as Phoenix faces off against the White Queen!
Newer Post Older Post Home
Posted by Austin Gorton at 8:00 AM