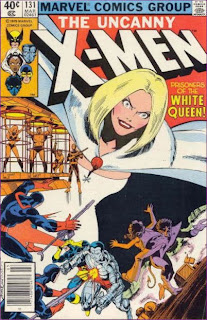 In a Nutshell
The X-Men battle the White Queen.

Plot
Kitty Pryde is being chased through a back alley in Chicago by a pair of Hellfire Club soldiers when Phoenix suddenly appears and destroys their car. Nightcrawler gets Kitty to safety, but frightened, Kitty runs away from him and hides inside a nearby building. Phoenix, tracking her telepathically and telekinetically changing into street clothes, finds the girl and calms her down. The X-Men, Kitty and Dazzler gather aboard the X-Men's skyship to plot their next move, and Cyclops asks Phoenix to read the mind of one of the Hellfire Club captives. She learns of White Queen's attack on the X-Men and the existence of the Hellfire Club, which startles her, as in her recent time slips she was married to a member of the Hellfire Club. With the information gathered from their captive and the help of Phoenix' power, the X-Men infiltrate the Frost Industries warehouse where their teammates are being held.

As White Queen prepares to psychically torture Storm, Kitty manages to free Wolverine but is attacked from behind, enraging Wolverine. The other X-Men and Dazzler storm the facility, engaging the Hellfire Club and freeing their teammates while Phoenix engages in a psychic duel with White Queen as Storm looks on. Their battle destroys the building around them, but Storm and Phoenix emerge unharmed. Professor X reveals he stayed out of the battle to observe his X-Men, and was impressed by what he saw. As the sun rises, the X-Men return Kitty to her parents. Professor X offers Dazzler a place with the X-Men, but she declines and heads back to New York. Kitty's father is irate over Kitty's unexplained absence until Phoenix mentally modifies his memories, an act which unsettles both Cyclops and Storm. The pair worriedly discuss Phoenix's growing dark side, and the fact that it seems like something or someone is manipulating that dark side into growing.

Firsts and Other Notables
It is revealed that when Kitty phases through something electrical, it causes the electronics to short out. The Statement of Ownership in this issue lists the average number of copies of each issue sold per month in the previous year as 171,091, with the single issue nearest to the filing date selling 166,017 copies. This is up significantly from the 115,260 (average) and 104,915 (single issue nearest filing date) reported a year ago in issue #120.

A Work in Progress
The X-Men are randomly flying some kind of skyship (maybe the other X-Men took the jet to Chicago?).

Phoenix now believes her time slips are a result of her psychically reliving the memories of an ancestor, and she is shocked to learn that the Hellfire Club is behind the recent attacks on the X-Men, as her "ancestor" in the time slips was a member.

This is the first mention of the legitimate face of the White Queen's criminal activities, Frost Enterprises.

Dazzler once again "dazzles" an opponent. 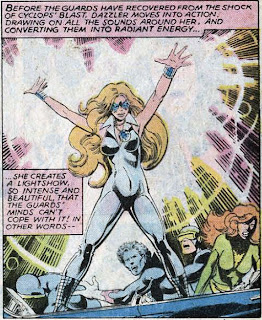 As Phoenix and White Queen battle, Storm notes that Phoenix is both beautiful and terrifying, and is reminded of Phoenix saving the universe inside the M'Kraan crystal.

Wolverine is shown to be protective of Kitty for the first time, though at this point it could be attributed to a general dislike towards kids getting shot in the back. 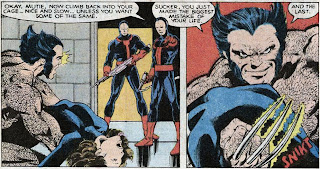 Cyclops spends most of this issue expressing concern (whilst kicking ass) at how powerful Phoenix has become, and at how easily she uses that power. 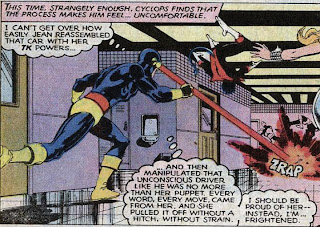 To smooth things over with Kitty's parents, Phoenix pulls a Professor X and modifies their memories telepathically, a move which concerns both Cyclops and Storm.

That 70s Comic
The Disco Dazzler heads into combat atop roller skates... 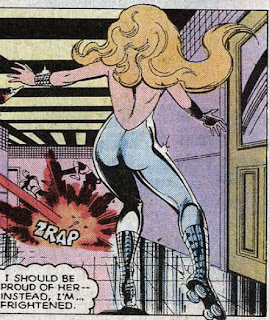 Artistic Achievements
Repeating his trick from issue #111, Nightcrawler rapidly teleports from goon to goon, knocking each out before the first hits the floor. This time, it's depicted with a neat image of Nightcrawler teleporting between the letters of his "bamf" sound effect.

"Professor Xavier is a Jerk!"
At the end of the issue, Professor X reveals that he spent the battle holding back and observing his X-Men, instead of, you know, lending a hand... 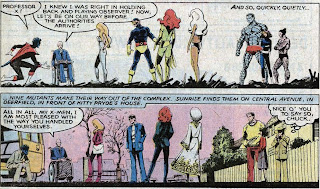 Human/Mutant Relations
One of the Hellfire Club goons calls Colossus a freak. Apparently he doesn't realize he's working for mutants... 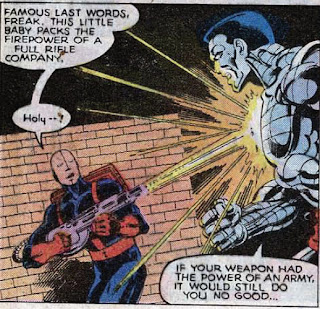 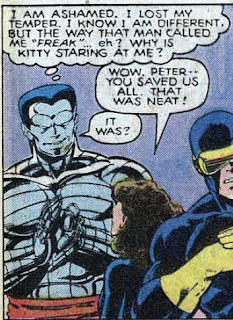 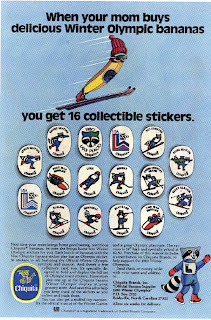 This issue features an ad for Epic Illustrated magazine, Marvel's first foray into crafting stores aimed specifically at adults and creating a place for creator owned work. It would eventually lead into the similarly adult-themed and creator owned Epic Comics line at Marvel, which would last into the 90s and experience a brief revival in the 00s. 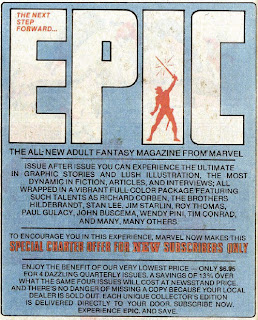 It's in the Mail
The editorial response to a letter regarding issue #125 in this issue confirms Scarlet Witch to be Magneto's daughter (or, technically, the daughter of Magneto's former wife). It also offers a sneak preview of upcoming stories: 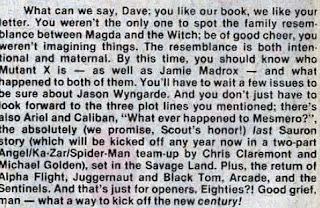 Of those stories, it's interesting to note the use of Kitty's first codename (Ariel) before it appeared in the comic, as well as a reference to Caliban, seventeen issues before he'll first appear. The Sauron/Savage Land/Spider-Man story referenced will eventually see print in Marvel Fanfare #1-4 (roughly two years from the publication of this issue). Arcade will return, but not Black Tom and Juggernaut (well, Juggernaut eventually...) I'm also fairly certain that the Mesmero story never actually came to be.

Chris Claremont on the comparison between Kitty Pryde and other child super-heroes
"I don't think there is any comparison. John [Byrne] created a 13-year-old mutant. I put her in Deerfield, Illinois. I said she had middle-class parents possibly getting a divorce. John contributed the visual on them, I threw in the dancing aspect of it and the genius aspect of it, and then for characterization I just looked at the 13-year-olds who live in my building, and Louise's [Simonson, eventual X-Men editor] 13-year-old daughter, Julie, and pooled all of their characterization and synthesized them for Kitty's. The idea was to make her a rounded person first and then worry about the super-hero aspect. The operative term was she had to be plucky. She had to be the kind of girl who, in spite of being scared stiff, would go into the lion's den, who, when given a mission by Cyclops, would not fail. Otherwise, what's the point of putting her in the X-Men?"

Teebore's Take
Act one of "The Dark Phoenix Saga" comes to a close with this issue, and in its way, it's very much a throwback. The heroes are triumphant, the villains are defeated, Professor X even takes a page from his Silver Age playbook and "observes" the team in battle rather than helping (of course, this also answers the question of why he doesn't just knock everyone out and be done with it, but at least it still has some grounding in logic, tying in as it does with the ongoing subplot of Xavier learning of what the new X-Men are capable).

But beneath the surface, the tension continues to build. Cyclops spends the issue concerned with the level of power Phoenix is exhibiting and how casually she is using it, culminating in her telepathically hoodwinking Carmen Pryde simply to make the X-Men's lives easier. Meanwhile, Storm has observed Phoenix's battle with the White Queen (a battle deliberately staged to mimic the Xavier/Farouk confrontation in issue #118, and perhaps we're meant to see Jean, despite being the hero, cast in the role of Farouk) and is reminded of the power she saw Jean wield inside the M'Kraan crystal. The issue closes with the pair worrying over Jean's growing dark side. Storm is reminding us that Phoenix is operating on cosmic levels while Cyclops is telling us she's no longer afraid to tap into her full potential, and together they make us realize that Jean's heroism, the greatest check on that power, may be comprised. It's clear that while round one may have gone to the X-Men, the game is far from over, and the Hellfire Club may not be the X-Men's biggest problem.

Next Issue
Scott and Jean make the most of an isolated butte, and the X-Men take the fight to the Hellfire Club.
Newer Post Older Post Home
Posted by Austin Gorton at 8:00 AM