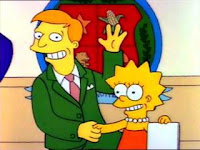 Or the One Where: The Simpsons go to Washington DC.

The Setup: After receiving a free copy of Reading Digest magazine, Homer becomes obsessed with it, culminating in Lisa entering an essay contest sponsored by the magazine and winning a trip for the family to DC.

Notable Notes: This is the first "The Simpsons are going to ___!" episode, a subset of episodes that, in over twenty years, has grown quite large and has been openly mocked by the show itself.

This was also the first episode in which "The Simpsons" used Dolby Digital Surround Sound.

At one point, Lisa corrects Congressman Arnold's assertion that there are quite a few female senators, saying there are actually just two. She is correct; at the time the episode aired, Nancy Landon Kassebaum of Kansas and Barbara Mikulski of Maryland were the only female senators.

In the wake of the episode's depiction of a corrupt Senator taking a bribe from a lobbyist for the timber industry, the show came under fire from a pro-timber group in Oregon, saying "Rather than approach this issue with genuine concern for Mother Earth, you took an easy shot at hard-working people whose only crime is to have been born in a timber town."

Matt Groening responded at one point, saying, "So now a few lumber companies have joined the nuclear power industry, right-wing preachers and high-ranking Republicans in attacking The Simpsons. We must be doing something right. I must point out The Simpsons is a cartoon show—not 60 Minutes. Later in the show, the same lobbyist proposed drilling for oil in Teddy Roosevelt's head at Mount Rushmore. Please don't tell the oil companies about this."

Favorite Lines:
Homer: Who would have guessed reading and writing would pay off!

Homer: Ooh, I love your magazine. My favorite section is `How to increase your word power'. That thing is really, really.. really.... good.

Jerry: In comes our logging company to thin out the clutter. It's all part of nature's, you know, cycle.
Congressman Arnold: Well, Jerry, you're a whale of a lobbyist, and I'd like to give you a logging permit, I would. But this isn't like burying toxic waste. People are going to notice those trees are gone. 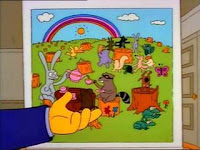 Lisa: Mr. Jefferson, my name is Lisa Simpson, and I have a problem.
Thomas Jefferson: I know your problem. The Lincoln Memorial was too crowded.
Lisa: Sorry, sir. It's just...
Jefferson: No one ever comes to see me. I don't blame them. I never did anything important. Just the Declaration of Independence, the Louisiana Purchase, the dumbwaiter...
Lisa: Uh, maybe I should be going. I've caught you at a bad time...
Jefferson: Wait! Please don't go. I get so lonely...

Trong: When my family arrived in this country four months ago, we spoke no English and had no money in our pockets. Today, we own a nationwide chain of wheel-balancing centers. Where else but in America, or possibly Canada, could our family find such opportunity? 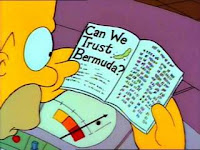 Teebore's Take: "The Simpsons" dive back into political satire (now on a national scale) with one of the show's best Lisa episodes, one which establishes her idealism and sense of social responsibility with a hilarious and knowing look at the corruption of Washington that, sadly, hasn't really dated at all. This has always been one of my favorite episodes (helped, in part, by the fact that it was another ep I never got recorded on VHS and thus enjoyed immensely whenever it re-aired), crammed full of great stuff, from Homer's uncharacteristic obsession with Reading Digest to Bart's very characteristic antics while traveling (messing with passengers on the airplane, pushing all the buttons in the Watergate Hotel elevator before exiting, setting up an early morning wake-up call for Homer) to Lisa's passionate and fervent idealism managing to transform Washington DC, for just a moment. This episode also has a ton of great visual gags, like the protestors outside the White House, or the artist depictions of Springfield Forest, or the "fat cats" in Washington getting portrayed as literal fat cats.

One of the strongest Lisa outings and the first (and one of the best) of many Simpsons vacation episodes. 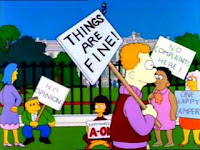