Aw, Hurley and Libby finally got their picnic. And this time, he remembered the blanket.
Libby's return didn't exactly tie up the lingering loose threads from her island story, but thanks to Desmond's new course of action, triggered by the events of the last episode, her appearance in the flash sideways was more significant than previous sideways returns. Add Hurley to the list of sideways characters whose eyes have been opened to the existence of the other reality. Where that's ultimately leading, what Desmond's ultimate goal is, remains unknown.

The inscrutably calm Island Desmond's mission remains equally enigmatic, and it's unclear whether everything is going according to plan or Desmond is just confident in seeing how things play out. If FLocke took Desmond out to that well with any doubt as to whether or not he was going to pitch him into it, Desmond's unflappable "what's the point of being afraid?" sure seemed to befuddle and anger ol' Smokey enough to make up his mind. What are the odds he helped put Desmond exactly where Desmond wanted to be?

Meanwhile, plenty of other stuff happened on the island, starting with Ilana pulling an Artz, continuing to the Black Rock's big goodbye, an answer to one of the show's oldest mysteries and ending with the enticing first meeting between Jack (who, after six seasons, seems to have FINALLY learned he can't fix everything) and FLocke. Questions still swirl around the recently departed Ilana: how, exactly did she train to protect the candidates? Why was she bandaged when Jacob visited her in the hospital? How did her relationship with him develop into one of father/daughter? While she may be gone, it seems, like many dead characters on Lost, that her story isn't quite over yet.

The dog Hurley is holding in one of the slides is his real life dog, who features prominently on Jorge Garcia's blog. 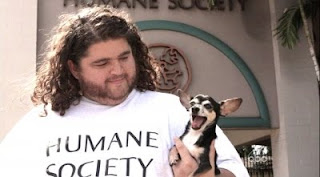 The internets tell me the Russian book Hurley found amongst Ilana's things was "Notes From The Underground" by Dostoevsky. The pouch was presumably the bag filled with Jacob's ashes. It's unclear if it will serve an additional purpose (other than giving Miles an opportunity to read Jacob's last thoughts), but it seems Hurley has them now.

Muppet Richard is back now that Hurley has wrecked his plan and shattered his calm sense of purpose by blowing up the Black Rock. With Richard ultimately off to Hydra Island and Ben along for the ride, Ben is unknowingly heading towards an encounter with Widmore, which should be interesting.

We got another look at the kid presumably haunting FLocke. He looked older to me in this episode, and I wasn't even sure if it was the same kid as the one who appeared in "The Subsititute", but both spectral children were played by the same actor. 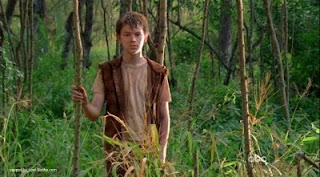 Desmond: “All women are a little bit crazy, bruthah.”

Senator Kelly was the doctor at Santa Rosa when Hurley was there in the Island reality as well. He even has the same island-y picture in his office. 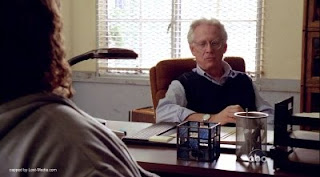 One of the patients in the rec room was playing Connect 4, just as Hurley played it with Leonard (who taught Hurley the numbers) in the Island reality.

Richard said that Jacob never tells anyone what to do, but he did tell Hurley to get Sayid and the others to the temple in "LA X", and he told him to bring Jack to the lighthouse in "Lighthouse". In death, it seems, Jacob is taking a slightly more hands on approach to things.

Maybe it's the HD, but the well FLocke chucked Desmond down looked like something out of a high school play. 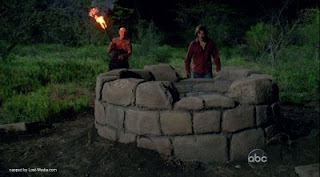 I liked how, when Sideways Ben asked Sideways Desmond about his kid, he responded effortlessly, as though Lil' Charlie is as much a son to him now as to Island Desmond.

Questions Answered
The Whispers are the voices of the people who have died but are still bound to the island as penance. So the island IS purgatory (for some, at least).

It's still unclear as to why the whispers whisper when they do/why we aren't ALWAYS hearing whispers whenever anyone is in the jungle, but I suppose we can chalk that up to dramatic effect.The whispers also seemed to usually precede an appearance by the Others (such as in "LA X", when the whispering started shortly before the Dogen group grabbed Jack and company). Someone suggested that perhaps in those cases, the whispers are trying to futilely warn the Losties of the Others' approach? 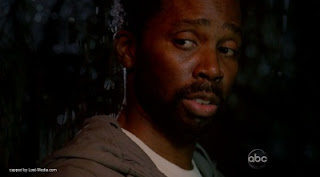 I feel like somewhere in Sideways Libby's explanation of her stay in the mental hospital is an explanation for why Island Libby was there as well, but I can't quite connect the dots. Maybe I'm just desperately reaching...

We can probably assume the answer to why Ghost Libby never came to talk to Hurley is because she's not stuck on the island; she's moved on.

Questions Asked
Hurley seemed to sense or know the significance of Jacob's ashes; did he? How? Are they significant? 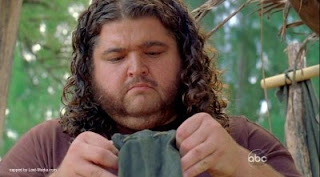 Any significance to the stick FLocke's whittling? 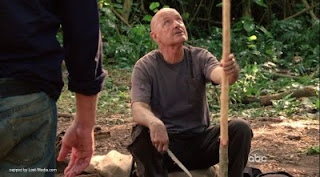 Again, what's the deal with the kid?

Does Desmond know the truth about FLocke? Desmond tells him he's John Locke: is there more Locke to FLocke than just his appearance, or is Desmond just playing dumb (or truly doesn't know better)?

So why isn't Desmond afraid?

Why did Sideways Desmond run over Locke? To get him to see the other reality (most "crossover" events have been triggered by love or near death experiences)? Or does it have something to do with Smokey having taken his form in the other reality? Is Desmond trying to take Locke out of the picture? 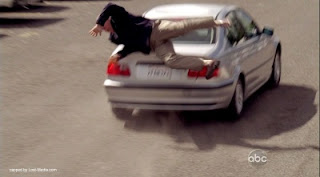 Next Week: The Last Recruit
You know when Gene Wilder's creepy tunnel/boat ride song from "Willy Wonka and the Chocolate Factory" is being used in the promo that something batshit insane is gonna happen.