"I figured you'd have to be living in a cave to not know about the Patriots and Colts game. That game is going to be wicked awesome." Scott McMullen, a resident of of Boston, Massachusetts and bonafide New England Patriots fan, said on Thursday, November 1st. "But apparently people living in huts in Somalia don't know about this game either!"
"The situation in Somalia is even worse than we thought," added Phil Martin, who hails from Evansville, Indiana and claims to be the biggest Indianapolis Colts fan of all time. "I thought it was bad when they didn't know it was Christmas time at all. But this Colts/Pats game is bigger than any Christmas could be and the Somalis won't even be able to see it! It's unconscionable."
On Sunday, November 4th the New England Patriots (8-0) will face the Indianapolis Colts (7-0) in Indianapolis for what seems to be football dominance. This is the first time in NFL history two undefeated teams play each other this late in the season. It has NFL fans buzzing with speculation and hyperbole. This football contest has been billed as "The Game of the Century" and "Superbowl 41 and a half". Debate has 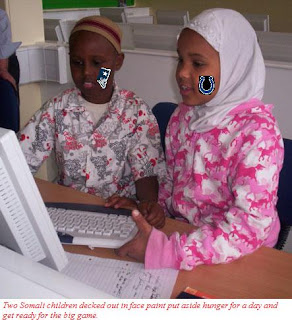 raged between fans and experts alike on podcasts, in sports bars, and in chat rooms regarding who will win. The latter of these places is where Scott McMullen met Phil Martin.
"If you told me two weeks ago that I'd be teaming up with PatsFan12," Martin noted, "I would've but punched your lights out. Yet here I am."
In an NFL chatroom McMullen (known as PatsFan12) argued with Martin (known as SluttyManningXOXO-M42) about this "clash of the titans" of a football game. Martin claimed that Indianapolis Quarterback Peyton Manning was the greatest quarterback of all time and would prove it on Sunday.
McMullen responded to this saying that New England Quarterback Tom Brady was, in fact, the greatest quarterback of all time. And when Tom Brady hooks up with, according to McMulllen, the greatest wide receiver of all time, Randy Moss, for 102 points the whole World would be in awe.
This was when another chatter by the screen name of GreenTeaSexpot52 (actual identity unknown) chimed in. GreenTea said that the World couldn't be in awe because only the United States would be watching this game. GreenTeaSexpot52 continued on to say that, for instance, people in Somalia have bigger things to worry about than the Patriots/Colts game, like eating. This revelation caused McMullen and Martin to join forces.
"GreenTea was absolutely right," Phil Martin conceded, "people in Somalia wouldn't be watching this game. They wouldn't see Peyton Manning prove his superiority."
"You mean Tom Brady," Scott McMullen corrected under his breath.
"Who won the last Super Bowl?" Martin asked McMullen.
"Who has the most rings?" McMullen rebutted.
After a brief scuffle and after a few bandages were applied the interview continued.
When Martin and McMullen realized that the starving people in Somalia would be submitted to the torture of not seeing the Patriots/Colts game they started the Non-Profit Organization of PPGGEPHGGEPIYDWWTGTYIQB (People for the Propagation of the Greatest Game Ever Played in the History of Greatest Games Ever Played and If You Don't Want to Watch This Game Then You're an Idiot or Queer or Both). Despite the massive amount of letters, the goal of the organization was simple. They wanted to send TVs and satellite receivers to all the residents of Somalia.
"Let's face it," Martin explained, "if this game can't end world hunger, nothing can."
"A lot of people are calling us heroes," McMullen added, "but I'm not having any of that. I'm no hero. Tedy Bruschi is a hero. That guy's wicked courageous!"
"He recovered from a stroke to play football," Martin said looking visibly annoyed, "big freakin' deal!"
"You've got no heart!" McMullen argued back. "Tedy is the truest of true heroes!"
After another, longer scuffle the interview resumed.
"Anyway," McMullen said getting back on track, "our organization is having great results. It even appears that we'll be able to set up a pseudo-sports bar for the Somali people to gather and watch the game."
"Yes," Martin agreed, "that should work out great. Especially since it seems the TV and satellites we are sending to individual families are reportedly being traded in exchange for food."
"It's so sad. Those Somalis just don't understand what's really important." Mullen began to tear up and failed to add that because of the large volume of TVs and satellites being shipped to Somalia the value for this hardware has decreased so much that they have become worth only a single maggot-ridden biscuit.
"This World can be so cruel." Tears flowed from Martin's eyes, too. The two men embraced.
"Don't worry Phil, we'll make sure the Somalis know what's important." McMullen consoled Martin, "We'll make sure the whole World sees how great the Patriots are."
"Colts!" Martin screamed back.
"Pats!"
"COLTS!!!"
"PATS!!!!!!!!"
Newer Post Older Post Home
Posted by Dr. Bitz at 1:31 AM