Hip to be Green

Kermit the Frog once sang a song about how it's not easy being green. Well, that's becoming not the case. Now, don't get me wrong. Being environmentally friendly still requires sacrifice and self discipline. But being green has slowly become the cool and hip thing to do. These days, I can recycle a plastic bottle without people thinking that I'm some hippie that never bathes and frolics through the forest naked. (OK, that happens to be true, but I hate the immediate assumption. Get to know me first and then judge.)
I always thought that the only way to make being an environmentalist cool was by making the outdated slogans that are used hipper. Let's face it, slogans like "Give a hoot, don't pollute", "Only you can prevent forest fires", and "Please be kind, rewind" simply don't resonate with today’s kids. I figured using slogans like "Stop playa' hatin' the environment", "Make not starting forest fires your bitch!", and "Rewind...foo" would really strike a chord with the youth of America. I was wrong. It really only took one person to make environmentalism cool, Al Gore. You heard me right.
Al Gore made being environmentally conscious cool.
Read that sentence again and try to absorb its complete meaning. Be careful though, your head may explode.
If seven years ago you told me that in the future being green would be cool then I would've laughed in disbelief. If you told me that in the future Al Gore would make ANYTHING cool then I would've slapped you and called you a liar. If you told me that in the future Al Gore would make being environmentally conscious the cool thing to do, then I would have had you committed. But you would have had the last laugh because you would have been right and I would have had to say I’m sorry. Although, I doubt my apology would make up for the years of genital electroshock therapy that you’d have endured. But a guilty conscience would be the cross I'd have to bear. Unfortunately, the inability to be aroused or procreate would be the cross you’d have to bear.
Anyway, my point is being green is cool now and we have Al Gore to thank for that. But I’m a bit wary of this. You see, I’ve been pro environment for a long time. It's not like I've given up all my possessions and live off the land, but I do try to do my part. And I’ve been this way long before it was the ‘cool’ thing to do.
Now, this isn’t a rant like how someone thinks some indie rock band is cool, and then the band becomes popular and that person gets all bitter that everyone else likes the band now because it makes that person less special or makes everyone else posers or...some reason. But speaking of which, what’s up with that? You spend all this time talking about how great something is and how you wish everyone could see how great it is but now you’re upset that people agree with you? Shouldn't you be happy that what you like is now popular and more accessible? Oh well, I’ve been guilty of such bitterness myself from time to time, so I can’t talk about it too much without being a hippogriff.
No, the environment is much bigger than a rock band or TV series and is not something to be petty or jealous about. I’m glad that more people are being environmentally conscious. I’m just suspicious of their motives.
On the one hand, it doesn’t matter why you’re being environmentally conscious just as long as you are. The results are the same regardless of motive. Who cares if you recycle because it’s the right thing to do or just because you’re trying to be cool? The point is you're recycling and that’s a good thing to do. However, what will happen when recycling isn’t considered the cool thing to do anymore? That’s where I worry.
I’m worried that this whole movement to be green is a fad. And that, like all fads, it will die away and once again, when I recycle, people will think I’m a dirty hippy that smokes pot all day and can’t get a real job.
I hope people realize that you can’t just be green while its hip, being green has to be a complete lifestyle change. If people make only a short term attempt to aid the environment than the effects will be minimal and we won’t be any better off than before Al Gore stormed onto the scene.
However, if everyone abides by these lifestyle changes and does what they can to help out the environment for rest of their lives, then I think we can have a positive effect on this planet and this generation can leave the Earth in a little better shape than how we received it. That’s what I hope for.
Of course, if being green does go the way of the slinky and yo-yo, then we can always count on Pimp Gangsta’ A Doggy G to make it hip once more. 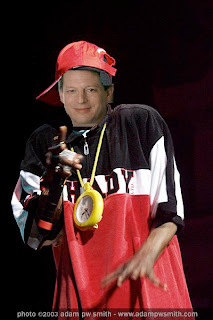 Waddup yo! Big ups to trees, mad props to clean water, and recycling is nowhere near the hook. Word!
Newer Post Older Post Home
Posted by Dr. Bitz at 1:35 AM

Email ThisBlogThis!Share to TwitterShare to FacebookShare to Pinterest
Labels: Environment