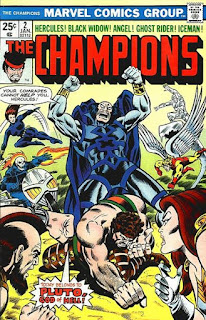 In a Nutshell
Pluto steps up his plan as the Champions battle the Huntsman.

Plot
Hercules, Angel, Iceman, Black Widow, Venus & Ghost Rider fight Pluto, Hippolyta & Ares, forcing the gods back to Olympus through a portal, which Iceman then seals with ice. On Olympus, Pluto reveals how he's formed a mutual defense pact with other underworld lords, which he uses as leverage to force Zeus into enforcing Pluto's arranged marriages. Back on Earth, Ghost Rider completes a sweep of the UCLA campus and reports all their previous mythological foes have vanished, but just then, the Huntsman, sent by Zeus, attacks Hercules and his allies. The Huntsman in turn summons the massive Menoetius to battle the heroes. Under Black Widow's leadership, the group fights back, but the Huntsman manages to trick Ghost Rider into turning his hellfire on his allies, knocking them out. Huntsman then escapes to Olympus with Hercules & Venus, leaving Black Widow, Angel, Iceman & Ghost Rider despairing over how four mortals can possibly track somebody to Olympus.