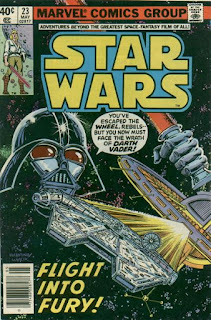 In a Nutshell
The Star Warriors escape the Wheel and evade Darth Vader.

Plot
Luke exits Greyshade's yacht, angry that Leia agreed to leave with him and upset after watching Han die in the arena, gunned down by Chewbacca. In the arena, however, Han turns out to have faked his death, and after Chewbacca defeats the final contestant, he leaves carrying the "body" of his friend. Just then Commander Strom suddenly storms into the casino, having recovered from the drug Greyshade slipped him. He orders his troops to take control of the station, and to kill Greyshade and the rebels on sight. Master-Com manages to warn Greyshade, but the Stormtroopers destroy his body, just as another group of troops accost Han and Chewbacca en route to the Falcon. Just then, Luke senses the arrival of Darth Vader just outside the Wheel. Back aboard the station, Master-Com, in a new body, rendezvous with R2-D2 and helps him broadcast his recording of the Wheel's security guards reclaiming the money stolen by the Empire, inciting an uprising against the Imperial forces. 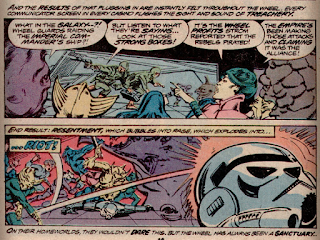 As Han and Chewbacca fight their way to the Falcon, Greyshade lays down covering fire, enabling Luke, Leia and Threepio to escape aboard his yacht, while Master-Com jettisons Artoo in an escape pod to be picked up by the yacht. Master-Com then reunites with Greyshade, and the two friends face off against Strom, triggering an explosion that kills them all. Outside, Vader's Star Destroyer targets the yacht, but Han attacks it, preventing the ship from getting a tractor beam lock. As Vader turns his attention to the Falcon, Luke channels all his rage and frustration and fires it at Vader through their connection in the Force. The resulting pain is intense yet brief, but enough of a distraction to allow both Greyshade's yacht and the Falcon to escape into hyperspace, with Luke resolving to master the Force in order to defend against Vader.

Firsts and Other Notables
Both Commander Strom and Senator Greyshade seemingly die this issue, taken out via a proton grenade triggered by Greyshade to cover Luke & Leia's escape from the Wheel. We never actually see Strom's body and Greyshade's death is only implied, but neither has yet to appear anywhere since this issue. 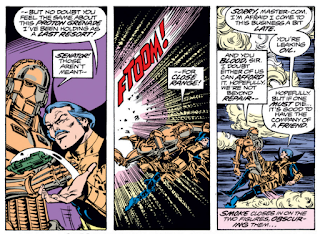 A Work in Progress
This issue suggests that Imperial officers receive training to resist the effects of drugs. 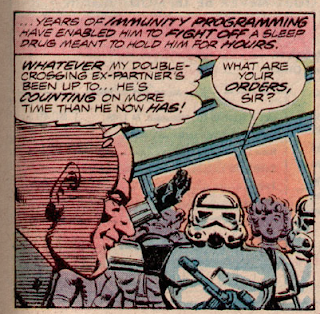 Continuing the vague anti-droid sentiment suggested in previous issues, Stormtroopers find the concept of Master-Com believing himself a friend of Greyshade "obscene". 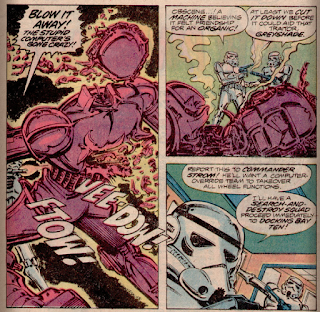 In what I assume is meant to be a running gag at this point, Chewie loses the money he won in the arena in the process of escaping some Stormtroopers, meaning that once again, despite a significant windfall, circumstances have conspired to keep Han and Chewbacca broke and unable to pay back Jabba the Hutt. 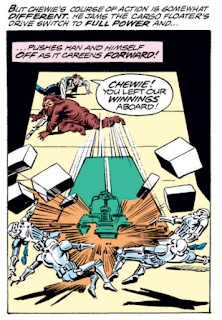 Um, Actually
Luke is able to defeat Darth Vader by channeling all his rage and frustration through the link in the Force formed between them during their early connection (which triggered Luke's coma-like state earlier in the story), which seems like exactly the kind of thing Yoda will go on and on about Luke NOT doing in The Empire Strikes Back. 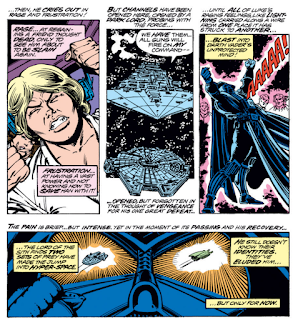 The Space-Lexicon
Han says Stormtroopers are as persistent as Tatooine Sand Lice. 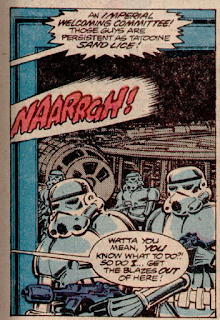 You Kiss Your Sister With That Mouth?
Distraught over Leia agreeing to runaway with Greyshade, Luke almost calls her the girl he loves. 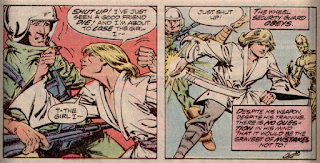 In a flashback to shortly after Leia made her decision, they kiss goodbye. 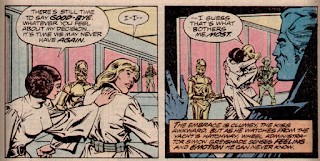 Teebore's Take
A thrilling wrap-up to the "Wheel Saga", as everything comes to a head just as Darth Vader arrives in the space near the Wheel, the heroes barely escape and Senator Greyshade burgeoning altruism leads him to sacrifice himself after declaring his friendship with Master-Com. This particular issue also does an effective job of showing what it's like to live in the Empire, with Strom ordering his Stormtroopers to occupy the station, which they do with chilling effectiveness. Only the Wheel's relative independence gives it denizens the courage to rise up, and the whole thing plays out like a microcosm of what must be happening all over the galaxy at this time.

Also surprisingly effective: though Vader factors into the climax of the story, he's still kept at a relative distance, never boarding the Wheel nor interacting with any of the main characters face-to-face. He and Luke have a confrontation of sorts, but a mental one, with each remaining on their respective ships throughout it. It goes to show just how careful Goodwin is being in how he deploys the villain: this is the first story to feature the character since the original adaptation, but even still, he's used sparingly, and readers are never given the direct conflict they may have been led to expect. But instead of feeling like a ripoff, that sparse use just adds to the villain's menace, building up the tension for his next appearance.

Overall, the "Wheel Saga" is without a doubt the series' best story yet. It's a bit decompressed (issues #21 & #22 probably could have been condensed into one) and suffers, yet again, from keeping the main characters separate from one another for far too long. But in the scheming Strom and morally ambiguous Greyshade the story has a pair of antagonists that provide it with an enjoyable level of nuance and surprise, with Greyshade even getting something of a character arc as he slowly gives in to his conscience. The development of Master-Com's affection for Greyshade and yearning for something more out of his existence gives the story a bittersweet twinge, while Darth Vader is used effectively, both to increase tension and to help keep the story tethered to the larger narrative begun in the first six issues (something the previous two stories failed to do, to their detriment). Each of the heroes is given at least one moment to shine (including Artoo, and no good Star Wars story is complete without at least one moment of Artoo-Detoo saving the day), and while Han and Chewie remain, arguably, the series' most developed characters, it can't be said that any one character dominated this story. All in all, it's a new high watermark for the series.

Next Issue
A retro tale of Obi-Wan Kenobi.