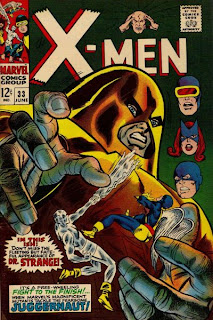 In a Nutshell: Cyclops and Marvel Girl search for a means to defeat Juggernaut.

Plot: While Juggernaut mows down the National Guard on his way to steal an airplane and join Factor Three, the X-Men probe the comatose Professor X's mind for a way to defeat him. They watch as hundreds of years ago the Ancient One does battle with Xorak, the guardian of the temple of Cytorrak, ending when the Ancient One banishes Xorak to the Crimson Cosmos. The X-Men repair Cerebro and try to use it to contact the Ancient One, but reach Dr. Strange instead. Dr. Strange teleports Cyclops and Marvel Girl to the temple and teaches them an incantation to send them into the Crimson Cosmos in search of the Ruby of Cytorrak's (from which Juggernaut gets his power) prototype.

While the other X-Men fight a delaying action against Juggernaut, Cyclops and Marvel Girl battle Xorak, now calling himself the Outcast, in the Crimson Cosmos. They defeat him and claim the prototype ruby, returning to Earth. They shine the ruby on Juggernaut, which weakens him. Determined to destroy the stone, Juggernaut takes it from Cyclops and is instantly transported to the Crimson Cosmos, trapping him in Xorak's place.  The triumphant X-Men return home only to discover that in their absence, Factor Three kidnapped Professor X!

Firsts and Other Notables
Dr. Strange (who Dr. Bitz would love to tell you all about) makes an appearance, as does his mentor, the Ancient One (in a flashback). The good doctor, via his astral form, teleports Cyclops and Marvel Girl to Cyttorak's temple in Korea, teaches them an incantation that allows them to enter the Crimson Cosmos, then returns to his own adventure (taking place in Strange Tales #157). 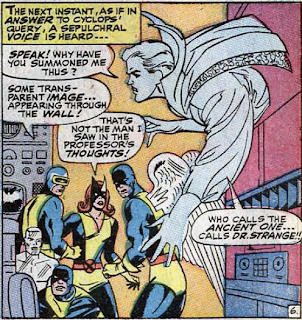 A Work in Progress
Factor Three's abduction of Professor X takes him out of action for several issues (he'll return home in issue #39). 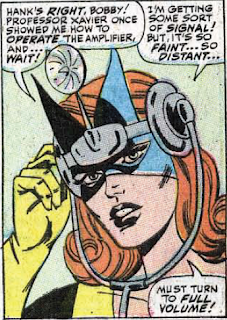 Beast, Iceman and Angel take the X-copter to fight Juggernaut, while Marvel Girl and Cyclops later follow them in the X-jet. The helicopter is destroyed when the X-Men basically throw it at Juggernaut. 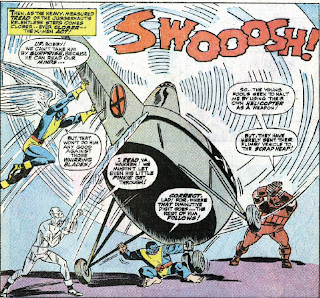 Ah, the Silver Age
The original cover of this issue featured generically gargoyle-ish Xorak the Outcast in place of Juggernaut, but the Comics Code Authority felt the image was too scary so Marvel dropped in Juggernaut instead. 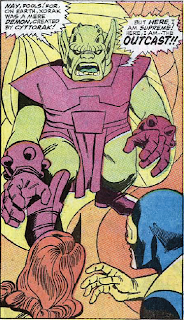 Boy, that sure is scary...
Build up your Vocabulary with Beast: Temerity
\tə-ˈmer-ə-tē\. Noun. Unreasonable or foolhardy contempt of danger or opposition. 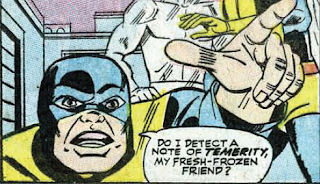 Young Love
When Dr. Strange tells the X-Men that only two can journey to the Crimson Cosmos, Deputy Leader Cyclops picks Marvel Girl to accompany him. But is it for the right reasons? 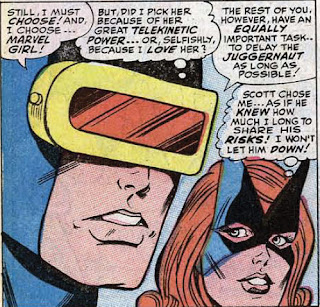 For Sale: Something tells me this never caught on... 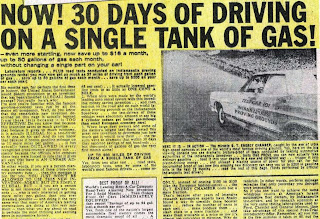 It's in the Mail: A letter in defense of serialized stories. 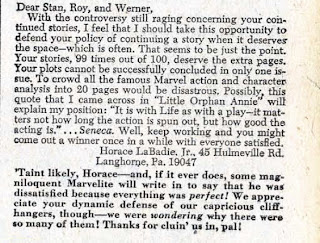 Teebore's Take: The conclusion to Roy Thomas' first Lee/Kirby riff comes across as yet another story that would be more at home somewhere else (this time, Dr. Strange's feature in Strange Tales). Unfortunately, the art does this issue no favors, as the key to a good interdimensional, mystical story like this is vivid, distinctive art, and the workmanlike Werner Roth (whose art I've come to appreciate more re-reading these issues) simply isn't up to the task (regular Dr. Strange penciller Steve Ditko, he's not). As a result, the scenes inside the Crimson Cosmos are flat and uninteresting, and things like the timeless nature of the Crimson Cosmos causing Marvel Girl's watch to destroy Xorak come across as bland and silly instead of cool and trippy.

The issue isn't a total wash, though. The X-Men as a whole are outmatched by Juggernaut, so watching just Angel, Beast and Iceman (at this point, arguably the team's three weakest members) try to slow him down is fun, and the cliffhanger abduction of Professor X finally takes Factor Three out of the realm of subplot. We're now in the midst of Thomas' unique-for-the-time epic.
Newer Post Older Post Home
Posted by Austin Gorton at 9:00 AM