Retro Review: War of the Simpsons 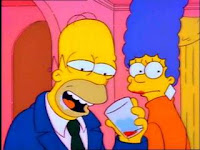 Or the One Where: Homer and Marge go to a marriage retreat.

The Setup: After Homer gets drunk and makes an ass of himself at the Simpsons' cocktail party, Marge signs them up for Reverend Lovejoy's marriage retreat.

Firsts and Other Notables: Though not named until next season, Springfield's resident criminal Snake makes his first appearance (attending the wild party Bart and Lisa throw while their parents are away).

Gloria, the woman who attends the marriage retreat along with the Simpsons and the Flanders, is voiced by Julie Kavner. It's one of the few characters aside from Marge and her family that she's voiced.

Homer: Never thrown a party? What about that big bash we had with all the champagne and musicians and holy men and everything?
Marge: That was our wedding!
Homer: Oh.

Marge: Grampa, could you do something?
Grampa: I can dress myself.

Rev. Lovejoy: A marriage can't be reconciled in a few hours, Homer. It takes a whole weekend to do that!

Ned: Sometimes Maude (God bless her), she underlines passages in my Bible because she can't find hers.
Homer: Lucky they don't keep guns in the house... 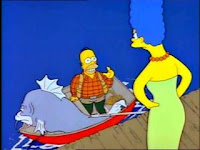 Teebore's Take: This is an episode which, unlike many recent episodes, manages to follow through on a strong first act (featuring Homer's drunken cocktail party antics) with a hilarious third act (featuring Bart and Lisa's wild, unsupervised party and Homer's struggle with the mythic catfish, General Sherman). In between the two parties is another "Homer and Marge's marriage is in trouble" story, though at this point that particular well hadn't been gone to as often as it has these days (if memory serves, this is the first such use of the plot in season two, unless you count the final third of "Bart Gets Hit By a Car"). Plus, this particular iteration of the plot is much more down to earth and character-driven than later installments, making it more enjoyable and less ridiculous (compare "Homer drinks too much and embarrasses Marge so they go on a marriage retreat" to "Marge gets mad when Homer lets the mob film a porno in their living room so she runs off and falls in love with a marine biologist specializing in the study of manatees*").

*Eerily enough, I wrote this post yesterday, and then "Bonfire of the Manatees" was on TV last night...

Two great party scenes highlight a Homer/Marge episode that doesn't feel contrived or played out. Grampa also gets a great moment at the end when he reveals how thoroughly he manipulated the kids. 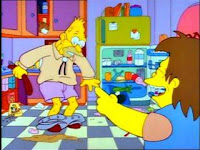