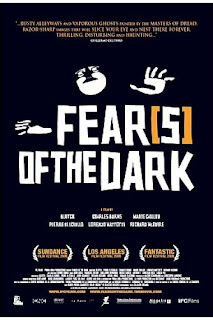 Horror is, of course, quite subjective. Some people are scared of roller coasters or mimes or being poor or dying unloved. This film examines the minds of some international artists and answers the question - What scares you?

Drawn in brilliant black and white, Fear(s) of the Dark, or Peur(s) du Noir (2007), is an animated horror anthology that should leave an indelible mark on your skin.

We Americans tend to inhibit our imaginations and use politically correct communications when getting a point across. Thank the Creator for foreigners with their drugs and whacked out styles. There were a few times during my viewing of the film I had to turn away and let loose the shivers.

In a world of Disney and Pixar, I had never seen animation like that displayed by the six talented artists working on this film. I'm very eager to research who they are and what else they have released.

If you rent the DVD through NETFLIX, make sure to watch the trailers beforehand. There's a movie out there about some "evil" children who do some nastiness to a kitty that left me rolling (hint - the Romans did this to people!). I believe it was called HOME MOVIE. Anyone seen it?
Newer Post Older Post Home
Posted by boots~ at 12:01 PM